Photo Illustration created by HDIAC and adapted from U.S. Army photo (Available for viewing at https://asc.army.mil/web/news-alt-jfm18-speeding-combat-casualty-care/).

Major medical and technical advances in combat casualty care have significantly improved the military’s ability to safely and effectively move wounded warfighters from tactical field care to in-hospital care. Studies have shown that wound infection, potentially due to insufficiently closed cutaneous closures, can be as deadly to the warfighter as the initial injury itself [1]. Conventionally, surgical closure and treatment of tissue defects is achieved by sutures, staples, or wires, which are not sufficient for repairing defects in highly stressed elastic tissues. Therefore, the application of adhesives for certain types of wounds is essential. There are also other issues related to sutures or staples, including limited access to defect sites. Even in tissues that can be sutured, the use of adhesives may be necessary to allow for better sealing, such as in the closure of small stitching channels in a sutured artery wall. With these issues in mind, we aimed to synthesize an inexpensive, highly adhesive, biodegradable and biocompatible naturally derived sealant—methacryloyl-substituted tropoelastin (MeTro glue) [2].

Significance and Applications of MeTro Glue

The fabrication of MeTro glue is based on simple and fast photopolymerization using blue visible light or ultraviolet light. This polymerization technique is an inexpensive and technically simple approach to fabricate adhesives for particular surgical applications, especially those conducted in austere environments. During surgery, this sealant can be applied over the defect site as a liquid and rapidly cured—causing it to adhere strongly to soft tissues, stopping air and liquid leakages, and providing a more rapid time frame for tissue repair.

Due to the presence of tropoelastin, as soon as MeTro glue comes into contact with tissue, it solidifies into a highly flexibleand elastic gel. It can then be further cured at the defect site by a short, light-mediated crosslinking to form an immediate bond—taking less than 60 seconds to seal the defects. The elastic properties of this glue give it an extensibility of more than 400 percent, which makes it a suitable biomaterial for engineering elastic tissues. MeTro’s improved extensibility and rapid curing time make it well-suited for a tactical combat care environment, where wounded warfighters must be swiftly stabilized, and where evacuation methods may make it difficult to keep wounds fully immobile. 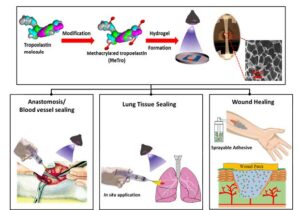 Figure 1. Synthesis of MeTro glue and its application in various surgical areas.

In order to translate the application of MeTro glue from animal to human use, our current study specifically evaluated the in vivo performance of the engineered hydrogel sealant in a rat and porcine lung leakage model. The experiments proved that MeTro is suitable for the sealing of significant pulmonary defects in large animals in the absence of additional suturing/stapling and facilitated fast wound healing. In terms of hemostasis, MeTro glue was sufficient in stopping mild hemorrhage from the generated rat and porcine lung lesions.

Thorough investigation of the actual hemostatic potential of the sealant should be performed in adequate bleeding models, such as a liver laceration model. In this context, appropriate modification of MeTro glue may allow for the creation of an effective sealant with strong hemostatic properties. Because pulmonary airways are a non-sterile environment, frequently evoking severe infections after lung surgery or other wounds, antibacterial functionality may be another desirable property of a pulmonary sealant [4]. This feature could be provided by including metal oxide nanoparticles, nanoparticle-carried antibiotic drugs, or antimicrobial peptides within the sealant. The next step is to test MeTro glue in clinical trials, in order to effectively investigate its functionality in a real-world setting.

MeTro glue is a highly promising solution to the Department of Defense’s (DoD) growing need for novel and effective wound treatment strategies. According to recent publications outlining emerging requirements for combat causality care, there is a persistent need for medical technologies with minimal logistics footprints that can be used in austere environments [5]. Because each use of MeTro does not require supplementary equipment like sutures or staples to work, and has an estimated shelf life (at room temperature) of up to 10 years, it can meet the need of low maintenance supply chain trauma care solutions posed by the DoD.

MeTro glue has the potential for application as a highly biocompatible, elastic adhesive for use at each echelon of combat casualty care to reduce the mortality and morbidity associated with major wounds and injuries. In the case of surgical applications, it can be used as a sealant/bioadhesive to seal wounds (e.g., lung, skin, arteries, heart, nerves, etc.) after surgery. In austere environments, it can easily be sprayed or pipetted onto the wound area for both superficial and deep injuries. Regarding the ease of synthesis and application, our results show that MeTro’s flexibility helps to minimize damage to adjacent tissue caused by avoiding mechanical compliance mismatch. MeTro glue offers strong potential for use as a surgical sealant in commercialized contexts and combat casualty care.