The A-Z of the AB Effect (Source: Physics World).

We just received a TI that seems more in the alternative energy field, and so I was wondering if you all might want to take it. Below is what we received:

In January 2019, “Doctor” Andrea Rossi posted a non-refereed preprint on ResearchGate entitled, “E-Cat SK and long-range particle interactions:” https://www.researchgate.net/publication/330601653_E-Cat_SK_and_long-range_particle_interactions.
This preprint has over 44,000 Reads and 365 Recommendations. Rossi claims that he has built and commercialized a 22-kW “space heater” that runs on “virtual particle reactions” involving “dense exotic electron clusters,” the “Aharonov-Bohm effect,” “proton-electron aggregates at the picometric scale,” and “zitterbewegung.”

My question for DSIAC is, would any of these concepts be physically possible? If any of this is true, then it would seem to be an enormous advance in energy technology. Rossi claims to have several of these “E-Cat SK” devices in commercial operation in the U.S. [1]

HDIAC analysts conducted research to provide data on current information regarding the concepts of “electron aggregates,” “virtual particle reactions,” the “Aharonov-Bohm Effect,” and “Zitterbewegung.” The analysts undertook a literature review of current research from the Defense Technical Information Center Research and Engineering Gateway, the results of which are provided in this report.

A vacuum is a volume of space that is completely devoid of any particles of matter so that the pressure within the space is zero. Due to the lack of matter, the energy within this space is zero. A zero-energy space allows room for particles known as virtual particles to come into and out of existence [2].

Virtual Particles
Werner Heisenberg’s uncertainty principle is the phenomena that allows for these “virtual particles” to come into existence. Heisenberg’s principle states that both the exact position and energy of a particle cannot be known. Because of this, the exact energy of the system cannot be known and will experience fluctuations. These fluctuations are explained and created by a particle and its corresponding antiparticle, such as an electron and a positron, coming into existence and then annihilating each other instantly [3].

Within a vacuum, electrons and positrons are continuously being created and destroyed by each other. A small portion of these virtual particles will randomly not destroy each other immediately. Instead, they will either be separated by an outside force and a free electron and positron will be located within the area, or they will be in orbit of each other until they eventually meet again and are destroyed [4].

Within a vacuum tube, these free electrons will appear and form “electron aggregates” and form what is known as “space charge.” These aggregates appear throughout the entire vacuum tube and impede the electron flow from one side of the tube to the other. The electrons of most importance will be the ones that are located at the cathode as they will directly stop the electron flow and the current will be increased in order to get past it [5].

The Aharonov-Bohm Effect is a description of when a charged particle is affected by an electromagnetic potential despite there being no magnetic or electric field at the point of the particle [6]. 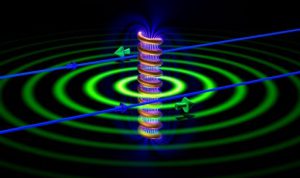 The Zitterbewegung motion is the theory used to marry these two truths. The motion described by it is where the electron constantly moves back and forth at the speed of light at an extremely small distance, with the net movement of these back and forth movements being the observable velocity of the electron as shown in Figure 2 [9, 10]. 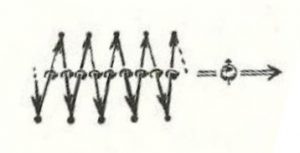 Figure 2:  Movement of electrons and other particles according to the Zitterbewegung Theory [9].

The concepts of virtual particles, the Aharonov-Bohm effect, and Zitterbewegung are concepts derived from current quantum theory. They come about due to the nature of quantum mechanics and how it is impossible to know both the exact position and energy of a single particle at the quantum level. Aharonov-Bohm and Virtual Particles are seen in the real world and have been proven through experimentation. Zitterbewegung’s motion is shown as a product of the Dirac equations, which describe the motion of the electrons and the realities observed. The ability to assess the commercialization of an E-CAT SK system based on these principles, however, exceeds the scope of the 4 hours of free technical inquiry service provided to users. Should additional research be desired, it can be provided on a customer-funded basis. Additional information can be found on the HDIAC website: www.hdiac.org.

[10] K. H. Knuth. The Problem of Motion: The Statistical Mechanics of Zitterbewegung, 2014.