Applications of Nanotechnology in Military Medicine: From the Battlefield to the Hospital and Beyond – HDIAC

Applications of Nanotechnology in Military Medicine: From the Battlefield to the Hospital and Beyond

It is not enough for a nation to have a strong military force.  It is equally important to ensure that the fighting force has the best possible medical equipment and techniques before, during, and after combat.  Battlefield medicine has been evolving over the course of millennia.  The more advanced a military’s wartime medical capabilities, the more likely the combatants are to survive, recover faster and more completely, and return to duty sooner.  Emerging technologies always play a fundamental role in bolstering the firepower and strength of a nation, but also the survivability of military personnel through medical improvements for the warfighter, both on and off the battlefield.

Innovations, such as the tourniquet, ambulance, antibiotics, fluid replacement therapy, and field hospitals, dramatically increased survival rates during combat and helped return personnel to active duty more quickly.  Medical improvements during the critical initial period of injury increase the chances of survival and minimize the long-term impact of injury.  Improved medical technologies during rehabilitation can shorten recovery time and improve the quality of life for service members who either return to active duty or return to their civilian lives.  One technology proving multiple applications to medical care during and after combat is nanotechnology.

Nanotechnology involves creating and using materials and devices on a scale of nanometers, one-billionth of a meter.  Several advantages to having access to materials on this scale include a drastic increase in surface area to volume ratio, the ability to directly target specific tissues, and the ability to create new and novel shapes of particles. These advantages are critical in nanotechnology’s medical possibilities.

Military medical practice spans every aspect of health care from preventive services such as vaccinations, to combat casualty care, to long-term convalescence.  Military medicine presents unique challenges, especially concerning combat injuries in terms of epidemiology, mechanism of wounding, pathophysiologic trajectory after injury and outcome [1].  Medical advancements are applied to troop health when possible and practical; and in some instances, technological innovations in medical delivery originated in military practice and spread to civilian use.

Discussions began as early as 2002 regarding nanotechnology’s use in military medicine.  The 15th Conference on Military Medicine outlined practice changes, such as remote monitoring of patients, faster diagnoses, less invasive procedures, and sustained pharmaceutical release, which might result from nanotechnology applications [2].

Medical applications of nanotechnology span a range of possibilities, but they generally fall into four categories:

Each category has direct applications to military medical practice, but some of the most promising medical applications of nanotechnology for military medical use fall under pharmaceuticals and drug delivery systems and tissue engineering/surgery and include solutions for hemorrhage control, wound management, tissue regeneration, and drug delivery.

The majority of combat injuries (70-80 percent) in today’s military operations are penetrating, mostly caused by explosive munition fragments [1].  These types of wounds offer unique challenges to medical providers both on the battlefield and during long-term care.

Using dressings and bandages to manage combat injuries dates back to time immemorial.  However, recent advances in field dressings, including the use of chitosan, silver nanoparticles, and copper, may offer improved outcomes following battlefield injuries.  Chitosan is a biodegradable, nontoxic, complex carbohydrate derivative of chitin, which is a naturally occurring substance primarily found in the exoskeletons of insects [3].  Several products contain chitosan, including HemCon ChitoFlex and CELOX Chitosan Gauze.  A recent development using nanoparticles of chitosan, pectin, and titanium dioxide shows a significant wound closure rate compared with conventional gauze and chitosan alone [4].  Another development found that using a nonwoven mat coated with nanoscale chitosan and tea tree oil significantly reduced bacterial activity after seven days compared with controls [5].

Wound treatment in long-term care settings can be quite different than treatment on the battlefield.  Nanofiber scaffolding using fibrin and other naturally derived products with blood-derived growth factors has been used to encourage new tissue growth and improve wound healing with promising results [6,7], and nanostructured silk fibroin could lead to next-generation skin grafts [8].  Another promising product in wound treatment is Nanoflex powder, which is a mixture of two different types of nanoscale materials [9]. When applied to a moist wound, the powder expands and fills dead space in the wound and seals the wound margins, thus protecting the wound during healing.

Silver, long used to fight infection due to its antimicrobial properties, and silver nanoparticles show great promise in reducing infection rates.  Acticoat is one such product that uses silver nanocrystals applied to either a rayon or polyester core [10].  Nanoscale copper is another promising antimicrobial agent shown to improve wound healing [11].  However, both silver and copper nanoparticles have the potential to be toxic to cells, and further evaluation of their long-term health effects must be studied.

Uncontrollable hemorrhage is the largest single cause of combat deaths and accounts for more than 80 percent of deaths on the battlefield [12].  Although the tourniquet still remains the most effective first-line method to control hemorrhage in extremity wounds, the use of homeostatic agents and fluid resuscitation play an extremely important role in preventing death from blood loss.  The amount of blood volume lost directly impacts blood pressure, and the risk of death drastically increases as blood pressure falls [1].  Nanotechnology may play an important role in improving coagulation and enhancing fluid replacement therapy.

One of the body’s primary components in preventing blood loss are platelets, tiny blood cells that bind together to form a clot.  A platelet-like nanoparticle was developed using spherical polystyrene nanoparticles coated with poly (allylamine hydrochloride) and bovine serum albumin [13].  The platelet-like nanoparticles mimic four key small attributes of platelets: (1) they were disc shaped; (2) they had mechanical flexibility; (3) they aggregated through similar mechanisms demonstrated in biologically real platelets; and (4) they had the presence of ligands that facilitated adhesion.  When introduced to a wound, these particles accumulated at the site and reduced bleeding time by 65 percent.  Applications in the field could potentially include the development of an injectable form of these particles.

One study also demonstrated the effectiveness of using intravenous hemostatic nanoparticles (i.e., synthetic platelets) to reduce bleeding following blast injury in mice [14].  In addition, a recent study demonstrated the effectiveness of silica nanoparticles in assisting coagulation [15].  The introduction of silica nanoparticles shortened coagulation time and increased the activation of factor X, which is another important component of clotting.  A similar effect to mitigate internal bleeding was noted using hemostatic dexamethasone nanoparticles to treat lung injury after blast trauma [16].  Also demonstrated was a novel wound closure method using a combination of gold nanorods coated with hyaluronic acid and a laser to seal lacerations in the carotid arteries of rabbits [17].  This application could lead to more effective wound closure at earlier stages in the medical evacuation process.

Red blood cells are a primary volume expander used to control massive blood loss.  Some difficulties with using blood replacement on the battlefield are gaining access to enough blood and storing it effectively.  One solution would be to use artificial red blood cells. While first reported in 1957, recent advances in nanomaterials allow creation of much smaller particles.  A red blood cell substitute can be created using nanocapsules made of biodegradable polymers containing enzymes and hemoglobin as illustrated in Figure 1. 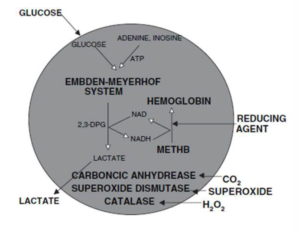 Nervous system injuries are some of the most severe and complicated injuries to manage.  Nerve cells, including neurons, do not divide and regenerate like many other cells do.  Typically, nerve injuries result in permanent loss of function or mobility.  Recent work describes the use of silk protein in a hydrogel scaffold to repair peripheral nerve injury, which resulted in a significant improvement of the nerve cells [18].  Other fibers, such as carbon nanotubes coated with various naturally occurring materials show similar effects [19].  Carbon nanotubes have also been explored for use in bone tissue engineering [20].  Another paper provides an excellent review of nanofiber technology used in tissue engineering [21].

One of the most anticipated uses of nanotechnology in medicine is for the development of new classes of pharmaceuticals and drug delivery systems, especially for targeted therapies. Targeted drug delivery systems offer several advantages versus traditional drug administration routes including:

Table 1 shows a list of some nanoparticles and their applications in drug delivery.  A new generation of anti-infectives are being developed using antibacterial nanoparticles.  These alternatives offer new options to fight disease, especially with the existence of antibiotic-resistant strains of bacteria. These new medications may also prove to be more effective countermeasures to biological warfare agents. 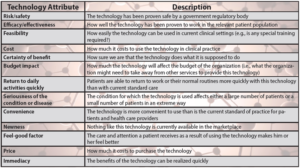 Nanomedical techniques using liposomes, emulsions, polymer-based nanoparticles or carbon nanoparticles could be used to create needleless vaccine delivery systems that can be delivered directly to target tissues [23].  Nano-enabled techniques like this can increase the number of different types of vaccines that would be available leading to a reduction in the volume of vaccine required for individual administration, less discomfort for patients, easier transport to remote locations, and greater efficacy of the vaccine to produce an immunologic response [24].  More effective vaccines, produced more rapidly, would offer a tactical advantage to troops deployed to areas with emerging diseases or to hostile territory where the use of biological weapons is a threat.

When evaluating the implementation of any new technology in healthcare, 13 attributes must be assessed, and the effective use of nanotechnology for military medicine is no exception.  It is also important not to discount an innovative technology because it may fall into one of these common criticisms:

Not unlike its cousins in innovation that have come before, nanotechnology has serious potential to radicalize the treatmentof military personnel before, during, and after combat operations.  Applications of nanoscale powders and solutions, such as silver and chitosan, offer enhanced healing capabilities and lower the risk of infection during long-term wound treatment.  The use of artificial platelets and red blood cells could prove effective in minimizing blood loss in traumatic hemorrhage.

Nanotechnology also offers the promise of creating more efficacious vaccines and anti-infectives, which could be deployed easier to combat areas and remote locations.  Although nanotechnology is still very much an emerging technology, it is important to not discount its ability to revolutionize military medical care, especially now as the nanotechnology enterprise focuses more on the use of engineered nanomaterials in systems.  However, it is still advised that specific applications of nanotechnology be evaluated for patient and healthcare worker safety, cost effectiveness, and technological improvement over current practices.  The important takeaway is that even though nanotechnology has been actively researched for its potential use in military medicine, there are still many more opportunities to improve warfighter health that can and should be investigated.

Greg Nichols is the program manager for the Nanotechnology Studies Program at ORAU in Oak Ridge, Tenn., where he provides expertise on nanotechnology-related topics. Previously, he supported a variety of occupational and environmental health projects for corporate and government clients. Nichols spent 10 years in various healthcare roles. He has published on a variety of topics in peer-reviewed journals and co-authored a book chapter on the use of epidemiology in risk assessment. He has a bachelor’s degree in philosophy and a Master of Public Health degree, both from the University of Tennessee and holds the Certified in Public Health credential.