Neuroscience and Technology in Defense Contexts

Recent convocation of participatory parties in the Biological and Toxins Weapons Convention has prompted a renewed focus upon which, how and to what extent currently available and/or new biotechnologies and techniques could be developed, weaponized and utilized. In this light, it becomes important to reconsider current progress and near future research and development of neuroscience and neurotechnology (i.e., neuroS/T), and the potential to employ neuroscientific tools and products in various domains of national security and defense.

At present, neuroS/T is being used in military contexts: 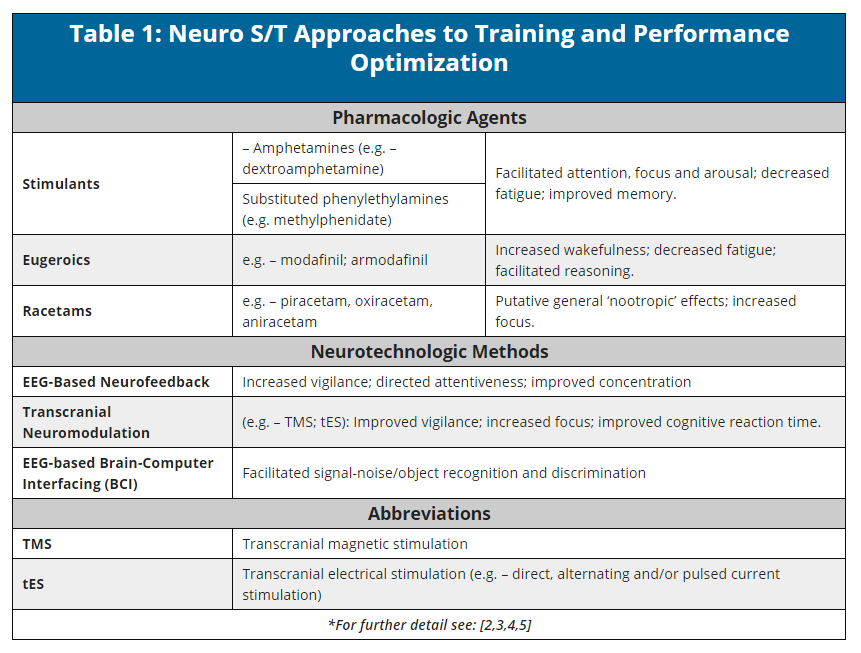 In the main, it is the latter two types of application that foster the most concerns. For example, as depicted in Table 1, a variety of pharmacological agents (e.g., stimulants, including amphetamine derivatives; eugeroics, such as modafinil; and nootropics, such as the racetams) and brain-machine interfaces (such as EEG-based neurofeedback, transcranial magnetic and electrical stimulation, and brain-computer interfaces) can be employed to modulate activity within identified neurological networks operative in cognitive and motor processes and functions to facilitate and/or optimize key performance elements instrumental to the training and capabilities of warfighters and intelligence operators. [2,3,4,5] 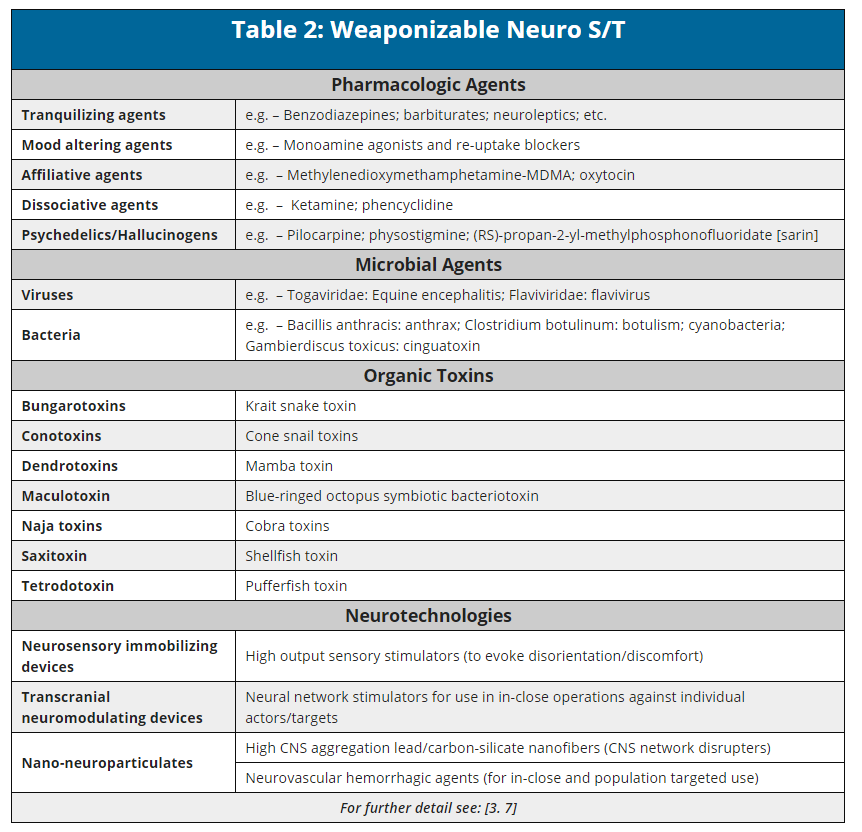 As well, neuroS/T can be weaponized to target neurological substrates and mechanisms that affect physiology, cognition, emotions and behaviors. As shown in Table 2, such “neuroweapons” include drugs to degrade physiologic and cognitive functions, and/or to alter emotional states to affect the desire or capacity for aggression and combat; organic toxins that can induce neuromuscular paralysis and death; microbial agents (e.g., bacteria and viruses, inclusive of “bio-hacked”, genetically-modified organisms) that can incur various levels of morbidity – or mortality, and a number of technologies that can be used to alter sensory, perceptual, cognitive and motoric functions. [6,7,8,9,3]

Current Conventions, Defining “Neuroweapons” and the Dilemma of Control

Obviously, research, production, and stockpiling of defined neuro-microbiologicals, and select chemicals and toxins are constrained and/or proscribed by the extant BTWC and Chemical Weapons Convention. However, other neurobiological substances (e.g., pharmaceutical formulations of neurotropic drugs, organic neurotoxins and bio-regulators) and neurotechnologies (e.g., neuromodulatory devices) developed and utilized as medical products might not, and these are readily and commercially available. [7,9]

As noted in a 2008 report of the National Research Council of the National Academies of Sciences entitled Emerging Cognitive Neuroscience and Related Technologies, products intended for the health market can be, and often are studied and developed for possible employment in military applications (e.g., to optimize or degrade aspects of human performance [10,11]). In the United States, any such activity in federally funded programs would be subject to oversight in accordance with dual-use research of concerns policies (of 2012 and 2014), reflecting the general tenor of the BTWC and CWC to date. [12]

But while such oversight and regulation constrains dual-use neuroS/T research in participatory states, it may provide opportunities for non-participatory countries and/or non-state actors to make in-roads in such enterprises to achieve a new balance of power. [13] Indeed, neuroS/T is an international endeavor, and a number of nations are engaged in dedicated programs of neuroS/T research with defense applications that may exert global strategic influence. [14] Moreover, neuroS/T research and development need not be illicit; exemptions for health and routine experimental use may foster a grey zone within which investigations for viability and employment as weapons may be undertaken.

The dedication of private and/or governmentally-supported industrial efforts to neuroS/T research and development could also enable and (at least be argued to) justify postures and protocols of diminished transparency, as commercial interests can be shielded as means to protect proprietary interests and intellectual property. Under such veils, dual-use agendas can be fostered and developed. An additional concern is that neurobiological and neurochemical substances and certain neurotechnologies can be obtained and/or developed (i.e., “bio-hacked”) with relative ease by individual non-state actors who may be supported by state-endorsed venture capital, and who may operate without regard for regulations defined by the current BTWC, thereby creating further opportunistic windows for influence.

If we define a weapon as, “a means of contending against another…to injure, defeat, or destroy,” [15] the question is not if, but to what extent the brain sciences could – and likely will – be engaged in such pursuits. Given such possibilities and probability for use, military applications of neuroS/T should not be overlooked or disregarded. Neuroweapons should not be considered for their mass destructive effect(s), but rather, should be acknowledged for their capability for amplified disruption that is executable on a variety of levels, from the individual to the political. This is particularly true of hybrid and asymmetrical engagement scenarios, in which the desired outcome is an increasing “ripple effect” resulting from a relatively small initial insult.

Furthermore, the ability to utilize neuroS/T to gain influence on the global stage is not limited to warfighting applications. The growing prominence of non-Western nations in neuroS/T research and production may afford greater leverage, if not purchase, to effect “strategic latency” (i.e., the potential to evoke significant shifts in the balance of power) by manipulating healthcare and biotechnology sales markets to affect socio-economics, and international relations. That neuroS/T can, and likely will be engaged for dual-use serves to fortify the strategic latency impact. [16]

Over the past decade, several academic papers and books, and international governmental reports have focused upon the military and dual-use potential of neuroS/T. [17,7,18,19] Initial studies, like the 2008 National Research Council report [10] and the 2014 report of the Temporary Working Group of the Organization for the Prohibition of Chemical Weapons, [20] illustrated military interest in, and potential utility of neuroS/T, but were equivocal about realizing capabilities, and/or the threat of such neuroS/T development and use by hostile groups. However, with progress in the field, the subsequent 2014 National Academies’ report Emerging and Readily Available Technologies and National Security: A Framework for Addressing Ethical, Legal and Societal Issues [21] clearly and definitively elucidated the viability and prospects of neuroS/T in international military and security scenarios. Indeed, given the pace, scope and investment(s) in the brain sciences, and the means that neuroS/T affords to “affect minds and hearts”, current capabilities – and limitations – can rightly be seen as prompts to overcoming existing challenges, and increasing future opportunities. [22,23,6]

The Need for Deep Surveillance

In light of this, I opine that there is a need for increased surveillance of international neuroS/T research and development efforts and agendas. This will require more nuanced insights to the ways that current and near-term developments in neuroS/T could be exploited in security and defense operations, and the direct and manifest effects that such use might evoke. The scientific literature can be useful to assess current trajectories of neuroS/T research developments and advancement. Profiling recent and current literature for trend analysis in neuroS/T research and development is certainly important both to gauge progress, and to gain insights to what types of current tools and techniques could be usurped into use as weapons. But pulsing the literature is not sufficient, as information dissemination may be restricted in proprietary or otherwise classified projects, and/or publication may not be an option (or necessary contingency) for those personnel who have been recruited and are employed (by states or non-state organizations) to conduct research on a strictly financial quid-pro-quo basis.

Thus, surveillance should focus upon (1) university and industrial programs and projects in neuroS/T research, development, test and evaluation that have direct, dual-use and/or viable security and/or intelligence applications; (2) the extent and direction(s) of governmental and private investment in and support of neuroS/T research and development; (3) efforts toward recruitment of researchers and scholars with specific types of knowledge and skills; (4) product and device commercialization, (5) current and near-future term military postures, and (6) current, near- and intermediate-term market space occupation and leveraging potential. While requiring more finely grained investigation and more extensive intelligence, this level and type of surveillance is of high value for empirical, analytic modeling and gaming approaches to plot realistic contexts and trajectories of neuroS/T development and use, generate outcomes’ speculation, and formulate contingency planning. [24] And, as Sonia Ben Ouagrham-Gormley (2015) recently noted, [25] appreciation for tacit knowledge of the personnel involved in international neuroS/T research and production will be crucial.

But here a caveat is warranted: the 2008 National Academies Report cautioned that surveillance-based identification of efforts to produce weaponizable neuroS/T could lead to a spiraling reaction of testing and production of countering (and/or more effective) agents. [10] These reactions will likely not be limited to incapacitating agents and devices, but will also be focused upon those techniques and technologies capable of optimizing human performance. The 2014 National Academies Report readily acknowledged the realistic possibility of escalating neuroS/T research and development (within an integrative multidisciplinary paradigm), its potential to affect international security, and the ethical, legal and social issues, questions and problems arising in and from attempts to monitor and effectively regulate both use and escalation. [21]

Indeed, as the changing perspectives of the 2008 and 2014 National Academies’ reports demonstrate, the use of neuroS/T in military and insurgency settings is no longer viewed as a proverbial “Chicken Little” (i.e., “sky is falling”) scenario of exaggerative claims and fears. [10,21] NeuroS/T has become ever more capable, and it’s interest to, and role in military and insurgency settings is now evident and increasing. [8]

The recent convening of the State Parties of the BTWC fortified that a clearer view of the ways that neuroS/T is — and can be — employed within these scenarios is important to effectively depict risks and threats. The BTWC should continue to work to revise definitions of what constitutes a bioweapon, what is weaponizable and establish grounding criteria upon which dedicated efforts to more accurately assess and analyze neuroS/T research and development can be structured.

Still, there is question as to what extent international research efforts in neuroS/T should – and realistically can – be regulated. Projective and prescriptive ethical ideals can be developed, and these can be useful in formulating guidelines and policies that are sensitive and responsive to real-world scenarios of biotechnological research and its translation. [26] But the flexibility of these approaches also means that they are not conclusive, and the relative fluidity (or diversion) of neuroS/T between healthcare and dual-use or military applications demands due diligence to evaluate any such uses within the often blurred contexts (and “fuzzy” distinctions) of public health, political and military ethics, and the reach and rigor of international treaties and law. So while it is clear that the “sky is not falling,” it remains to be seen if and how we may be best prepared for – and respond to – the possibilities that the building clouds of neuroS/T capability portend for the future.

Acknowledgements
This work was supported in part, by funding from the Lawrence Livermore National Laboratory.