Terrorists have and will continue to desire weapons of mass destruction, such as CBRNE, to further their agendas here and abroad. The use of WMDs can result in significant casualties and cause widespread panic from fear of further attacks and/or spread of disease instigated by terrorists. In response to this and other hazards to national security, the national leadership has called for a general unified, collaborative approach to deal with national level incidents, including those from CBRNE terrorism. “Our ability to effectively solve today’s problems while preparing for tomorrow’s challenges will not only require us to work together within the whole of government, but effectively collaborate beyond traditional boundaries into national and international areas of expertise in an increasingly unified and collective approach.” [1]

Homeland Security Policy Directive-5 states that “To prevent, prepare for, respond to, and recover from terrorist attacks, major disasters, and other emergencies, the United States government shall establish a single, comprehensive approach to domestic incident management.” [2] It further establishes the Secretary of Homeland Security as the principal federal official for such management. The Secretary is responsible for coordinating federal operations and administering a National Incident Management System.

Homeland Security Policy Directive-8: National Preparedness (March 2011) establishes the goal of strengthening national security through systematic preparation for the threats that pose the greatest risk, and it calls for the coordination and implementation of all-hazards preparedness. [3] HSPD 8 is supported by a Strategic National Risk Assessment that includes natural, technological/accidental and adversarial/human caused national-level incidents, which certainly involve WMDs. [4] It affirms the need for an all-threats/hazards capability-based approach to preparedness planning by establishing a scalable, flexible framework for the management structure, capabilities required, critical tasks to be accomplished and responsibilities for accomplishment.

HSPD 8 defines five preparedness mission areas—prevention, protection, mitigation, response and recovery. The National Preparedness Goal defines the 31 core capabilities required for preparedness. [5] The core capabilities are intended to embrace a wide variety of expert experiences, skills, knowledge, training, responsibilities, equipment, documentation and timeliness. The National Planning Frameworks, which are part of the National Preparedness System, set the strategy and doctrine for building, sustaining and delivering the core capabilities for each of the five preparedness mission areas. [6-11] Each framework supplies objectives and critical tasks defining the actions required to build and deliver each core capability. They describe the coordinating structures and alignment of key roles and responsibilities for the whole community and are integrated to ensure interoperability across all mission areas. Frameworks acknowledge the concept of tiered response, which emphasizes that response to incidents should be handled at the lowest capable jurisdictional level. Selective implementation allows for a scaled response, delivery of the exact resources needed and a level of coordination appropriate to each incident. 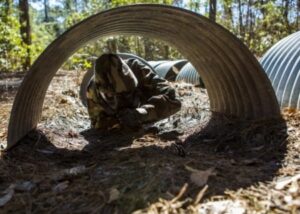 Coordinating structures bring together those entities involved in conducting activities and operations to address the requirements of the mission and serve both readiness and operational roles. Their size and membership can differ according to the mission area and hazard. They bring together those that can most effectively deal with the mission area in the context of the hazard at hand, including CBRNE. Coordinating structures ensure ongoing communication and coordination among all parties, as applicable. They facilitate problem solving, improve access to resources and foster coordination and information sharing. The flexibility of such structures helps ensure that communities across the country can organize response efforts to address a variety of risks based on their unique needs, capabilities, demographics, governing structures and non-traditional partners. Coordinating structures use different types of arrangements to achieve their objectives.

At least six different types of arrangements have been identified in a variety of areas, and the U.S. Government Accountability Office has also examined “Key Considerations for Implementing Interagency Collaborative Mechanisms,” and they are listed below: [12,13]

1. Collaboration relies on voluntary or discretionary participation among the members, who are relatively equal or at least have parity in such an activity and arrangement;

2. Coordination, in which a lead agency or officer directs an operation, project or program among one or more other agencies;

3. Mergers, by which all or parts of different agencies or their authorities, jurisdictions, personnel and resources are merged with or transferred to another organization;

4. Integration, which brings together relevant parts of agencies on either a long-term or a temporary ad hoc basis, to carry out a particular operation, project, program or policy;

5. Networks, which involves the federal government and all or several other levels of government: federal, state, local, tribal, or, in some cases, foreign countries; and

These arrangements require significant attention to ensure success. There are many reasons why they may fail or result in poor or unsatisfactory results, as noted in Figure 2. The NRF is founded upon the National Incident Management System core set of doctrines, concepts, principles, terminology and organizational processes that enable effective, efficient and collaborative incident management. Personnel and organizations that have adopted this common framework are able to work together, fostering cohesion among the various organizations involved in all aspects of an incident. [15] Multi-agency coordination and unified command are essential to effective response operations because they address the importance of: (1) developing a single objectives set; (2) using a collective, strategic approach; (3) improving information flow and coordination; (4) creating a common understanding of joint priorities and limitations; (5) ensuring that no agency’s legal authorities are compromised or neglected; and (6) optimizing the combined efforts of all participants under a single plan.

The NRF is a guide to how the Nation responds to all types of disasters and emergencies. It sets the doctrine for how the Nation builds, sustains and delivers the response core capabilities identified in the National Preparedness Goal. “Response,” as used in the NRF, includes actions to save lives, protect property and the environment, stabilize communities and meet basic human needs following an incident. The Federal Emergency Management Agency engages all levels of governments when putting the NRF into operation. The NRF describes specific authorities and best practices for managing incidents that range from serious but purely local, to large-scale terrorist attacks or catastrophic disasters, defined as any natural or manmade incident, including terrorism, that results in extraordinary levels of mass casualties, damage or disruption severely affecting the population, infrastructure, environment, economy, national morale or government functions. The following annexes provide more detailed information to assist practitioners in implementing the Framework.

Support annexes describe how all organizations coordinate and execute the common functional processes and administrative requirements necessary for efficient and effective incident management. They describe essential supporting aspects that are common to all incidents. [10]

Coordinating agencies support the Department of Homeland Security incident management mission, providing the leadership, expertise and authorities to implement critical and specific aspects of the response. Cooperating agencies are entities that have specific expertise and capabilities to assist the coordinating agency in executing incident-related tasks or processes. For example, the DoD can provide defense support of civil authorities during domestic incidents. 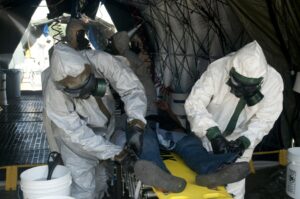 DoD plays an essential role in countering WMDs through operational capabilities that protect from the threat or actual use of WMDs. DoD is a cooperating agency for the majority of support annexes. [16] In the CBRN area, DoD forces are important for detecting, preventing, mitigating and responding to incidents requiring specially trained and equipped response forces postured for rapid deployment. DoD general purpose forces include medical, security, engineering, logistics and transportation capabilities, and command-and-control capabilities to manage the specialized and general purpose forces that will likely be needed to support civilian agencies after a CBRN incident. [17] 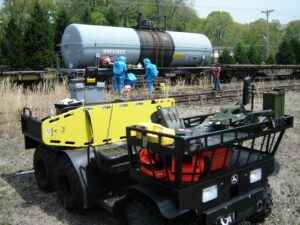 At the Chemical, Ordnance, Biological and Radiological Training Facility, the Center for Domestic Preparedness offers the only program in the nation featuring civilian training exercises in a true toxic environment, using chemical agents and biological materials. The former Noble Army Hospital has been converted to a training site (Noble Training Facility) for health and medical education in disasters, to include both acts of terrorism and natural disasters. The Advanced Responder Training Complex offers a cross-section of environments found in any community throughout the nation and provides responders with a realistic training environment. The Department of Homeland Security also has access to lessons learned and other resources, such as a documents library, information on the Homeland Security Exercise and Evaluation Program, threats/hazards, core capabilities initiatives, knowledge base, mitigation best practices, forums and collaboration channels.

The InterAgency Board for Equipment Standardization and Interoperability was founded by the DoD and the Department of Justice to emphasize interoperability, compatibility and standardization; foster a multidisciplinary perspective; facilitate effective intergovernmental partnerships; serve as a credible voice for the responder community; and share field operational experiences and practices. The IAB provides a standardized equipment list, containing a list of generic equipment recommended by the IAB to local, state and federal government organizations in preparing for and responding to all CBRNE events. [19] The IAB also provides a list of relevant priority research and development topics. [20] 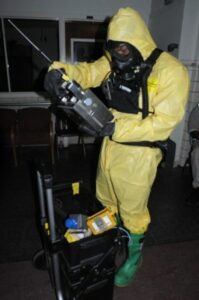 There are many different types of naturally and accidently occurring events that qualify as national level incidents. Added to these are human-caused/terrorism incidents such as CBRNE use. Recognition that these incidents all have common features that require similar actions was a key perception underlying the development of an all-hazard response system. Five mission areas defining needs common
to such hazards underpin the system: Prevention of such incidents, particularly those due to accidents and acts of terrorism; Protection of the populace from incident effects; Mitigation of such effects; Response in a quick and effective manner; and Restore the affected area. Core capabilities associated with each mission area are defined and related to critical tasks that must be performed to achieve desired results. Successful implementation of the frameworks addresses the five mission areas for many different types of national level incidents and requires collaboration among different agencies, levels of government, non-government organizations, private companies and others, with definitions of which players play what roles. Also, different scales and types of incidents may likely require different types and amounts of attention. Therefore, the frameworks were designed to be adaptable, flexible and scalable. Finally, there are organizations that deal with the resources needed for effective response, including training, equipment, exercises and lessons learned. All of these efforts represent a translation of Presidential Policy Directives to actions on the parts of organizations and individuals, enabling effective and rapid action to deal with national level incidents such as those posed by CBRNE usage. They are also key parts of the National Preparedness System, which outlines an organized process for everyone in the whole community to move forward with their preparedness activities and achieve the National Preparedness Goal: identifying and assessing risk, estimating capability requirements, building and sustaining capabilities, planning to deliver capabilities, validating capabilities and reviewing/updating. [21] 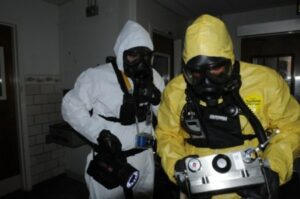 Timothy Karpetsky, Ph.D., has over 40 years hands-on experience with CBRNE materials. He has conceived, developed and produced diverse equipment for the detection, identification of, and surveillance for such materials. Over this time, he has worked for and with the U.S. government and private companies, including heading a detection innovation skunk works. Originator of 14 published patents, he has written many technical papers, including readiness assessments for manufacturing CBRNE defense equipment.