Aerosols are fine particles suspended in a gaseous medium [1,2], and aerosol technology could be used for synthesizing novel nanomaterials with independently controlled properties, tuned specifically for
a given biological application. Using engineered nanoparticles for biomedical purposes has gained popularity in the last decade due to their exceptional physicochemical properties. In the past year, aerosol technology and nanoscience combined for the rapid and non-invasive delivery of therapeutic
agents into selected bodily organs [3]. This technology may benefit military personnel
injured in combat.

Deployed personnel may wait hours before receiving decisive medical care due to logistical, manpower, and/or operational constraints. Therefore, warfighters injured in austere environments may benefit from advanced medical technologies that are easily carried and implemented in combat. For example, blasts from improvised explosive devices can cause concussion and sub-concussion in military personnel; these injuries are together known as mild traumatic brain injury (mTBI) [4].

mTBI has been referred to as the signature injury of conflicts in Iraq and Afghanistan, and active duty and reserve service members are at increased risk for sustaining mTBI compared to their civilian peers. Nearly 360,000 service members have been diagnosed with TBI, and 82 percent of those cases were mTBI-related [5,6]. Because of this, mTBI is an area of active investigation by the Department of Defense because blast-induced brain injury is different from more “typical” avenues for brain injury, such as motor vehicle accidents or falls due to the blast wave from combat munitions.

There are two main challenges to treating concussive injuries on the battlefield. One challenge is the logistics of medical care in an austere environment. Typical methods of administering medication rely on medical equipment that takes up significant space and often has a short shelf life. Another challenge is the difficulty of getting medication directly into the brain. The blood-brain barrier (BBB) shields
the brain from receiving tissue-specific drug delivery, and drug delivery methods (such as injections or swallowed pills) are not as precise or immediately effective, thus requiring doctors to perform risky, surgically-invasive techniques [7]. A drug delivery system that effectively bypasses the BBB and decreases supplies needed could reduce mortality and morbidity due to mTBI, on or off the battlefield.

Aerosolized Non-invasive Delivery to the Brain

The novel approach of non-invasive drug delivery to the brain is based on aerosol science and engineering principles that allow for the synthesis of monodisperse nanoscale particles (which can potentially be used as a therapeutic agent or drug carrier) and delivery methods that can be used to
deposit such particles in the upper regions of the nasal cavity. Aerosolized drugs administered through the nasal pathway permeate the nasal epithelium, where they can be transported to the brain through olfactory nerves [8]. The simplest and shortest path for airborne nanoparticles to reach the central nervous system is through the olfactory tract; thus, intranasal delivery could provide the fastest and potentially least invasive option to deliver therapeutic agents to target cells in the brain [3].

Recently, Washington University in St. Louis researchers investigated a proof of concept study to demonstrate that an aerosol consisting of gold  of controlled size, shape, and surface charge can be delivered to the brains of locusts. The aerosol could reach the brain within 30 minutes after the introduction of the nanoparticle aerosol without noticeable adverse changes in the electrophysiological response.

In the past, efforts were made to deliver the substances to the brain by temporarily opening the BBB junctions using either high osmolar solutions or intracerebral injections to cross the BBB [9,10]. However, such invasive approaches may result in tissue damage and uncontrolled distribution of the drug from the point of injection [10]. To improve drug delivery to the brain while minimizing tissue damage, attempts were also made through the nasal pathway. Intranasal delivery provides fast, non-invasive delivery of medication to the brain, thereby affording the ability to treat mTBI through bypassing the BBB. 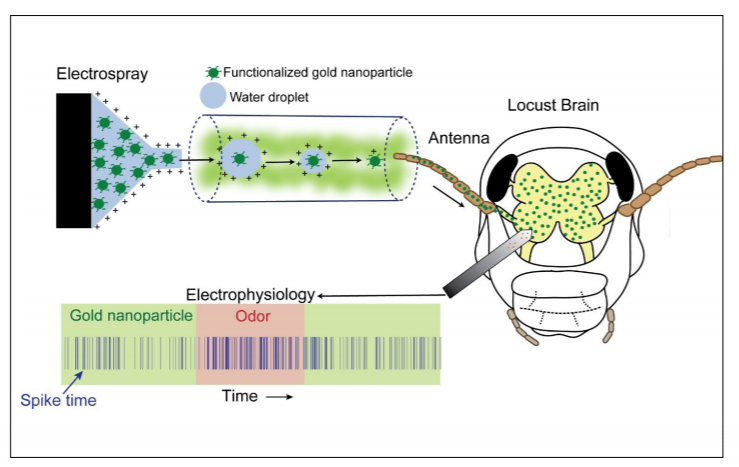 Figure 1: Schematic of an aerosol delivery of gold nanoparticles to the locust brain and monitoring the brain physiology.

Aerosol-based, non-invasive drug delivery has the potential to rapidly and effectively treat mTBI in service members injured in combat. Most drugs used to treat mTBI are given after diagnosis and are used to manage symptoms. However, if a medication that reduced the inflammatory cascade that occurs
at the onset of a concussive injury were given immediately, the severity of the injury may be reduced and recovery time minimized. Further research must be conducted regarding particle mode of entry, the efficacy of delivery, transport mechanisms, viable pharmaceutical candidates, and long-term toxicity before the method can be further tested.