A reliable communication infrastructure is crucial for an efficient and successful emergency response system. As stated in the Disaster Resilience Framework (work-in-progress) developed by the National Institute of Standards and Technology for the United States Department of Commerce; communication infrastructure in natural disasters is important for “relaying emergency and safety information to the public, coordinating recovery plans among first responders and community leaders, communication between family members and loved ones to check on each other’s safety, and communication between civilians and emergency responders.” [1] In this framework, communication is addressed as one of the seven critical facilities along with buildings, transportation, energy, water and waste water.

In addition to facilitating recovery of existing infrastructure, the on-demand communication infrastructure is valuable for temporarily setting up highspeed networks in places outside of the range of fixed infrastructures. The U.S. military needs communication and networking systems for situational awareness, especially in remote environments. Researchers say there is a gap in communications coverage in some locations where the military is operating. [4] The Defense Advanced Research Projects Agency created the “Fixed Wireless at a Distance” program to develop better military communications for warfighters deployed to remote areas without the need for fixed infrastructure. [5] 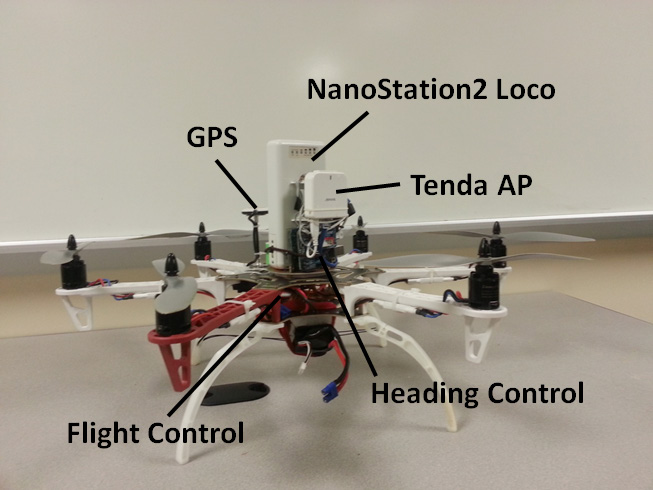 Wildfires, which often occur in rural and mountainous areas without the availability of fixed infrastructures, are a national threat to the United States. The solution of dispatching high-cost manned airplanes to collect fire condition, and planning resource allocation solutions based on data retrieved from these airplanes after they are back, is highly inefficient due to the information delay. A high bandwidth, on-demand communication infrastructure is of significant value by providing real-time fire information to increase the safety of firefighters and their effectiveness in rescue missions.

Some key challenges, ranging from technical to operational issues, need to be addressed before UAVs can be widely adopted for emergency response operations.

High mobility is one main challenge for robust airborne networking. The wireless communication channel between a pair of UAVs is very different than channels in wireless communication networks on the ground. Typical wireless commercial channels have at least one stationary terminal. For example, in the 4G cellular system, despite the movement of users’ cellphones, the base station (the other side of the channel) has no mobility. In establishing communication channels between flying UAVs, however, the uncertainty of UAV mobility introduces vastly different channel characteristics, which are not fully understood. In fact, the mobility characteristic of UAVs itself has not been systematically studied. A majority of existing research on UAV-to-UAV communication borrows mobility models from traditional mobile ad hoc networks, which have been used by the military, [5] such as random walk and random waypoint. While these simplified models provide invaluable insights into airborne networking, there is critical need to understand UAV mobility and develop mobility models dedicated to aerial networks that realistically capture the unique attributes of aerial links. [6,7] 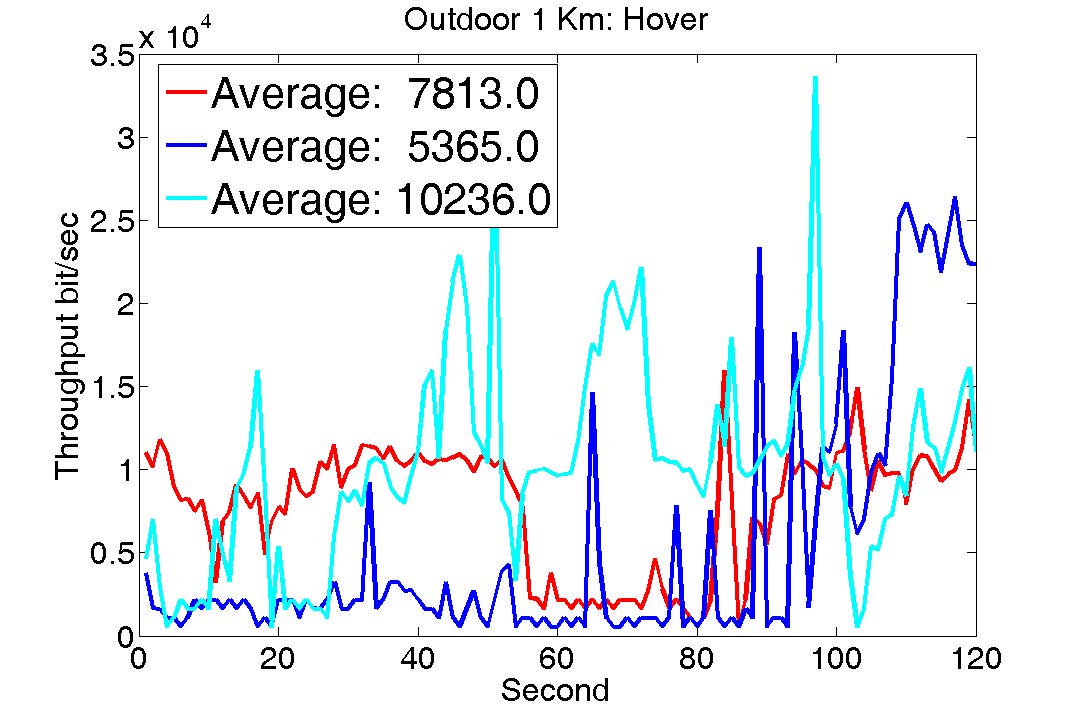 Figure 3: Throughput for the UAV-to-UAV link of 1Km. [11] (Image courtesy of Shengli Fu and Yan Wan, University of North Texas/Released)

The connectivity of an aerial link between UAVs is also affected by the non-line-of-sight effect. The quality of wireless communication relies heavily on the line-of-sight path to ensure the proper propagation of signals from the transmitter to the receiver. The non-line-of-sight effect in ground wireless communication networks is typically caused by obstacles (such as high building, trees and mountains) standing within the wireless link. The signal block for UAVs, however, is typically caused by the aircraft body blockage. [8] UAV-carried antennae are typically small and installed on one side of the aircraft. As such, wireless signals are easily blocked by the UAV body, especially when the UAV changes it gestures, e.g., during turns. One solution to resolve the effect of body blockage is to change the heading of UAVs according to their relative positions. If the position information is also transmitted through the aerial link, however, it is still difficult to maintain communication because the position information is lost once the communication link is broken due to body blockage.

Flight time is another factor that significantly holds back the use of UAVs for providing communication services. While balloons can stay long in the air (e.g., the balloon for the Google Loon project is designed for 100 days in the stratosphere), it is very challenging to have a UAV hover in the sky for a long duration. Small drones are currently mostly powered by electric batteries, and have a typical flight time of less than 30 minutes. To increase the hover time, other power sources such as fuel cell, solar, wind and hybrid energy source will be valuable. For instance, the UAV in the Facebook project powered by solar energy is expected to fly up to 90 days.

In addition to these aforementioned technical challenges, UAV applications also face non-technical issues, such as federal regulations and acceptance from the society. Under current regulations from the United States Federal Aviation Administration, academic institutions and small businesses require a very rigorous process to fly UAVs, including a request for UAV operation, certificate for the pilot and report after the flight. In addition, society is still not widely ready for UAV applications due to privacy, security and also the ownership of immediate airspace issues. [9] Convincing society of the safety and reliability of UAVs and their benefits to human lives in terms of efficiency reduced cost and job opportunities will take considerable time. Google launched Project Loon to use balloons to connect people in rural and remote areas. [10] Facebook recently announced a solar-powered UAV project to provide Internet access from an altitude range of 60,000 to 90,000 feet. [11]

To address the urgent need for on-demand emergency communication infrastructure, researchers developed a drone-carried, on-demand Wi-Fi prototype system. [12] While a number of wireless protocols can be used for aerial communication, the commercially available Wi-Fi is considered suitable for the on-demand broadband communication infrastructure using small UAVs, due to the cost, regulation and compatibility considerations. As shown in Figure 1, on page 4, the drone-carried Wi-Fi system consists of the following main components: 1) the multi-copter UAV, 2) GPS module, 3) flight control module, 4) directional antenna, 5) heading control module and 6) Wi-Fi router.

The multi-copter UAV is used to carry the Wi-Fi terminals. Compared to fixed-wing UAVs, hex-copters are easy to control, and can stay at a fixed position in the air, making them a nice platform to provide communication services. In the prototype, researchers used DJI F550 hexacopter as the carrier platform because of its high stability in strong winds. As the drone Wi-Fi system features a modular design, it can be placed on other UAV platforms, including fixed-wing flights. The GPS module and flight control module are standard for UAVs. The GPS information is not only used for flight control, but also for maintaining communication.

The other important module to enable long distance UAV-to-UAV communication is the heading control module. It uses GPS information and a compass sensor to assure the alignment of directional antennae. The precision of heading control is crucial to maintain a robust UAV-to-UAV communication link over a long distance. Control algorithms are applied to reject the disturbances introduced by UAV motion and winds. The compass sensor used in the system is E-Compass LSM303 and heading control is implemented using Arduino UNO. The researchers demonstrated their technology at the Global City Team Challenge in Washington, D.C. on June 1, 2015. (Image courtesy of Shengli Fu and Yan Wan, University of North Texas/Released)

Finally, the Wi-Fi router provides a wireless link between the UAV and ground terminals, such as smartphones, laptops and tablets, and the heading control of directional antennas. Researchers chose the Tenda A6 wireless mini AP for its compact size and low weight.

To prove the feasibility of the system and evaluate system performance, researchers conducted various indoor and outdoor flight tests. Figure 2 shows one experimental setup with two hexacopters and two laptops on the ground. The end-to-end throughput is measured by iperf, a commonly used network testing tool, which runs on both laptops. The transmission power for directional is set as 20 dBm, the maximum achievable for the selected NanoStation. As shown in Figure 3, throughputs are recorded for three flight tests of two minutes each. The average throughput for the whole system is 7.8 Mbps. The lowest performance (blue line) is caused by the impact of heavy winds during the test, which not only affect the stability of the drone, but also make the directional antenna itself drift. Despite the room for improvement, the prototype and its experimental results show the appealing potential of drone-carried Wi-Fi communication.

The drone-carried, on-demand Wi-Fi system was developed as part of the Smart Emergency Response System to participate in the SmartAmerica Challenge initiated by White House and NIST in 2014. [13] The goal of SERS is to apply cyber-physical and human-in-the-loop technologies to rescue people, save life and attend to the critical need when disaster strikes. [14,15] The SERS project also participated in the Global City Team Challenge in 2015, with the emphasis on technology maturation, system integration and onsite deployment. [16] With the collaboration from Worcester Polytechnic Institute robotics team and Austin Fire Department as part of the SERS team, researchers successfully demonstrated the deployment of flexible, cost-effective and UAV-carried on-demand communication infrastructure, and its integration with existing emergency management systems to support the missions of first responders, rescue robots, mission command and control centers. In the demonstration scenario, victims were trapped in a chemical-leaky environment. UAVs were dispatched, which provided aerial views of the terrain to the operator of remotely controlled search and rescue robot to quickly locate victims, and more importantly established the communication link in the aerial layer through which control commands to the remotely controlled robot and video captured by the robots were transmitted. The demonstration suggested the capability of the drone-carried Wi-Fi system in improving the effectiveness of search and rescue missions.

The capabilities of a drone-carried Wi-Fi communication system could be critical for future military and emergency management operations, especially in remote areas without readily available communication infrastructure. With challenges with funding continuing to concern law enforcement and emergency personnel, finding technologies that are already built and tested by the Department of Defense (DoD) creates the ability for this technology to have a much more manageable cost. Advanced technologies created for military readiness, environmental safety
and advancing the warfighter remains a top priority for the DoD. As a result, many of these technologies, including on-demand communications, have numerous crossover benefits utilized by the emergency management community, lessening the impact of disasters and saving lives.

4. Vergun, David. (2015, May 14). Nano-satellites may soon communicate with Soldiers from space. The United States Army. Retrieved from http://www.army.mil/article/148608/Nano_satellites_may_soon_communicate_with_Soldiers_from_space/ (accessed December 15, 2015). 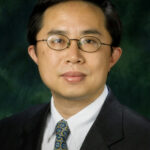 Dr. Shengli Fu is an Associate Professor and Chair of the Department of Electrical Engineering at the University of North Texas. He is the director of the Communications and Signal Processing Laboratory at UNT. Fu’s research interests include coding and information theory, wireless communication and networks and communication for aerial networks. His research has been funded by multiple NSF grants and he actively works with local industries for innovative technology development and transfer. 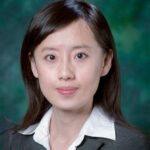 Dr. Yan Wan is an Associate Professor in the Department of Electrical Engineering at the University of North Texas and the director of the Dynamical Networks and Control Laboratory. Wan’s research interests include decentralized control, stochastic systems and large-scale networks, with applications to air traffic management, airborne networking and complex information systems. She is the recipient of the NSF Faculty Early Career Development award and Radio Technical Commission for Aeronautics William E. Jackson Award.