In order to minimize or circumvent the effects of weapons of mass destruction (WMD), as related to the loss of life and property, emergency preparedness against WMD be-comes an important countermeasure. Countering WMD is a critical element of the emergency preparedness process because it contains elements of prevention, mitigation and response. 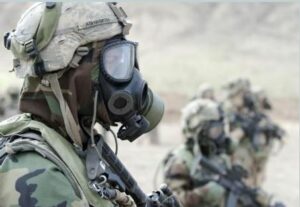 This article will highlight some of the important ongoing efforts being conducted by the Department of Defense (DoD) and Department of Energy (DOE) to counter the threats posed by WMD and how those efforts apply to emergency preparedness. First, a brief discussion on some important U.S. documents that include the requirements for ensuring the security interests of the United States by countering WMD is provided.

On December 11, 2002, then President George W. Bush issued the National Strategy to Combat Weapons of Mass Destruction. In this strategy, President Bush stated that WMD, nuclear, biological and chemical, in the possession of hostile states and terrorists, represent one of the greatest security challenges facing the United States. The President further stated that our national strategy to combat WMD is based on three pillars: (1) counterproliferation, (2) non-proliferation and (3) consequence management. Those three pillars to combat (counter) WMD (CWMD) remain in effect today.

On May 27, 2010, President Obama issued the U.S. National Security Strategy. This strategy stated that there is no greater threat to the American people than WMD, particularly the danger posed by the pursuit of nuclear weapons by violent extremists and their proliferation to additional states. The President also stated that we are pursuing new strategies to protect against biological attacks, and he specifically called for “obtaining timely and accurate insight on cur-rent and emerging risks.” 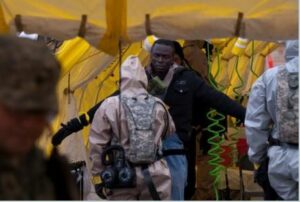 Soldiers with the New Hampshire and Massachusetts National Guard CBRNE enhanced response force packages (CERF-P) work to decontaminate personnel that have been evacuated or extricated out of a simulated collapsed structure. (Maine Army National Guard photo by Sgt. Angela Parady/Released) 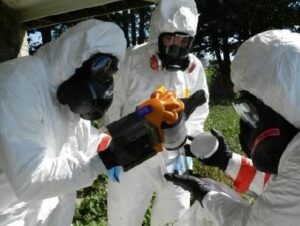 On June 28, 2011, President Barack Obama issued the National Strategy for Counter-terrorism. In this strategy, President Obama stated that nuclear terrorism is the greatest threat to global security. The President further stated that preventing terrorist development, acquisition and use of WMD is one of the eight overarching counterterrorism (CT) desired end states (goals) to achieve success in the U.S. global CT mission. 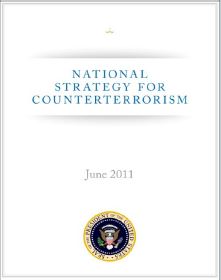 On January 5, 2012, the U.S. Defense Strategic Guidance (i.e., Sustaining U.S. Global Leadership: Priorities for 21st Century Defense) was released by then Secretary of Defense Leon Panetta. He stated that
this guidance will “preserve our ability to conduct the missions we judge most important to protecting core national interests.” One of those six missions is countering WMD.

On March 4, 2014, Secretary of Defense Chuck Hagel released the 2014 Quadrennial Defense Review (QDR). The QDR is a legisla-tively-mandated review of Department of Defense (DoD) strategy and priorities. The QDR describes how our military will prepare for the strategic challenges and opportunities that will be faced in the future (typically, the next 10 years) framed within the current con-straint of fiscal austerity.

One section of the QDR contains an assessment of the QDR by General Martin E. Dempsey, Chairman of the Joint Chiefs of Staff. He states that he and the Joint Chiefs used the prioritization of 12 identified missions to advise the Secretary of Defense and the President and determine how to distribute the force among our Combatant Commanders. CWMD is the sixth most important mission of the 12 identified missions.

Cover of the 2014 Quadrennial Defense Review (Courtesy of DoD/Released)

Information was provided on April 1, 2014 by (1) Ms. Rebecca K. C. Hersman, Deputy Assistant Secretary of Defense for Countering Weapons of Mass Destruction; (2) Ms. Anne Harrington, Deputy Administrator for Defense Nuclear Proliferation Office, National Nuclear Security Administration (NNSA), DOE; and (3) Mr. Kenneth A. Myers III, Director of Defense Threat Reduction Agency (DTRA) and Director of U.S. Strategic Command Center for Combating Weapons of Mass Destruction (SCC-WMD), during the hearing entitled “Proliferation Prevention Programs at the Department of Energy and Department of Defense.” This hearing was held before the Subcommittee on Emerging Threats and Capabilities of the Senate Armed Services Committee. The overarching focus of the hearing was framed within the Fiscal Year (FY) 2015 President’s budget request for these organizations. Three expert witnesses provided the details of the ongoing CWMD efforts, and their testimony is presented in the following paragraphs.

Ms. Harrington stated that one of the most important missions of her organization has been to support the Administration’s commitment to secure the most vulnerable nuclear material across the globe, commonly referred to as the four year effort. In particular, NNSA accomplishments since 2009 have included the following: removed or confirmed the disposition of about 3,000 kilograms of highly enriched uranium (HEU) and separated plutonium including the removal of all HEU from 11 countries and Taiwan; enhanced security of 32 buildings containing metric tons of weapon-usable material in Russia; installation of almost 1,600 radiation portal monitors at border crossings, airports and seaports; and successful removal of quantities of HEU from both Italy and Belgium. 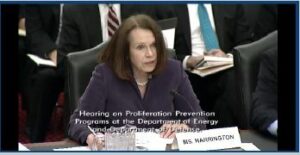 Ms. Anne Harrington, Deputy Administrator for Defense Nuclear Proliferation Office, National Nuclear Security Administration (NNSA), DOE, at the “Proliferation Prevention Programs at the Department of Energy and Department of Defense” hearing held before the Subcommittee on Emerging Threats and Capabilities of the Senate Armed Services Committee. (Courtesy of The U.S. Senate/Released)

She noted that the highlight at the third Nuclear Security Summit in the Hague in late March 2014 was the joint U.S.-Japan announcement to eliminate hundreds of kilograms of HEU and plutonium from the Japanese Atomic Energy Agency’s Fast Critical Assembly. She stated that these accomplishments have made it substantially more difficult to acquire and traffic the materials required to make an improvised nuclear device.

She also mentioned that with support from Congress her office will continue to pursue a multi-layered approach to protect and account for materials at their source; remove, down-blend or eliminate material when possible; detect, deter and reduce the risk of additional states acquiring nuclear weapons; support the development of new technologies to detect nuclear trafficking and proliferation; and verify compliance with arms control treaties.

Ms. Hersman stated that countering such complex and dynamic threats of WMD requires flexible, innovative and agile responses as well as “whole-of-department,” “whole-of-government” and even “whole-of-international-community” solutions. She noted that the international efforts to deal with Syria’s chemical weapons (CW) program, which is unprecedented in scale, speed and complexity, is a vivid example. She went on to state that because of the efforts of so many contributors and the support of Congress, Syria’s CW program is on the path to elimination. The centerpiece of the U.S. contribution, the Cape Ray (a former U.S. cargo ship), outfitted with DoD’s recently-developed Field Deployable Hydrolysis Systems and funded predominantly through the Cooperative Threat Reduction (CTR) program, is ready to neutralize the most dangerous chemicals in the Syrian arsenal and to do so in a safe, secure and environmentally sound fashion. She emphasized that this type of creative, collaborative approach to a WMD challenge cannot be the exception but must become the rule.

Another case in point cited by Ms. Hersman is the January 2014 announcement of the complete destruction of the CW munitions that Libya declared in 2011 and 2012. She cited this success as possible only through the resources and expertise coupled with cooperation from the OPCW and Libyan government with contributions from the German government. Ms. Rebecca K. C. Hersman, Deputy Assistant Secretary of De-fense for Countering Weapons of Mass Destruction, at the “Proliferation Prevention Programs at the Department of Energy and Department of Defense” hearing held before the Sub-committee on Emerging Threats and Capabilities of the Senate Armed Services Committee. (Courtesy of The U.S. Senate/Released)

She stated that even though the traditional DoD CTR Program of assistance that has operated in Russia for the last 20 years is drawing to a close, the United States and Russia have agreed to continue a number of important efforts on a collaborative basis through the Framework Agreement and Protocol on a Multilateral Nuclear Environmental Programme in the Russian Federation (MNEPR), of which NNSA is a partner. She mentioned that Russia and the United States plan to proceed through the DoD CTR program with two already planned projects: dismantling a Delta III strategic submarine and funding transportation of HEU submarine spent fuel from a less secure to a much more secure location in Russia. She believed these efforts to be priority threat reduction activities important to the U.S. national security interest. She did state that given the unfolding events in Ukraine and Crimea, her office is carefully evaluating their activities in the region to ensure full consistency with the President’s guidance.

Ms. Hersman also discussed efforts being undertaken by her office regarding the biological threat. She mentioned the Cooperative Biological Engagement Program (CBEP), which is part of the DoD CTR program, includes active engagements in Africa, South and Southeast Asia, and the Middle East to address the diverse and rap-idly changing global biological threat.

She also stated that the CBEP attempts to reduce biological threats by focusing on security, enhanced security measures and securing pathogens as well as improving our ability to survey, detect and provide better strategic warnings for biological threats. She indicated that the CBEP collaborates very closely with its many partners, including the State Department and the expertise resident in the Centers for Disease Control and Prevention (CDC). 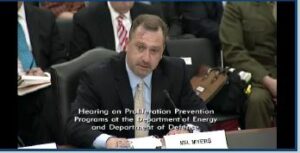 Mr. Kenneth A. Myers III, Director of Defense Threat Reduction Agency (DTRA) and Director of U.S. Strategic Command Center for Combating Weapons of Mass Destruction (SCC-WMD) at the “Proliferation Prevention Programs at the Department of Energy and Department of Defense” hearing held before the Subcommittee on Emerging Threats and Capabilities of the Senate Armed Services Committee. (Courtesy of The U.S. Senate/Released)

Mr. Myers discussed the work being done by DTRA and SCC-WMD to counter the threats posed by the proliferation and use of WMD. He highlighted three of their recent activities.

He stated that one of the best examples of the capabilities that DTRA/SCC-WMD can provide and the missions they take on is related to their work in Syria. He noted that they had the expertise to evaluate a serious threat, developed the needed technologies and provided planning support to all aspects of the operation. Now the Cape Ray stands ready to begin destruction once all the chemical materials are out of Syria.

Another critical area for DTRA/SCC-WMD is the intersection of terrorism and acquisition of WMD materials, particularly biological threats. He stated this is an emerging and evolving threat, and they are expanding their areas of cooperation to stay one step ahead.

He emphasized that DTRA/SCC-WMD work closely with the CDC, and that they often pursue global health security projects together, internationally. He noted that the CDC handles public health issues, but they are not equipped to address the security threats posed by deadly pathogens, whereas DTRA/SCC-WMD is. He mentioned that earlier this year, DTRA/SCC-WMD signed a memorandum of understanding (MOU) and a strategy for joint work with CDC. This collaboration will maximize their effective-ness related to biological threats around the world. He also men-tioned that DTRA/SCC-WMD recently completed the destruction of weaponized mustard agent in Libya. He cited that 517 mustard filled artillery rounds, eight 500-pound aerial bombs and 45 insert tubes were destroyed.

The Benjamin Franklin axiom that “an ounce of prevention is worth a pound of cure” is as true today as it was when Franklin made the quote in 1735. This axiom is especially relevant to DoD efforts focused on CWMD. The efforts being undertaken by DoD and DOE in the WMD proliferation prevention arena are critical to establishing emergency preparedness against WMD. Their continued collaborative efforts in CWMD should yield an effective “ounce of prevention.”