The battlefield effects of WMDs can be catastrophic to the warfighter, and exposure can cause significant loss of life and property. The best counter to prevent such a catastrophe is complete contamination avoidance, which is only possible with fast, reliable, low-cost early warning, preferably from a distance. Today, new capabilities that leverage government and/or commercial components through a thoughtfully integrated construct are being seen. This construct does not involve another sophisticated computerized network of pre-positioned and expensive sensors in a presumably correct matrix. Instead, the constructs use a Lean-Sensing approach, which is composed of a small Lidar plus a low-cost, quad-rotor Small Unmanned Aircraft System. These systems can geo-locate hazards from a distance in real-time using Lidar, and they can detect/identify/report the hazard via on-board camera and communications. This is all accomplished in minutes using a quad-rotor SUAS vectored directly to the suspected WMD hazard location. On-board sensing can be as simple as M-8 Paper or more sophisticated and involve the use of a JCAD, Radiac, TacBio, or IBAC. System integration of required elements can come under Force Protection Architecture when in a fixed-base or “as is” when isolated and/or deploying.

In a preliminary construct of lean-sensing operations, a small Lidar detects and geo-locates a possible CBRN hazard in real-time with collaboration from Force Protection assets. A quad-rotor SUAS is then positioned to “perch and stare” and/or “perch and sense” by autonomously moving quickly to a hazard site to hover and survey based on situational need. This is in contrast to a fixed-wing UAS, which must constantly move to stay aloft. In the simplest embodiment, the quad-rotor SUAS with attached M-8 paper can land directly in a chemical and image any chemical change using an on-board camera in daylight or with headlights at night. Imagery is then streamed in real-time from the quad-rotor SUAS back to the Force Protection Architecture or a ground station.

Over the course of this article, commercial drones that may be useful for integrated remote sensing needs will be looked at, and recent work conducted at Dugway Proving Ground, Utah, in open terrain; at Redstone Arsenal, Ala., in complex terrain; and at Ellicott City, Md., in built-up areas, will be outlined. Examples of how a simple, rugged Lidar can rapidly detect, map and track a suspected WMD hazard will be shown along with how a small quad-rotor UAS can be directly vectored to a suspected site in real-time for survey and assessment. Based on the results to date, the methods and emerging capabilities demonstrated seem to indicate an effective construct that could be ready for a series of field trials in an Advanced Technology Demonstration.

“Knowing that forewarned is forearmed.” Abraham Tucker in The Light of Nature Pursued, 1768

The capabilities of unmanned (drone) aircraft created by industry over the last decade for the U.S. military and employed everyday world-wide are without peer. Names such as Raven, Shadow, Scan Eagle, Predator and Global Hawk call to mind incredible performances under demanding conditions. Here, key performance needs are oriented along the lines of speed, altitude, range, payload and supportability, and specific operational activity, which is largely conducted from a stand-off distance in order to preserve stealth, surprise and survivability. Thus, the very nature of unmanned, fixed-wing aircraft and how they are currently employed largely precludes operations close to the target or objective. This approach has been the focus of the military for quite some time. Concurrently, elements of the commercial sector have been moving in a slightly different direction.

Recent advances in unmanned, multi-rotor commercial technologies and aircraft from the public sector (Figure 1) have created a market place where drone performance and price-point achieve world-wide sales measured in the hundreds of thousands of units. For example, world-wide Parrot sales are on the order of 350,000, Phantom sales are on the order of 150,000 and Amazon sales are nearly 20,000 per month. Users include hobbyists, realtors, news media organizations and motion picture companies. The users have all realized that commercial-off-the-shelf, multi-rotor SUAS offer a reasonably solid value proposition for performance, reliability, usability and price. Also, commercial multi-rotor drone applications are mostly for closer-in vertical take-off and landing activities. In VTOL activities, the distance to the objective is measured in feet or meters, and stealth, surprise and survivability are of less concern than in current military needs.

The U.S. military has largely dominated creation of the technologies and systems that enable stand-off, fixed-wing drone needs, and the commercial sector has dominated creation of technologies and systems for close, multi-rotor VTOL drone needs. Based on some preliminary combinations and experiments, there are exceptional possibilities for leveraging multi-rotor commercial drones into lean-sensing constructs. In these constructs, the hazards are geo-located in real-time by optical means and then visually checked and initially identified using a multi-rotor commercial drone with a sensor payload vectored to the hazard location (Figure 2). 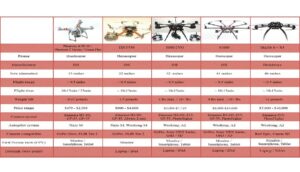 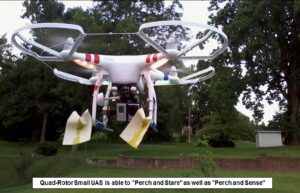 One of the techniques used to detect, map and track aerosol clouds is Lidar, and an example of a Lidar is the Standoff Detection System – Light Weight, or SDS-Lite (Figures 3 and 4). Another example is JBSDS, or Joint Biological Standoff Detection System. These are Class 1M eye-safe Lidars that operate in the infrared region (JBSDS also operates in the ultraviolet) and offer real-time eight digit latitudes and longitudes on/into/along a cloud target for a precise geo-location. The location information obtained by the Lidar can then be provided to the drone ground station for flight and mission planning. When appropriate, Lidar can be substituted with visible camera(s) or thermal camera(s), but the range and azimuth data handed off to the drone for mission planning will likely be far less exact and could result in the drone searching at the suspected hazard area. 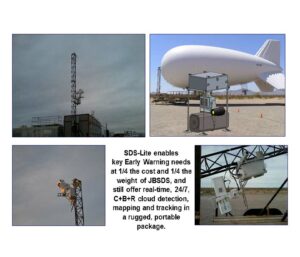 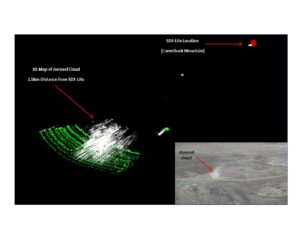 Chemical/biological/radiological sensors can be easily integrated on a commercial-off-the-shelf, multi-rotor drone, as the example in Figure 2 shows. On-board GPS and camera with optional LED headlights allow for autonomous navigation of the drone to a site where it can land, image, transmit and record first person video streaming of the attached M-8 paper undergoing detection and color change in real-time (Figure 5). 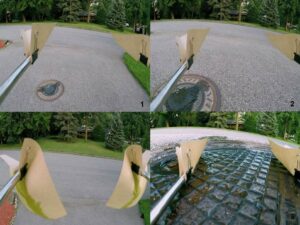 Alternatively, a more sophisticated architecture that involves a higher level of sensor integration with the drone can be employed(Figure 6). At the higher level, communications and power sharing can be hosted by the drone and data output presented as integrated information. This approach would be particularly useful if one wanted to create a more advanced CBR drone with an integrated package of chemical + biological + radiological sensors along with thermal and visible cameras. Sensor packages and cameras can also share battery power, and the battery pictured (Figure 7) is one of the best available for commercial VTOL drones. It is a smart, lithium-polymer (Li-PO) rechargeable cartridge that can provide a flight time of approximately 20 minutes. If a drone knows where it is going, 20 minutes is a significant amount of time. Additionally, the battery cartridge can be swapped as quickly as a rifle magazine. 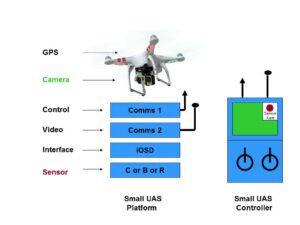 Many advanced, commercial VTOL quad-rotor drones offer an iPad-based ground station feature (for example, see “Ground Station” under iPad Applications – Bluetooth 4.0 required) that allows for precision navigation using an on-board compass, on-board inertial measurement unit and a GPS-lock of 7 to 15 satellites. The key features of the ground station are home-lock, return-to-home, fail-safe, auto-land, pre-programmed navigation and way-points navigation with real-time flight status output such as altitude, vertical speed, horizontal speed, distance-from-home, distance-to-target, battery, radio communications and satellites. These are the exact features that are needed for the aircraft component of lean-sensing, where cloud or hazard site geo-location data is provided by Lidar (or less precise cameras) and can then be transferred into a drone mission plan. For example, Figure 8 shows two operational templates for precision vectoring of a quad-rotor drone from command post to way-point(s) for single location remote sensing and route reconnaissance. These kinds of missions are easily set, programmed and flown. They are also flexible, i.e., if the drone finds something at a location that is hazardous enough that the drone should not come back, the drone mission plan can be immediately altered. 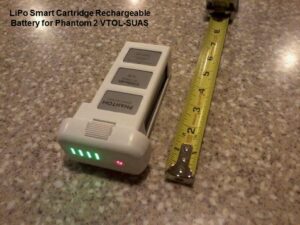 Figure 7. Battery cartridges are evolving to be more efficient and logistically supportable. (Courtesy of Science and Engineering Services/Released) 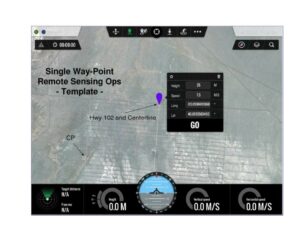 Figure 8a. Precision vectoring of quad-rotor drone from command post to way-point(s) for remote sensing and reconnaissance. (Courtesy of Dugway Proving Ground, Utah/Released) 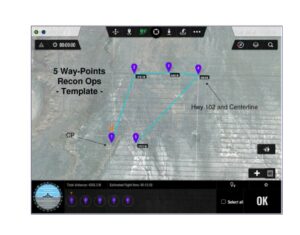 Figure 8b. Precision vectoring of quad-rotor drone from command post to way-point(s) for remote sensing and reconnaissance. (Courtesy of Dugway Proving Ground, Utah/Released)

Key aspects of the lean-sensing construct were recently tested (Figure 9). An SDS-Lite was used to detect, map and track a chemical cloud target measuring approximately 150 meters wide by 1,500 meters long. A logical geo-located point was obtained and then loaded into a quad-rotor drone mission plan. The cloud target longitude and latitude in the left of Figure 9 match way-point 2 in the right. Based on the mission plan, the total mission time for travel and sensing/imaging was about four minutes, with another optional two minutes for a return flight with sample(s) for further analysis.

Some Thoughts on the Future

Based on current technologies and systems, test results, and government and IR&D investments, the materials and preliminary methods for executing lean-sensing are now available for geo-locating hazards in real-time by optical means. The hazards can be visually checked and initially identified using a VTOL drone with sensor payload vectored to the hazard location. Aircraft and sensors can be as simple as a Phantom 2 quad-rotor drone with M-8 paper or as sophisticated as an S1000 octo-rotor drone with an integrated CBR sensor package including JCAD + IBAC or TacBio + Radiac, such as AN/UDR-13. In either case, a scenario vectoring a VTOL drone via SDS-Lite could look like the following (Figure 10):

T+4 minutes: Detection is made at the cloud or surface, and data/imagery are transmitted to command post for integration with FPA, JWARN, etc.

The lean-sensing approach offers real potential for cutting exposure risk, response time and life-cycle cost by precision unmanned delivery of a detector early in the response sequence using materials and preliminary methods now available. When lean-sensing combines with a networked decision-support system such as FPA or JWARN, the total system performance can be further enhanced. 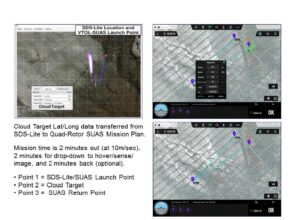 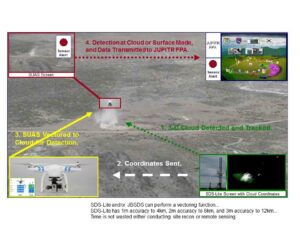 Coorg R Prasad is Vice President of R&D at Science and Engineering Services, LLC in Columbia, Md. Previously, he was an NRC senior research fellow at NASA Goddard Space Flight Center and Associate Professor of Engineering at Indian Institute of Science, Bangalore. He holds a Ph.D. in engineering from State University of New York at Stony Brook, an M.S. from Brown University, and a B.E. from Mysore University, India.

In H. Hwang is the Chief Scientist at Science and Engineering Services in Columbia, Md. He holds a Ph.D. in physics and previously worked for 10 years at the NASA Langley Research Center on various laser research. He was also the
chief designer of the Joint Biological Standoff Detection System (JBSDS) for the Joint Program Executive Office for Chemical and Biological Defense of U.S. DoD.

Robert M. Serino is Director of Operations at Science and Engineering Services in Columbia, Md. He earlier served for 20 years in the U.S. Army within the fields of operations, acquisition, intelligence, and chemical/biological/nuclear at the Pentagon, Joint Commands and U.S. Army Organizations. He holds a Ph.D. in organic chemistry from Brandeis University and a B.S. in chemistry from Loyola University. He is Level-3 Certified in Program Management from Defense Systems Management College and a licensed private pilot.