Military communication and electronic equipment needs to be sophisticated and adaptable. Researchers at North Carolina State University are working with the liquid alloys of gallium to develop shape-changing antennas, which could benefit military operations by changing shape on demand to change spectral properties, such as tuning to different frequencies. In addition, these metals can be patterned to form stretchable conductors with extremely deformable mechanical properties. Electronics that are soft and stretchable are being actively researched as a way to put electronics in new places, including clothing and on the body. In addition to forming stretchable conductors, it is also possible to 3D print the metal at room temperature, which for the first time enables co-printing of metals with plastics, elastomers and other temperature sensitive materials.

The phrase ‘liquid metal’ often evokes negative connotations. Mercury, for example, is a liquid metal well known for its toxicity. Mercury served as the inspiration for the T-1000 villain in the classic sci-fi movie, Terminator 2. There are, however, liquid metals with low-toxicity, which have interesting applications based on the element gallium. [1]

The Food and Drug Administration approved gallium for a number of applications, which is consistent with its low toxicity. Recently, droplets of liquid gallium were shown to be an effective medium to deliver cancer drugs. [2] The metal also has a very low vapor pressure, which means it will not evaporate and become airborne. Gallium is technically a solid at room temperature, with a melting point of 30 degrees Celsius. That melting point is low enough that it will readily melt when held in a human hand. Adding other metals, such as indium and tin, lower the melting point below room temperature, which ensures that it stays as a liquid. The resulting liquid has a low viscosity, similar to water.

For the purposes of this research, the most important property of gallium and gallium alloys is the formation of a very thin surface oxide layer, which allows the metal to be patterned into non-spherical shapes even though it is a liquid. [3] The oxide forms spontaneously in air and creates an extremely thin shell that helps hold the metal into useful shapes, such as wires and antennas.

Liquid metals can be patterned to create soft, stretchable and shape reconfigurable alternatives to conventional applications that utilize solid metals, including electronics, communications and optics. Examples include stretchable wires (see Figure 1), conformal antennas, 3D printed structures and soft electrodes. Liquid metal ‘wires’ embedded in elastomer overcome the traditional trade-off of composites; that is, usually
the addition of solid metals (e.g. powders) to an elastomeric composite makes the elastomer stiffer. In contrast, liquid metal can form conductive composites with elastomers that have metallic conductivity defined by the metal and elastomeric mechanical properties defined primarily by the encasing polymer. Figure 1 shows stretchable coreshell fibers (metal core, elastomeric shell) that maintain electrical conductivity to approximately 800 percent strain. [4] These fibers could be used, for example, to create stretchable antennas or as conductive, soft fibers in electronic textiles. It is possible to pattern liquid metal into useful shapes such as wires, interconnects and circuits. Unlike solid metals, liquid metal can be injected into capillaries and molded plastic parts. It can also be 3D printed, [5] which allows, for the first time, metals to be co-printed with plastics at room temperature. Although there a number of ways to 3D pattern solid metals, they usually require high temperatures to sinter metal powders using expensive equipment. These high temperatures are not compatible with plastics. As shown in Figure 2, the approach
here uses room temperature processing to directly print metal structures, which can be printed in plane or as free standing 3D structures,
stabilized by the surface oxide. 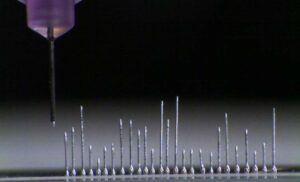 One research group at North Carolina State University recently discovered that electrochemical reactions can be utilized to manipulate the shape of alloys of liquid gallium using only a few volts. [6] The electrochemical reactions deposit a thin oxide on the surface of the metal, which lowers the interfacial tension of the metal. The oxide acts like a surfactant between the metal and the surroundings. Controlling the interfacial tension allows the shape of the metal to be manipulated at small length scales since interfacial forces dominate at small length scales. It is possible to use this phenomenon to induce the metal to fill molds and capillaries using only a few volts. Figure 3 shows some examples of controlling the shape of the metal using modest voltage. 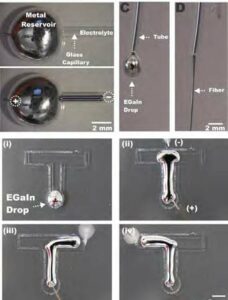 Figure 3. Top: It is possible to control the interfacial tension of the liquid metal using modest voltages, which enables shape reconfigurable metal (with permission from PNAS). Bottom: A photograph of liquid metal manipulated into the shape of a star using voltage. (Photo courtesy of Collin Eaker/Released)

The ability to get the metal to flow can be harnessed to produce shape reconfigurable antennas. [7] Antennas are typically composed of metals and derive their spectral properties from their shape. This new discovery allows for an antenna to change its shape on demand to tune the frequency and other spectral properties of the antenna.

In summary, liquid metal alloys of gallium uniquely combine metallic and fluidic properties. These properties can be harnessed to produce stretchable and soft electronics, as well as shape reconfigurable metals for reconfigurable antennas.

Michael Dickey received a BS in chemical engineering from Georgia Institute of Technology (1999) and a Ph.D. in chemical
engineering from the University of Texas at Austin (2006) under the guidance of Professor Grant Willson. From 2006-
2008 he was a post-doctoral fellow in the lab of Professor George Whitesides at Harvard University. In August 2008, he
joined the Department of Chemical & Biomolecular Engineering at North Carolina State University where he is currently
a professor. Dickey’s research interests include patterning and actuating soft materials by studying and harnessing thin
films, interfaces, and unconventional fabrication techniques.