Preparing for the Threat of Ammonia & Chlorine – HDIAC

Preparing for the Threat of Ammonia & Chlorine

Ammonia and chlorine are essential to modern life. Processes relying on ammonia and chlorine provide safe public water supplies, abundant agriculture products, and numerous other goods that enhance
quality of life for U.S. warfighters and civilians [1,2]. However, ammonia and chlorine are classified as toxic industrial chemicals (TICs) because they also pose significant health threats [3,4]. Not only are they used as chemical weapons, but they can also cause substantial harm through accidental mass releases [4]. Given their ubiquity in modern life, it is essential to prepare for chlorine and ammonia releases, whether occurring as industrial accidents or when used as chemical weapons against the
warfighter. Several federal agencies, including the Department of Homeland Security (DHS), work to prevent and prepare for such releases [5]. DHS has also sponsored research conducted by Edgewood Chemical Biological Center scientists at the U.S. Army Dugway Proving Ground that is making a substantial contribution to ammonia and chlorine event preparedness [6].

The U.S. produces more than 9 million tons of ammonia [7] and 15 million tons of chlorine each year [2]. Eighty percent of ammonia produced in the U.S. is used as fertilizer, making it essential to American agriculture. Ammonia is also common in refrigeration systems, including those that the Defense Commissary Agency is installing in military base commissaries [8]. Chlorine is used in paper, plastic, and chemical product manufacturing, as well as municipal sewage and drinking water
treatment [2].

Despite their pervasiveness, ammonia and chlorine pose substantial health hazards. When ammonia (NH3) comes into contact with human cells it reacts with cellular water to produce ammonium hydroxide (NH4OH), a highly corrosive compound [9]. Exposure through inhalation can result in nasopharyngeal burns, tracheal burns, bronchiolar and alveolar edema, and airway destruction that can ultimately cause respiratory distress or failure [1]. Skin andeye contact with ammonia can be harmful at concentrations as low as 100 ppm, with higher concentrations resulting in skin burns, permanent eye damage, and even blindness (see Figure 1). Figure 1: The effects of chlorine and ammonia on the human body

Chlorine’s toxicity is also tied to its reaction with water. Elemental chlorine (Cl2) reacts with water to produce hypochlorous and hydrochloric acids, and these acids then react to produce oxygen free radicals. This leads to both acute and chronic health effects by damaging cell walls, amino acids, and enzyme systems. Exposure can cause inflammation of upper airways, eye and skin injuries, and alveolar and endothelial cell death that can result in Acute Respiratory Distress Syndrome and pulmonary edema [2].

The Threat of Ammonia & Chlorine

Ammonia and chlorine present threats through accidental mass releases and as chemical weapons that can be used against U.S. warfighters and civilians. Chlorine has been used as a chemical weapon since World War I [3]. Salafi jihadist groups, including the Islamic State [10] and al-Qaida [11], have used chlorine gas in roadside bombs in Iraq for over a decade, including during Operation Iraqi Freedom [2]. Since 2014, the Syrian government has used chlorine as a chemical weapon in the Syrian Civil War against civilians, rebel forces, and terrorist groups [3]. Some U.S. government and military officials view ammonia as a more probable terrorist threat than chlorine due to its extensive use in industrial refrigeration [12]. In late 2016, the United Nations reported ISIS had stockpiled ammonia in Mosul
and raised concerns of possible intent to use it in chemical weapons [13,14].

Like all chemical weapons, ammonia and chlorine are attractive to terrorists because of their negative health consequences, high casualty counts, and their ability to incite mass public panic [15]. Chemicals arealso easier to access than other high-impact weapons. This is especially true for TICs because their production and use is not prohibited like other chemical weapons. The Chemical Weapons Convention (CWC), agreed to by the U.S. and 191 other countries, prohibits the development, production, acquisition, transfer, storage, and use of chemical weapons [16]. However, the CWC does not apply to legitimate industrial applications of TICs, such as ammonia and chlorine [17]. This makes it easy for TICs to be weaponized by releasing them directly from industrial facilities or during transit. In
2015, DHS reported that the risk of insider threat was increasing for the chemical sector, meaning an intentional release by an industrial employee may be more likely [5].

Additional security challenges arise for ammonia and chlorine because their production is geographically concentrated and large quantities are transported and stored around densely populated urban areas and military bases [2]. Under the right meteorological conditions, an intentional or unintentional release could envelope a large city or military base in a cloud of toxic gas [15].

Accidental mass releases are a common occurrence. In 2005, a train carrying 60 tons of liquid chlorine crashed into a parked locomotive in Graniteville, South Carolina, due to human error [4]. The crash resulted in the release of 60 tons of chlorine at a textile mill with 183 employees inside. At least 529 people sought medical treatment – leaving 72 hospitalized and nine dead. A similar incident occurred in Texas in 2004, where human error resulted in the release of 90,000 pounds of chlorine gas. The exposures left two dead and 41 injured, including six injured first responders [18]. In 2002, nearly 17,000 pounds of chlorine gas were released from a railroad car in Missouri when an automatic shut-off valve and emergency shut-off system failed. The incident injured 67 people, but no deaths were reported [18].

In the occurrence of a domestic mass release, local, state, and federal governments may be involved in response efforts. Federal response to domestic releases is typically led by DHS with support from the Department of Defense (DoD), in accordance with the National Response Framework and
National Incident Management System guidelines. Initial response requires first responders to enter a “hot zone” with the highest potential for hazardous exposure [19].

When responders enter an area with an undetermined chemical threat that could be chlorine or ammonia, Level A personal protective equipment (PPE) is necessary. This level of protection includes an Encapsulating Chemical Protective suit with a full-face-piece CBRN self-contained breathing apparatus with a positive pressure ventilation system. Level A protection also requires responders to wear coveralls, long underwear, and a hard hat under their protective suit, with chemical resistant gloves and boots [20,21].

This cumbersome PPE shields responders from the hazards of chlorine and ammonia exposures. However, Level A protection, and even lesser levels of protection, restrict movement, vision, and communication, and can induce both psychological and heat stress. This limits safe use of Level A PPE
to only 30 minutes [22].

It also requires responders to have a great deal of skill, training, and experience to operate effectively while wearing proper PPE. Responders can safely use less cumbersome protective equipment with more information about potential exposures [20,21].

An initial assessment of the nature of the release, damage and injury reports, weather conditions, geography, terrain and public reaction can better inform response efforts. A thorough assessment can also help prepare for the possibility of a secondary incident/device used after an intentional mass
release that could result in further damage and harm first responders [19].

Federal agencies, including the Centers for Disease Control and Prevention [23], Department of Transportation [24], and DHS [5], work to prevent intentional releases and mitigate effects of accidental releases of hazardous materials, including ammonia and chlorine. Specifically, DHS oversees the chemical sector as one of 16 total critical infrastructure sectors and collaborates with the private sector to ensure security of chemical products to prevent use by nefarious actors [5]. Through the Federal
Emergency Management Agency’s Emergency Management Institute, DHS trains emergency management professionals, “to prepare for, protect against, respond to, recover from, and mitigate the potential effects of all types of disasters and emergencies on the American people” [25]. DHS has
also prioritized research that will improve understanding of toxicological and dispersion data of dense gases to better comprehend certain chemicals’ hazards [5].

In response to Congressional concerns regarding TICs, the DHS Transportation Security Administration collaborated with the Chemical Security Analysis Center to conduct Project Jack Rabbit (PJR) by Edgewood Chemical Biological Center scientists at the U.S. Army Dugway Proving Ground in 2010 [6]. The goal of PJR was to further the understanding of chlorine and anhydrous ammonia behavior during rapid, large-scale release events from railcars [26]. Before PJR, the only understanding of gas behavior during a large release was developed from tests using gases other than chlorine and ammonia.

The tests examined releases of 60 to 90 tons of compressed liquefied chlorine and ammonia gases [6]. In each of 10 experiments, researchers released 1 to 2 tons of pressurized, liquefied chlorine or ammonia for 30 seconds from a downward-facing pipe two meters above ground. Tanks were custom designed and constructed for the experiment releases. Two 1,000-gallon propane tanks were used for ammonia releases, and two 500-gallon propane tanks were used for chlorine. Manual knife gate valves and remotely controlled ball valves were used for these releases.

The release site was a 2-meter-deep depression with a 25-meter radius. Measurements were taken within 500 meters from the release site. Data were collected using several types of instrumentation,
including chemical, meteorological, and photonic means of measurement, shown in Table 1. A major project finding was the effects of wind conditions on gas dispersal and indicated extremely hazardous zones for victims and emergency responders within 250 meters of the release point [6]. Chlorine
vapor remains close to the ground for 250 meters from the point of release, after which it mixes with air and reduces concentration levels. The vapor will be mixed enough to be carried away by wind after 500 meters. The findings of PJR led to a second iteration of the project. 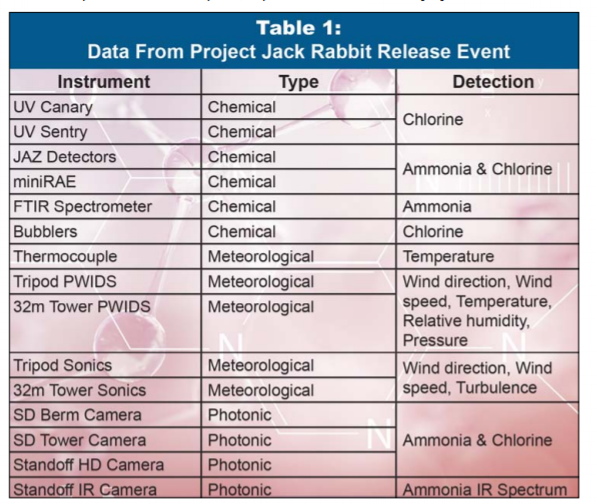 Table 1: Data collected from Project Jackrabbit that was initiated from the collaboration of the DHS Transporation Security Administration and the Chemical Security Analysis Center. Adapted from [26].

Project Jack Rabbit II (PJR II), which began in 2013 [6], tested larger scaled chlorine releases, between five and 10 tons, from a six-inch tank opening in 50 seconds or less to produce a “worst-case release
scenario.” PJR II tests were conducted in simulated urban environments, including building simulations; detection devices in and outside of vehicles downwind from releases; and additional upwind monitoring. Results revealed that chlorine vapor clouds remain within the urban environment for up to 20 minutes; liquid from releases can pool over concrete pads; vapor moves over one-story structures, but not higher structures; release concentrations take as long as 20 minutes to dissipate; and sheltering in vehicles does not reduce exposure within 200 meters of the release point. More in-depth details are not available for public release [23].

Tests in phase two of PJR II increased chlorine amounts from 10 to 20 tons. Tests were
conducted among vehicle and simulated structures to further improve urban environment modeling, understand reactivity of chlorine within the urban environment, and  improve emergency response preparedness and hazard mitigation capabilities [6]. Data gathered from the project is being evaluated in 2017 [24]

Results from these projects have provided valuable data that has been used to enhance preparedness and response to ammonia and chlorine release, including better protection of emergency responders and warfighters. Emergency response and preparedness professionals have applied PJR findings to their strategies [6]. Data from PJR has also been used to enhance the Naval Surface Warfare Center, Dahlgren Division’s RAILCAR4 Toxic Industrial Chemical Source Characterization Program [25]. Results from phase two of PJR II are expected to further enhance its contribution to protecting U.S. warfighters,
emergency professionals, and civilians.

Each year, the U.S. produces a combined 24 million tons of ammonia and chlorine [2,7]. The threat of accidental mass release, along with insider threat and terrorist actions, drives ongoing efforts by several federal agencies and the DoD. These endeavors, along with further research, are paramount to protecting U.S. warfighters and civilians from the threats posed by ammonia and chlorine.

15. National Research Council, Division on Engineering and Physical Sciences, Committee on Science and Technology for Countering Terrorism. (2002). Toxic chemicals and explosive materials. In Making the nation safer: The role of science and technology in countering terrorism (pp. 107-112).
Washington, D.C.: The National Academies Press.