Dogs are a deployable and mobile sensor that can be used in a wide variety of environmental conditions and operational settings, humanitarian assistance, stability operations, natural disasters, and other emergency response needs by conventional forces and Special Operations. The DoD’s use of dogs is perhaps best known as explosive-sniffing canines deployed to detect improvised explosive devices buried in the field [1]. However, utilizing dogs in other roles, such as for mobile real-time detection of biological targets, would benefit the DoD in a variety of other missions, including CBRNE detection, industrial chemicals, pollution, and illicit substances, as well as acting as a medical sensor for human and animal diseases. This article highlights the use of dogs in operational environments.

Pathogen infection by natural disease outbreak is the leading cause of death worldwide in plants, animals, and humans. In addition, bioterrorism is a serious threat to world populations and food sources. Scientists have been investigating technologies that aid in early detection of pathogens to prevent the spread of natural disease outbreak and bioterrorism activities. Recent advancements in analytical chemistry demonstrate that pathogen infections produce unique volatile organic profiles or odors.

Production of cellular volatile organic compounds occurs in millions of cells simultaneously, thus releasing extracellular VOC on a detectable scale. These VOC enter the blood stream and release into the air around a human, animal, or plant. The mechanism of the release is through breath, urine, feces, skin emanations, and blood [2]. The VOC profile of an individual reflects their health status and provides a sample to use for diagnostic purposes. 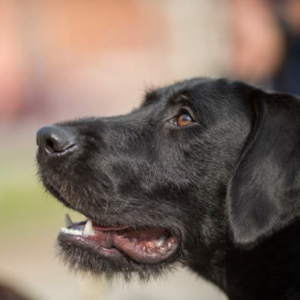 Auburn University’s Canine Performance Sciences Program is training dogs such as this one to detect explosives, narcotics,  and other targets of interest. (Released)

Dogs possess five essential qualities for biological detection in operational environments:  (1) extreme analytical sensitivity in the parts per trillion range; (2) real-time discrimination of complex odor profiles; (3) ability to trace an odor to its source; (4) the ability to efficiently search large areas and populations for a biological target; and (5) the ability to sample in environmental extremes, including high particulate densities in the air.

Dogs possess 220-300 million sensory receptors which allow them a lower limit of detection at concentrations of one part per trillion [3].  A sensitivity of one part per trillion is three orders of magnitude more sensitive than today’s available instruments. In addition, the dog has tremendous mobility and capabilities to efficiently search large areas and trace odor to its source. This capability could increase an operational team’s ability to quickly find biological targets in crops, livestock, and human populations.

Operationally, dogs should be considered a supportive technology to other sensory platforms and instruments, where dogs are used in a queuing process, enabling initial detection of target substances, or when scanning of large numbers of humans, animals, or inanimate objects is necessary.

Strategically, the dogs would be used in conjunction with existing or future developed electronic devices that may be mandated by regulation, or used as stand-alone real-time mobile sensors, where detection limits exceed the sensitivity of current technology or the stand-off distances prohibit the use of currently available detection technology. Researchers at Auburn University are currently working to develop the strategies and techniques of using dogs in combination with existing detection equipment, labeling the process, “Dog Assisted Detection.”

A current hurdle in the use of dogs to detect highly virulent pathogens is the manufacturing of safe training aids. Dogs need to train on pathogen-associated odors, which means that these odors need to be safely trapped and released for training purposes. Such a technology would be especially important for highly contagious pathogens capable of infecting humans and dogs. For other pathogens, cell cultures and other methodologies could be utilized.

Another study demonstrated the overall sensitivity of canine scent detection of lung cancer and breast cancer utilizing exhaled breath samples was 99 percent, with a specificity of 99 percent for lung cancer and 88 percent and specificity was 98 percent for breast cancer [5].  A dog was trained to detect C. difficile with high diagnostic sensitivity and specificity in stool samples and hospitalized patients, correctly identifying 25 of the 30 C. difficile cases and 265 of 270 control cases [6].

A recent study demonstrated that dogs could detect bovine viral diarrhea virus and discriminate it from bovine herpes virus 1 and bovine parainfluenza virus 3 [7].  The diagnostic sensitivity and specificity in that study was 85 percent and 96 percent and 98 percent and 99 percent, for each of the two dogs, respectively. The above studies illustrate that dogs have the sensory capability to detect pathogens in real-time. Future research needs to evaluate whether dogs can detect pathogen-associated VOC in operational environments just like they have done for decades in explosives, narcotics, human tracking, search and rescue, arson, and other targets of interest. If dogs can prove to be real-time mobile pathogen sensors in operational environments, then there are many force-multiplier roles they can play for a variety of operational missions.

Craig Angle, Ph.D. is currently the co-director of the Auburn University Canine Performance Sciences Program. Dr. Angle received a double master’s degree in biomechanics and exercise physiology and a Ph.D. in biomechanics from Auburn University. He has authored several publications and has been issued two patents. He has been an investigator on more than 35 funded studies totaling over 11.5 million dollars in research funding. He has conducted research for a variety of state, federal and international agencies. His expertise and research interest are in creating novel applications of detection dogs to detect targets of interest and to increase the overall performance of the working dog.

Paul Waggoner, Ph.D., is an experimental psychologist/behavior analyst. He is the co-director of the Auburn University Canine Performance Sciences Program. Dr. Waggoner has 25 years of experience performing laboratory studies of canine olfaction and field research of applied canine detection capabilities and technology development. He is a co-inventor of Auburn’s patented Vapor Wake®detector dog technology. He is a member of the Sub-committee on Dogs and Sensors of the National Institutes of Standards and Technology Organization of Scientific Area Committees and has an active secret security clearance.

Thomas Passler, DVM, Ph.D., DACVIM is an associate professor in the Department of Clinical Sciences at Auburn University. His work focuses on infectious diseases of livestock, especially on improving methods of detection and prevention of viral pathogens important to animal agriculture.

Dr. Robert A. Norton is a professor at Auburn University. He was educated at Southern Illinois University, where he received his B.S. and M.S. and the University of Arkansas, where he received his Ph.D. Dr. Norton currently serves as Coordinator of National Security Initiatives in the Auburn University Open Source Intelligence Laboratory and Program Director of The Futures Laboratory. A long-time consultant to multiple federal agencies and the Department of Defense, Dr. Norton’s research interests include chemical and biological weapons defense, medical and technical intelligence, military related science and technology, biosecurity and veterinary infectious diseases.