There are many ways to design a powered exoskeleton that assists the warfighter. Design types range from systems focused on increasing physical strength and preventing injury to the wearer (e.g., University of California, Berkeley’s Human Universal Load Carrier, Raytheon’s XOS 2, and Defense Advanced Research Projects Agency [DARPA]/United States Special Operations Command’s Tactical Assault Light Operator’s Suit [TALOS]) to reducing metabolic costs (e.g., DARPA’s Warrior Web program [see Figure 1], which has led to development of the Ekso Bionics™ lower-leg exosuit and the SRI Robotics SuperFlex™ soft biofidelic actuated exosuit). Current exoskeletons remain large and cumbersome to use, require multiple actuators, and are difficult to power and control. The use of passive military exoskeletons, which do not have actuators, batteries, or electronics, is also an option (e.g., the 20 Knots Plus Ltd. MARINE MOJO™ exoskeleton and the Defense Science and Technology Group of Australia Operational Exoskeleton). Both powered and passive exoskeleton technologies may be considered biomechanical assist systems, and  they are designed to improve or modify the organic human characteristics of the warfighter. The goal of most of these programs is to lighten the warfighter’s burden by enhancing extant human capabilities [1]. However, little attention has been paid to the potential role an exoskeleton could play in enhancing access to mission-critical equipment while under duress. Warfighters are encumbered by bulky vests, bandoliers, and belts, which reduce mobility and make it more difficult to remain stable while in motion.

Traditionally, most of the load carried by the warfighter is concentrated in the rucksack, while the remaining load (e.g., ammo clips and body armor) is distributed within and around the tactical vest. Loads carried by the warfighter are ever-increasing in weight [2], and exoskeleton-related innovations are attempting to reduce the impact of this load—with mixed results. Acceptance of these exoskeletons has been inhibited by the weight and complexity of the systems, as well as by the discomfort experienced at areas that directly interface with the body.

Biodesigns’ MOtion-capturing Fast-access Osseostabilizing™ (MOFO™) limb exoskeleton (see Figure 2) is specifically designed to redistribute mission-critical equipment to the warfighter’s extremities in order to enhance ease of access. Furthermore, this technology provides a more stable platform for mounted mission-critical equipment than other exoskeleton designs, enabling the operator to sprint, crawl,
jump, and crouch without restriction while retaining immediate access to a weapon, ammunition, tactical display, or other equipment. It can be worn as an individual piece on the lower leg, thigh, forearm, or upper arm—or in any combination. It is modular and adjustable and can be custom-made
or purchased off-the-shelf, depending on the level of stability needed and logistical and/or mission requirements. It is designed for easy set up and breakdown. 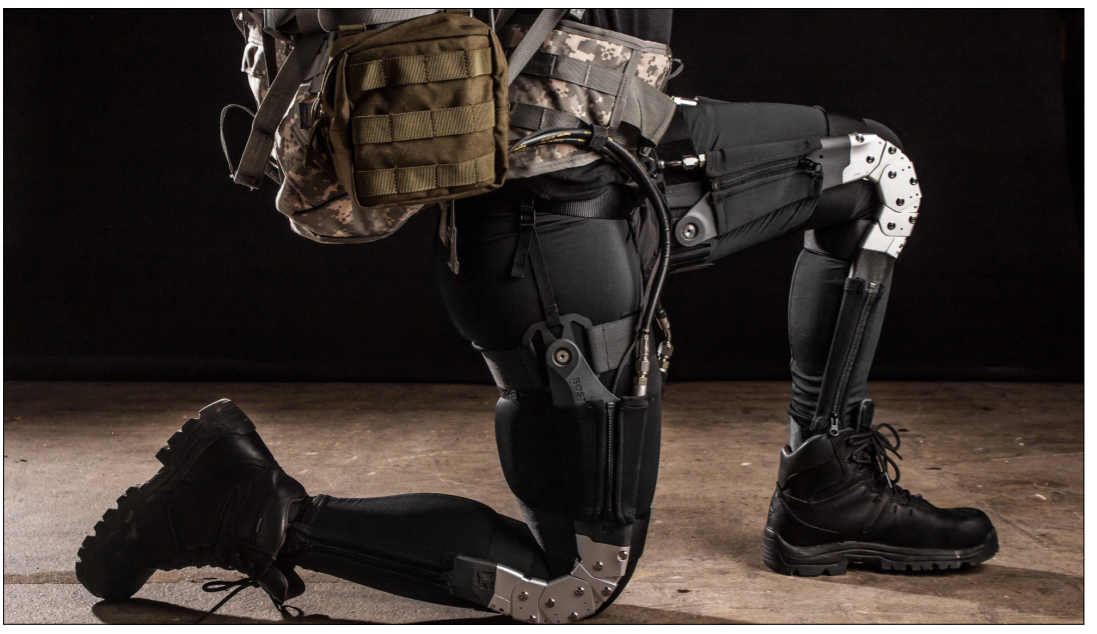 This design mirrors a patented and patents-pending method of alternating tissue compression and release borrowed from the prosthetics industry that mitigates motion of the underlying bones of the target limb in relation to the prosthetic socket to achieve full integration between the individual and
the prosthesis [3]. By taking advantage of this technology and applying it to the arm or leg of the warfighter, this limb exoskeleton provides a higher level of connection to the wearer. Because skeletal motion is accurately captured and controlled, the system becomes more integrated with the operator
than a cuff or strap system.

Strap and cuff systems are inherently unstable and unwieldy when used with an object of significant mass. For this reason, operators are typically reluctant to mount equipment on the arms and legs. However, for the same reason, our own arms and legs do not impart a feeling of excessive weight or instability. A stable platform mounted on a limb that moves in unison with it, and does not allow for unwanted rotation or translation, greatly reduces perceived weight. Figure 2: The full arm interface of the MOFO™ exoskeleton

Another benefit of a limb exoskeleton is in the redistribution of some of the weight normally loaded into a rucksack, which have long served as the warfighter’s primary load carrying equipment (LCE). Typically, all the weight carried in a rucksack is carried by the torso and hips (straps load up the trapezius muscles near the shoulders while the belt is supported by the hips). Despite the emergence of ergonomically-improved designs, there are inherent limitations to what can be safely carried, for how long, at what speed, and under what conditions. The MOFO™ can distribute some of this weight onto the limbs.By using this platform and adhering to the principles of biomechanics to maintain appropriate distances between payloads and the body’s core, spinal and other injuries of the hips, knees, ankles,
and feet caused by overloaded LCEs can be reduced.

Additionally, the stable limb exoskeleton can also provide a more comfortable, responsive, and proprioceptive attachment interface for full body exoskeletons still under development. A more stable interface between the operator and the exoskeleton will improve operator acceptance, mitigate injury,
enhance motion capture, and reduce energy expenditure. As the intimacy of the fit is enhanced, perceived weight of the system is reduced, proprioceptive feedback is increased, and a faster response to human input is achieved.

It is increasingly important to have better, less restrictive/cumbersome solutions to enhance warfighter performance, especially when many of the conflicts involve asymmetric or irregular warfare. While the
development of heavy exoskeletons is continuing at a rapid pace and systems such
as TALOS approach completion, their expense and complexity will narrow their potential scope of operation and deployment. However, load carrying, load distribution, and immediate access on the battlefield for every warfighter is of paramount concern. Reimagining and redefining the role of the
exoskeleton is an area in need of additional research. Exoskeletons provide a versatile, effective force-multiplying solution for special operations forces, traditional warfighters, and first responders.