This work highlights the fundamental mechanisms and historical perspective for military PV technology applications and addresses the operational considerations for effectively deploying PV technology. PV materials, structures and architectures have matured into competitive and readily available energy technologies based on their levelized cost of energy (LCOE). However, enhancing warfighting capabilities requires attention to systems considerations beyond cost per watt or LCOE. While PV is impractical for fighters and bombers as it can meet less than 1% of their power requirements, there are numerous areas that could benefit from the application of PV technology. For example, installing PV arrays on all DoD land could meet the electrical energy requirement of the United States and two other industrialized nations.

The DoD develops, maintains and relies on energy systems to accomplish every mission in CONUS and abroad. All energy systems contain vulnerabilities which both state and non-state actors can attack. Any degradation to energy access across all DoD operational domains undermines to the ability of the United States to protect its allies and interests across the globe.

PV technologies have the potential to improve capabilities via enhanced resilience and longevity of DoD energy systems while reducing capital, operating, and maintenance costs. Effectively integrating PV technology into current DoD energy systems has the potential to improve energy independence, redundancy, and assurance. However, PV technology has its own unique limitations and is not a singular solution to DoD energy needs. However, in certain applications PVs outclass current energy technologies, and continued research, development, and testing will enhance warfighter capabilities [1].

When the United States entered into war in Afghanistan (2001) and in Iraq (2003), with the exception of space operations, photovoltaic technologies had not yet matured. Improvements to set-up time, logistics, power to weight ratio, and dependability have furthered the capabilities and opportunities for military PV applications. PV systems are not suited for all power applications, but excel in several. Operations involving remote, low and intermittent power applications are where solar PV technologies are now able to outperform other energy technologies.

Solar PV systems generate power for end users by converting sunlight into electricity. A basic solar power system consists of PV modules connected with an energy conversion system to provide power to be utilized immediately or stored for use at a later time. Figure 1 depicts a basic PV system and some of the technologies they power.

PV cells encompass a broad category of materials which convert sunlight to electrical energy. These PV cells are grouped together into modules, also known as panels, to achieve the level of power output desired. Solar PV panels can be manufactured from a variety of technologies, as shown in Figure 2.

The most common metric for evaluating PV performance is efficiency, which correlates to the amount of power (Watts) a panel can produce from a fixed amount of incident sunlight. Efficiencies are measured under industry standard test conditions (STC) using an AM1.5 spectrum at 1000 W/m2 at a cell temperature of 25 degrees Celsius, which allows for PV cell and module performance to be easily compared. The theoretical maximum efficiency of a single-junction PV cell is approximately 30% [2]. Multi-junction solar PV cells, which stack multiple layers of PV materials on top of each other to absorb a greater range of wavelengths, possess a theoretical maximum efficiency greater than 60% [3].

Laboratory performance under STC does not always reflect performance in real world conditions, and common analyses of solar PV modules are often based solely on efficiency and cost/watt under STC. Additional considerations must be accounted for in real-world operation as environmental factors including weather, humidity, average solar irradiation, soiling, salinity, and temperature. Each consideration impacts a PV module’s performance and longevity differently.

The first silicon photovoltaic cell was reported by Bell Labs in 1941 with an efficiency of less than 1% [4]. Subsequently, the commercial semiconductor industry, supported by NASA and the U.S. Air Force, developed PVs as a means of powering satellites. The first U.S.-developed single-junction silicon solar PV array in space had an efficiency of 10% and was launched aboard the Vanguard I on March 17, 1958 [5]. In 1977 the U.S. Department of Energy (DOE) was established, bringing together dozens of organizational entities, and since then, the DOE is credited with 30% of patents in the solar energy field. DOE’s Solar Technologies Office (SETO) has directly funded more than half of all solar efficiency records [1]. Today, under laboratory conditions, state of the art single-junction silicon PV cells now exceed 27% efficiency and top performing multi-junction solar PV cells have reached efficiencies of nearly 39% [6].

The performance and cost per watt of terrestrial solar technologies have improved significantly and broadened the range of applications for PVs. These improvements are depicted in Figure 3, which shows solar PV module efficiencies between 1993 and 2019, measured under STC.

The efficiency, reliability, and ease of application of PV systems as a whole, not just PV cells, have dramatically improved in recent years. PV systems have evolved from engineering problems with significant deployment challenges into simple and dependable plug-and-play solutions. The enhancement of PV reliability, stability, and longevity have allowed PV to compete with, and even surpass, established energy technologies in many applications. According to Lazard’s levelized cost of energy analysis, in some cases it is more cost effective to build and operate new PV projects than operate existing conventional power generation plants [7].

Solar PV technologies are not suitable for certain applications, such as fighters/bombers, airlift, and ground combat vehicles that require high power, including rapid acceleration. For example, even if the wings of an F-22A or Boeing 747 were completely covered with the highest efficiency solar PV cells to date (38.8% [17]), and these cells were producing at full power, they would meet less than 1% of the aircraft’s power requirements. These calculations were performed using the thrust required to maintain an airspeed of 265 m/s at 20,000 ft altitude. In such applications, PV cells will never be a viable energy alternative. However, in many other applications solar PV technologies offer opportunities to reduce costs and improve operational effectiveness.

Ground bases can be classified as fixed installations or contingency bases. Fixed DoD installations are permanent and most rely primarily on the U.S. electrical grid, one of the largest and most complex man-made energy systems in existence, which remains highly vulnerable to threats from natural disasters, physical attacks and cyber-attacks [18] [19]. PV systems can enhance the energy resilience of fixed installations while reducing long-term energy costs. The Nellis I and Nellis II arrays shown in Figure 4 are industrial sized arrays operating at Nellis AFB, Nevada. When combined they form the largest solar PV array in the DoD.

The Nellis arrays were built on excess DoD land. The DoD owns, leases, or otherwise possesses 26.1 million acres of land [20]. If all of the land the DoD possesses were to be utilized for solar PV arrays, this would equate to 6.4 million GWh/yr of generation; 99.7% of the yearly electrical power consumption of the United States, India, and Russia combined. The calculation was performed using an average value of 4.1 acres/GWh/yr for industrial-scale PV arrays [26].

PV arrays are not the only method to utilize excess land – another example is that in 2018, the U.S. Army and Hawaiian Electric Company (HECO) completed the 50 MW biofuel Schofield Generating Station without cost to U.S. taxpayers [21]. The Army provided a 30-year lease of unused land on Schofield Barracks allowing HECO to build and operate the power plant. In the event of a grid outage or natural disaster, HECO will give priority to military energy needs. The result is a secure and cost-effective method of procuring power for DoD fixed installations and the surrounding community. It also allows for grid stabilization and improved integration of renewable resources.

Military contingency bases are often located in austere and/or hostile locations. Remote installations and equipment rely on fuel supply chains which can be cut or degraded and cause significant risk to mission capability. Single-factor dependency on energy requirements pose major risks for all DoD ground bases, and PV technologies have historically demonstrated the ability to improve base load resiliency, redundancy, and offset energy costs. One example of a contingency base PV system is the AISPCA Lightweight Solar Array, which has been demonstrated and is shown in Figure 5.

Improvements to the weight and durability of PV modules will improve the range of applications and functionality for military applications. Figure 6 shows a commercial PV module whose performance is only slightly degraded after being perforated by small arms fire. These modules are also optimized for logistics, and utilize a honeycomb design to decrease their weight by 70 to 80% when compared to a conventional glass-covered panel. 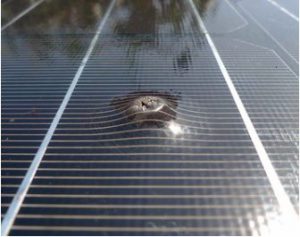 In certain applications, PV systems provide additional capabilities over competing energy technologies. The Zephyr High Altitude Pseudo-Satellite (HAPS) is shown in Figure 7. It is a viable candidate for PV due to its relatively low power requirement and large wing area. The Zephyr can carry intelligence gathering and communications payloads; operating over 100 days without have to land or refuel [10].

Zephyr HAPS meets the capabilities of many satellite systems at a fraction of the cost to build and deploy. The Zephyr operates above 60,000 ft, above most weather disturbances and air traffic. Replacing one conventional UAV with a Zephyr would save 2,000 tons of fuel each year [10].

Individual warfighter equipment is a broad category with examples including communications equipment optics, lighting and sensors. One PV example in this category is the Solar Portable Alternative Communications Energy System (SPACES), a PV-powered 124W communications suite shown in Figure 8.

Additionally, PV systems can be used for perimeter and airfield lighting, with an example shown in Figure 9. These systems require no refueling reducing operational risk and personnel workload.

One emerging PV technology involves cheap, flexible, thin-film materials which can be used to power individual warfighter equipment. The potential applications of these devices include but are not limited to heart rate monitors, optical devices, communications equipment, and more. Flexible and wearable PV technologies would be suitable for cheap, mass produced, disposable PV power systems.

Space is a tremendously hostile environment – extreme temperature fluctuations, volatile electromagnetic radiation, vacuum pressure and zero gravity. Such an environment requires robust, dependable, PV systems with long lifetimes. The DoD’s satellite network contains numerous PV-powered satellites that provide GPS, weather, communications, and intelligence capabilities. A PV example in this category is shown in Figure 10; the Roll Out Solar Array (ROSA) is the largest solar array currently being commercialized for the next generation of GEO spacecraft [16] [23].

PVs have already demonstrated their capabilities for space operations and will continue to play a vital role in satellite systems. Ongoing research is also exploring opportunities for large PV arrays in orbit to provide terrestrial energy or power UAVs via wireless transmission [24] [25].

Significant improvements in PV cost and performance increases the number of DoD applications where PV technology is suitable, including ground bases, vehicles, individual warfighter equipment, and satellites. This work provides a survey of fielded technologies, and highlights the operational considerations for effectively deploying PV modules in a variety of DoD applications, and gives examples of currently fielded PV-powered systems. PV technology has the potential to increase DoD capability, improve resilience and cut costs, and the DoD can play a key role in the research, development, demonstration and utilization of PV in a variety of mission areas.