Much can be learned from past history. Therefore, this article will study the elements comprising the U.S. Homeland CBRN emergency preparedness enterprise of 1962 versus 2014 and address their similarities and differences. In 1962, the Cuban Missile Crisis occurred over a 13 day period in October. The crisis centered on the former Soviet Union placing intermediate-range nuclear missiles in Cuba. 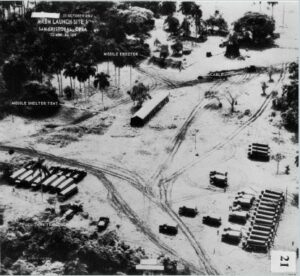 The Cuban Missile Crisis was the closest the world ever came to a nuclear war. Fortunately, the negotiating efforts of President John F. Kennedy and Premier Nikita Khrushchev averted a nuclear war.

In 1961, President Kennedy created the Office of Emergency Preparedness inside the White House to handle the growing risk of natural disasters. He also created the Office of Civil Defense (OCD) in July 1961, which was part of the Department of Defense (DoD). As specified in the Presidential Executive Order 10952 dated July 20, 1961, the OCD was charged with, among several other duties, the “…development and execution of (i) a fallout shelter program; (ii) a chemical, biological and radiological warfare defense program; and (iii) all steps necessary to warn or alert Federal military and civilian authorities, state officials and the civilian population.” 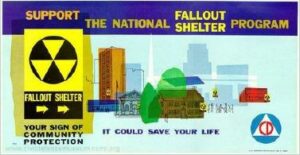 President Kennedy advocated the use of fallout shelters as part of the U.S. response to survive a nuclear attack by the Soviet Union. He believed the lives of families not directly hit in a nuclear attack could be saved if they could take shelter. 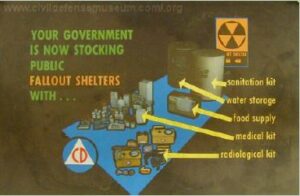 In the summer of 1961, at the request of President Kennedy, Congress appropriated $207.6 million to identify and mark spaces in existing buildings for fallout shelters, stock the shelters with food and other supplies, improve air-raid warning systems and include space for shelters in new Federal buildings. With these funds, the OCD, assisted by the Army Corps of Engineers and the U.S. Navy’s Bureau of Yards and Docks, began organizing surveys to identify possible fallout shelter spaces for 104 million Americans in existing structures. The OCD also began distributing large numbers of “Shelter Radiation Kits” that contained survey meters and dosimeters to public shelters and monitoring stations. OCD enacted many programs against the threat of a Soviet nuclear attack. This included booklets, brochures and videos on ways to protect one’s self and how to build a backyard or basement bomb shelter. On February 16, 1962, Presidential Executive Orders 10997 through 11005 assigned emergency preparedness functions to the Secretary of the Interior, Secretary of Agriculture, Secretary of Commerce, Secretary of Labor, Secretary of HEW, Postmaster General, Administrator of the Federal Aviation Agency, Housing and Home Finance Administrator, and the Interstate Commerce Commission. Each one was required to prepare national emergency plans and develop preparedness programs. These plans and programs were designed to develop a state of readiness in these areas with respect to all conditions of national emergency, including attack upon the United States. The “attack upon the United States” included chemical, biological and radiological (CBR) attacks.

The focus of the U.S. civil defense program in the early 1960s was predominantly concerned with a nuclear strike by the Soviet Union against our homeland. The fallout shelters that were constructed during this period were designed to protect against nuclear fallout and not against chemical and biological agents.

On June 19, 1978, President Carter established the Federal Emergency Management Agency (FEMA). The role of FEMA was to consolidate emergency preparedness, mitigation and response activities into one federal emergency management organization. Until 2001, the U.S. civil defense duties were performed by FEMA. After the September 11, 2001 terrorist attacks against the United States, President George W. Bush issued Executive Order 13228 on October 8, 2001, establishing the Office of Homeland Security (OHS) and the Homeland Security Council. 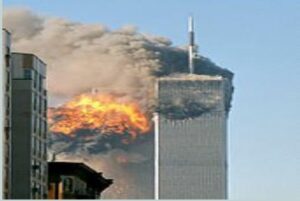 The north face of Two World Trade (south tower) immediately after being struck by United Airlines Flight 175 on September 11, 2001. (Courtesy of Wikimedia Commons/Released)

The function of the OHS was to coordinate the executive branch’s efforts to detect, prepare for, prevent, protect against, respond to and recover from terrorist attacks within the United States. OHS became the Department of Homeland Security (DHS) on November 25, 2002 by the Homeland Security Act of 2002. The five core missions of DHS are the following: (1) prevent terrorism and enhance security, (2) secure and manage our borders, (3) enforce and administer our immigration laws, (4) safeguard and secure cyber-space, and (5) ensure resilience to disasters.

FEMA was absorbed into DHS effective March 1, 2003. As a result, FEMA became part of the Emergency Preparedness and Response Directorate of DHS. It became FEMA again on March 31, 2007 but remains in DHS. FEMA has the U.S. civil defense mission as it relates to the U.S. national preparedness mission.

The 2014 Quadrennial Defense Review (QDR) was released by the Secretary of Defense on March 4, 2014. The QDR is a legislatively-mandated review of DoD strategy and priorities. The 2014 QDR prioritizes three strategic pillars in a period of fiscal austerity: (1) defend the homeland, (2) build security globally, and (3) project power and win decisively. The QDR discusses a world that is growing more volatile, more unpredictable, and in some instances, more threatening to the United States.

One section of the QDR contains an assessment of the QDR by General Martin E. Dempsey, Chairman of the Joint Chiefs of Staff. He states that he believes there are six national security interests for which we are responsible [Note: These are directly derived from the four core interests outlined in the National Security Strategy]. The first two are: (1) survival of the nation and (2) prevention of catastrophic attack against U.S. territory. He goes on to state that based on these six interests, he and the Joint Chiefs used the prioritization of 12 identified missions to advise the Secretary of Defense and President and determine how to distribute the force among our Combatant Commanders. The first and second most important missions are the following: maintain a secure and effective nuclear deterrent and provide for military defense of the homeland. The fifth and sixth most important missions are combat terrorism and counter WMD.

Funding for homeland defense against CBRN weapons remains a high priority. In the FY 2014 omnibus appropriations bill signed into law on January 17, 2014, DHS funding for such purpose includes the following: 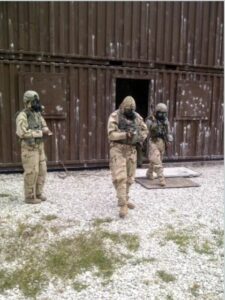 When one compares the elements of CBRN emergency prepared-ness in 1962 versus 2014, the similarities are the following:

Several differences that exist today versus 1962 are the following: