what the biodefense communities have known about the efficacy of expedient masks to protect against infection by aerosolized agents? To what degree are particles of different sizes absorbed in the lung, re-exhaled without absorption, or captured in the mucosal cilia?

HDIAC received the following technical inquiry (TI) regarding research on expedient (improvised) masks and deposition of particles in the lungs:

This may be more of a bibliographic search than a technical inquiry — I am interested in what the biodefense community has known about the efficacy of expedient masks to protect against infection by aerosolized agents. Until very recently, the Public Health community has not done many studies, or put much credence, into studying the effectiveness of expedient masks. If the biodefense community had done those studies, it is not clear why they were never communicated effectively to Public Health.
A related question is the degree to which particles of different sizes, from sub-micron to tens of micron, are absorbed in the lung; re-exhaled without absorption (which I understand happens for sub-micron particles) or are captured in the mucosal cilia (which I understand happens for particles much over 10 micron diameter). But I admit that I have heard these size limits for absorbed particles without understanding the ways in which these facts were determined [1].

NOTE:  In a follow-up with the TI owner, the following additional details were provided:

By “expedient masks,” I meant improvised or homemade masks — ones that are not surgical masks or N95 respirators that are manufactured for the purpose of protecting healthcare and other workers from particulate or aerosol hazards [2].

HDIAC undertook a review of current open-source literature in search of any studies by the biodefense community on expedient masks. Additionally, HDIAC analysts conducted research to provide data on the degree to which particle size affects absorption in the lung. HDIAC analysts consulted with subject matter experts (SMEs) across industry and academia and undertook a literature review of publicly available data, as well as the Defense Technical Information Center (DTIC) Research & Engineering (R&E) Gateway.

2.1 Current Efforts by the Biodefense Community

A search of the DTIC R&E Gateway shows on the term “expedient mask,” “homemade mask,” or “improvised mask” resulted in fewer than 100 returns. A review of the resultant documents yielded a small number of results on expedient masks, and most were very dated. The results are provided in Table 1.

HDIAC contacted the U.S. Army Combat Capabilities Development Command Chemical Biological Center (CCDC CBC). The CCDC CBC Chief of Staff reports that the organization is working on studies involving N95 masks (though nothing on expedient masks), and the work has not been published yet.

HDIAC also contacted Chemical, Biological, Radiological, and Nuclear Defense (CBRND) experts at the Guardian Centers of Georgia, an HDIAC subcontractor, seeking information they may have on research efforts on expedient masks by any of the first responders they trained. Mr. Kerry O’Connell (Chief Warrant Officer 3, Retired [CBRN Defense Officer]) confirmed that none of the agencies with which they work are doing any research into field-expedient masks. 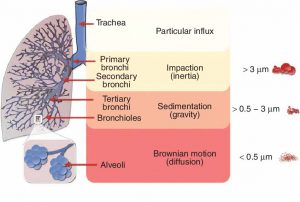 Figure 1:  Pulmonary deposition of inhaled particles and their way of separation in healthy lung-dependent on the particle size [4].

A number of mechanisms determine deposition within the respiratory tract, including inertial impaction, gravitational sedimentation, and Brownian diffusion. Electrostatic effects may also contribute.

Small particles (1–5 μm) diffuse deep into the lung tissue, depositing in the small airways and alveoli, with more than 50% of the 3-μm diameter particles being deposited in the alveolar region by a number of mechanisms including diffusion and sedimentation. Particles less than 3 μm have an approximately 80% chance of reaching the lower airways, with 50-60% being deposited in the alveoli. In the alveolar region, air velocity is negligible, which causes the contribution to deposition by inertial impaction to be negligible as well. Particles in this region have a longer residence time and are deposited by both sedimentation and diffusion. Deposition due to sedimentation affects particles down to 0.5 μm in diameter, whereas below 0.5 μm, the main mechanism for deposition is by diffusion [5].

In general, particles with an MMAD of 5–10 μm are mainly deposited in the large conducting airways and oropharyngeal region. Larger particles (greater than 10 μm) impact further up the respiratory airways due to greater inertia, depositing in a size-dependent manner from the nasal passages to the larger bronchioles. Many authors define large droplets as particles with a diameter of 10–20 μm; these particles will settle rapidly and will not be deposited in the lower respiratory tract [6, 7].

Impaction is the physical phenomenon by which the particles of an aerosol tend to continue on a trajectory as they travel through the airway rather than conforming to the curves of the respiratory tract. Particles with enough momentum (momentum is a product of the mass and velocity) are affected by centrifugal force at the points where the airflow suddenly changes direction, colliding with the airway wall. This mechanism plays a significant role in the deposition of particles in the tracheobronchial region, particularly at bends and airway bifurcations. Impaction mainly occurs in the initial ten bronchial generations (divisions), where the air speed is high and the flow is turbulent, and primarily affects particles larger than 10 μm, which are mostly retained in the oropharyngeal region, with a large amount impacting on the larynx. These large particles are subsequently swallowed [3, 5].

Sedimentation is the phenomenon by which particles less than 5 μm with sufficient mass are deposited due to the force of gravity when they remain in the airway for a sufficient length of time. This mechanism predominates in the last five to six bronchial generations, in the smaller bronchi and bronchioles, where the air velocity is low and the residence time is therefore longer [3–5].

Diffusion, also referred to as suspension, is the phenomenon by which deposition occurs as a result of minute particles (smaller than 0.5 μm) of an aerosol moving erratically from one place to another and colliding with other small molecules in the alveolar space, where the air velocity is negligible. Contrary to impaction and sedimentation, Brownian diffusion increases with decreasing particle size. Generally, these particles are not deposited and are instead expelled once again upon exhalation [3, 8].

2.3 Methods for Determining Particle Deposition in the Lung

There are many ways in which lung deposition of particles has been studied to date. These methods feature modeling, where the first models of aerosol deposition in the lungs were based on simple pulmonary morphologies [3]. The first mathematic model, however, was created in 1935 based on the anatomical understanding at the time. This mathematical model assumed a series of dimensions, flow speeds, transit times, and types of ramification for each generation according to the three basic mechanisms of deposition discussed in this report. This model established the basic norms for the development of later, more sophisticated models. Current studies are based predominantly on computational fluid dynamics, which is a technique for simulating fluid movement by trying to resolve their governing mathematic (Navier-Stokes) equations. Through these simulations, it is possible to model airways and predict the behavior of air and aerosol particles within it (Figure 2). 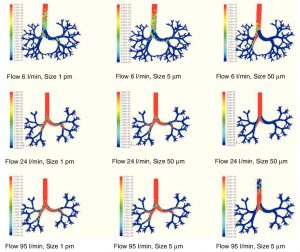 Figure 2:  Results of the simulation with computational fluid dynamics of particle behavior at different sizes (1 μm, 5 μm, and 50 μm), which are dragged by flows of 6, 24, and 95 l/min. The red areas indicate a high density of trapped particles. It can be observed that, as the size of the particle and flow increases, more particles tend to become trapped in more central regions of the airway due to impaction [3].