Aviation remains the obvious target, and commercial airliner targeting has been described by experts as an al-Qaeda ‘obsession.’ [2] Not only is the potential destruction of a commercial aircraft an extremely high profile event that attracts worldwide publicity, but blowing a hole in an aircraft fuselage, causing the aircraft to breakup through rapid decompression, only requires a small explosive device. [3]

Current intelligence processes and security measures have halted most terrorist bomb attacks on the aviation industry before they progress to anywhere near execution, with some obvious exceptions. This prompts the question, “How are terrorists such as Umar Farouk Abdulmutallab, the 2009 ‘underwear bomber,’ able to move explosives through airport security screening undetected?” Additionally, why are seemingly ad hoc, short notice security measures, such as inspections of electronic devices, pat downs and banning of liquids, required on many flights even though explosive trace detection technology is being employed throughout airports worldwide?

Recently, a team at the University of Tasmania in Australia developed leading technology innovation for the next generation of explosive trace detection equipment. The team developed technology that can identify military and commercial grade explosives and both inorganic and peroxide molecules found in many ‘home-made’ explosives. The key breakthrough of this technology is its ability to accurately and consistently detect trace quantities of inorganic explosives within 60 seconds – a world first for trace detection technology.

It is widely acknowledged that the greatest terrorism threat to homeland security in western countries in the coming years is posed by foreign fighters returning from conflicts such as those currently occurring in Syria and Iraq. These hardened extremists will bring hardline beliefs and training in fabricating and employing explosives to achieve maximum effect with them.

It is likely many of these returning fighters will have had training in devices designed to avoid detection. They may have had training from figures such as radicalized, Saudi-born Ibrahim Hassan al-Asiri, who focuses on developing new, innovative and difficult to detect explosives. 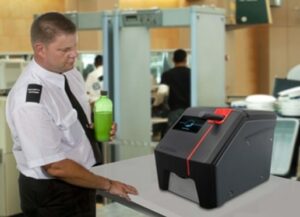 (Above and Below) Scantex proof-of-concept demonstrator in use by airport security for explosives testing. (Courtesy of Grey Innovation/Released)

While explosives such as TNT, RDX or Semtex may be extremely powerful, their production in ‘back-yard’ laboratories is problematic. Not only is the chemical process difficult, requiring commercial grade equipment, but some steps of the process can be extremely dangerous. Therefore, it is much more likely that these returned foreign fighters will turn to ‘home-made’ explosives. Such explosives are produced using rudimentary processes and chemicals that are generally easy to obtain. These types of explosives fall into either inorganic salt-based or organic peroxide-based categories.

Home-made explosives have been prevalent on the world stage for some time. For example, ammonium nitrate aluminum has been widely used in improvised explosive devices throughout the conflict in Afghanistan. This is largely because of both the ease of access to the chemical components (ammonium nitrate fertilizer and aluminum powder) and the safety and ease with which they can be manufactured in vast quantities. Other infamous events that used inorganic salt or peroxide-based explosives include:

Perhaps one of the most understated attractions of ‘home-made’ explosives for terror cells is that many of these types of explosives currently fall within the grey area of what can be accurately identified by current explosive trace detection technology. Presently, most inorganic salts and peroxides cannot be identified by the same detection unit, which increases the likelihood of successfully smuggling the dangerous substance through screening areas. 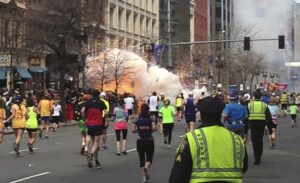 Image of the explosion during the Boston marathon bombing, April 15, 2013. (Courtesy of www.nationalreview.com/Released)

Much of the technology behind many current explosive trace detection units is effective in identifying military and commercial grade explosives. However, there is no clear option for one system to detect inorganic salt-based and organic peroxide-based explosives in addition to commercial and military explosives. This is because inorganic salts do not contain the nitrogen molecules found in most explosives, and organic peroxide molecules are difficult to identify using many common trace detection methods because of their volatile nature, making novel detection methods necessary.

One of the most common explosive trace detection technologies is IMS, developed over 25 years ago and now widely used in airport screening. In IMS, the samples are analyzed through a process where the explosive molecules are ionized and then passed through a drift region. The drift time is calculated (usually only milliseconds), and this calculation is used to identify and classify the specific explosive. [4]

A shortfall of this system is that peroxide-based explosives are generally too volatile for successful trace detection; however, the technique has some ability to detect peroxide explosive precursors such as acetone and hydrogenated water molecules. [5] The limitation of IMS for detecting inorganic salt-based explosives is that those explosives are not volatile, making ionization difficult. Ammonium nitrate is an exception, and it can be detected by IMS because of the slight volatility of ammonia.

MS uses a process in which the explosive molecules are ionized in much the same way as the initial stages of the IMS process. Identification is achieved through measurement and comparison of mass-to-charge ratios of ionized molecules through a process of acceleration and deflection using a magnetic field. MS can be very effective in identifying volatile organic peroxides; however, the process fails to detect inorganic salt-based explosives.

The IC process has proven to be reliable for identifying very small traces of inorganic salt-based explosives. However, analysis times of up to 25 minutes make this process prohibitively slow for use in high-throughput screening applications. [5]

While there has been much speculation that nanosensor technology will be the next generation technology for explosive trace detection, a team in Tasmania, Australia has developed a novel capillary electrophoresis technique known as Scantex. This technology shows promise for inclusion in the next generation of explosive trace detection screening equipment. To date, it has attracted significant interest and funding from both the Australian government and the U.S. Department of Homeland Security for homeland security applications.

Professor Michael Breadmore, from the Australian Centre for Research on Separation Science (ACROSS) based at the University of Tasmania, led the team that developed an electrically driven analysis device that offers many advantages over traditional trace detection methods. A recently developed proof-of-concept demonstrator showed that capillary electrophoresis can detect inorganic salt-based and organic peroxide-based explosives. The 60 second analysis time makes the technology suitable for high-throughput screening applications. The accurate and consistent identification of inorganic salt-based explosives in such a short time is a world first for any explosive trace detection system.

The capillary electrophoresis process involves a sample being taken from a surface via a swab that is then inserted into the testing unit. Within the unit, the sample is refined using a fluid reagent that draws out target molecules for identification. Minute quantities of the solution are then injected into a series of microscopic pipes where they are energized with a high voltage current to detect inorganic salts and irradiated with UV-light to identify peroxides via degradation.

This process has proven to be highly accurate, providing consistent results during trials. While developed specifically for inorganic and peroxide explosives, the same technology can also be used to detect commercial and military explosives, although the ability to do so rapidly has yet to be developed. If done, this could herald the introduction of a single unit with the ability to screen all types of explosives with a high degree of sensitivity and minimal false positives in a manner fast enough to allow functional screening of people in high-throughput areas. 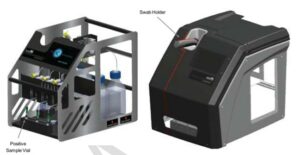 Scantex proof-of-concept demonstrator (Above) and interface (Below). (Courtesy of Grey Innovation, Released) 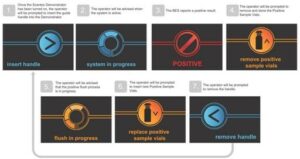 While many may be surprised that the world’s first breakthroughs in explosive trace detection are coming out of the University of Tasmania in the picturesque city of Hobart, Australia, ground breaking research is not new to the ACROSS team. This team prides themselves on conducting multi-institutional, internationally prominent and genuinely collaborative research. [6]

This work is likely to result in Scantex units being fielded in thousands of secure area screening locations around the world. With the growing international interest in ‘safe community’ initiatives and the number of screening lanes growing to over 400,000 internationally (6,500 for airline passengers), it is likely that the need for low-cost, high-sensitivity technology like Scantex will increase. [4] While an all-in-one detection unit was previously a dream, advances in technology, like capillary electrophoresis, have made this a reality for homeland security. 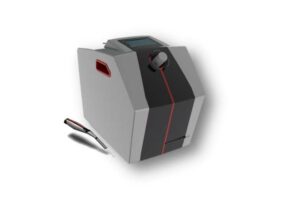 Mr. Garth Callender is a former Australian Army officer with extensive experience in the counter IED field. As a junior officer, he commanded security elements protecting the Australian Embassy in Baghdad and saw the impact of IED strikes first hand. He went on to work in the Australian Counter IED Task Force assisting in coordination of counter IED efforts and providing strategic guidance to government. More recently he commanded a weapons intelligence team in Afghanistan supporting both Australian and U.S. forces. Mr. Callender now works with Grey Innovation, a technology innovation company based in Melbourne, Australia.