The Department of Defense (DoD) has established ambitious goals for its use of renewable fuels for decades to come, and several national-level initiatives have emerged toaid this transition. In 2010, the U.S. Navy’s Great Green Fleet program successfully demonstrated the use of a 50-50 blend of algal biofuel and petroleum as jet fuel for naval aviators, which met or exceeded JP-8 military fuel standards [1]. Additionally, in 2012, the U.S. Department of Agriculture (USDA) collaborated with Airlines for America and Boeing Co. to launch the Farm to Fly initiative, bringing together commercial and military aviation firms to support the U.S. biofuels industry [2]. Half a decade later, after the price of crude oil plummeted from a seemingly sustained high of $100 per barrel to levels chronically under $60 per barrel, several technical and economic barriers remain before advanced biofuels can replace significant amounts of fossil fuels. Further complicating this transition is the retreat of several next-generation biofuels firms from the energy space toward other high value markets, including Solazyme (now TerraVia), Sapphire Energy, and Heliae [3].

This recent shift in the economic viability of the algal biofuel industry raises an important question. Which is the narrower bottleneck preventing the widespread commercialization of algal biofuels: an insufficient increase in productivity derived from advances in upstream production from algal strains or the need for an efficient and adequately rich feedstock? 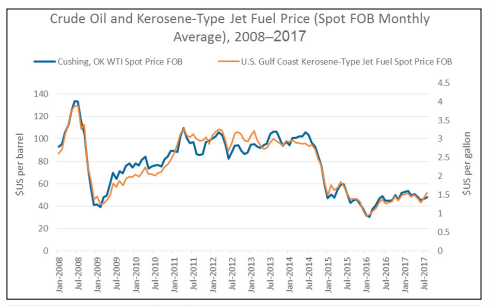 Despite the sharp drop in crude oil prices since 2014, research and development (R&D) into algal biofuel continues apace in academia and industry alike. Increasing algal oil production at the cellular level has long been a primary target of genetic engineers. At the beginning of 2017, Synthetic Genomics and Exxon Mobil Corp. extended their $600 million agreement, first signed in 2009, to jointly conduct research into advanced algal biofuels. Recently, the Synthetic Genomics team demonstrated
a doubling of lipid production in the Nannochloropsis gaditana microalga that, under natural conditions, has a lipid content of approximately 20 percent. It is estimated this newly-engineered strain could produce up to 1,600 gallons of lipids per acre per year, a high level of productivity [4].

While Synthetic Genomics’ focus is on increasing oil at the cellular level, researchers at the Pacific Northwest National Laboratory (PNNL) have focused on increasing mass productivity. In 2016, PNNL researchers explicated the mechanism in the Synechococcus strain of algae that allows the strain to triple in size to accommodate a rapid expansion and to flourish under intense light by using energy inputs to keep growing [5]. The importance of this research lies in the efficient coupling of photosynthesis and productivity. This development is central to the advancement of biotechnology applications based on solar energy, and researchers were able to delineate putative biological principles that may allow unicellular cyanobacteria to achieve ultra-high growth rates via photophysiological acclimation and effective management of cellular resources under different growth regimes [6]. The algal-focused Development of Integrated Screening, Cultivar Optimization and Validation Research project is a $6 million joint PNNL-Sandia National Laboratories project designed to determine the toughest and most commercially viable strains of algae, with the goal of identifying four promising strains from at least 30 initial candidates. Additionally, researchers at Los Alamos National Laboratory are focused on understanding the molecular tools, technologies, and resources used in
strain improvement; on identifying improved strains; increasing algae biomass productivity, and on increasing the energy-efficiency of algae processing steps.

In terms of mass algal lipid production, the green colonial unicellular microalga Botryococcus braunii is considered to be a particularly hydrocarbon-rich alga. It can produce C21 to C33 odd numbered n-alka-dienes, mono-, tri-, tetra-, and pentaenes, and even C40 isoprenoid hydrocarbons [7,8]. However, a slow rate of growth (typical doubling time clocking in at 72 hours [9]) makes it an unpopular candidate for mass culturing—but that could change in the future. In May 2017, the algal genetic engineering community celebrated the genome sequencing of the fuel-producing green microalga B. braunii [10]. It was the first complete genome sequencing of the alga Chlamydomonas reinhardtii that paved the way to the sequencing of B. braunni. This significant step will further help in manipulating the B. braunii cells either to make specific types of oil directly, or by transferring the genes into other photosynthetic organisms to have them produce the oil [10]. How the B. braunni or N. gaditana and other strains might become commercial in scale is another question.

So far, genetically-modified algae have been grown in closed photobioreactors to prevent their escape into natural ecosystems (see Figure 4). However, in 2017, Sapphire Energy, the U.S. Environmental Protection Agency (EPA), and the University of California, San Diego published the first EPA-approved outdoor field trial of a genetically engineered alga, Acutodesmus dimorphus, for fatty acid biosynthesis and green fluorescent protein expression. The 50-day field trial led to the conclusion that genetically engineered algae can be successfully cultivated outdoors, while maintaining the function and persistence of their engineered traits, all without adversely affecting native algae populations [11].

Increasing cellular oil by genetically modifying algae strains has merit as a focus of biofuels R&D, as demonstrated by Synthetic Genomics’ effort in doubling the oil content of natural wild strains of algae and by PNNL’s research regarding the tripling of algae biomass production for increased oil output. However, these advances in the upstream production of biofuel precursors must be coupled with improvements in providing the algae with an adequate feedstock to allow for efficient growth at a commercial scale. Purchasing commercially-available nutrients can add a significant cost burden for a biofuels firm. For example, Solazyme’s oil-producing alga strain, Chlorella protothecoides, was grown on sugars in fermenters [12]. However, the high cost of using industrial sugars as a feedstock, coupledwith severely reduced operating margins stemming from the crash in crude oil prices, led the company to refocus on the health food protein market [3]. Reducing the cost of acquiring feedstock requirements has thus emerged as an important focus of next-generation algal biofuels R&D, with potential outcomes that may rival the genetic engineering of algal strains in its effect on making algal biofuel productive on a commercially sustainable level. 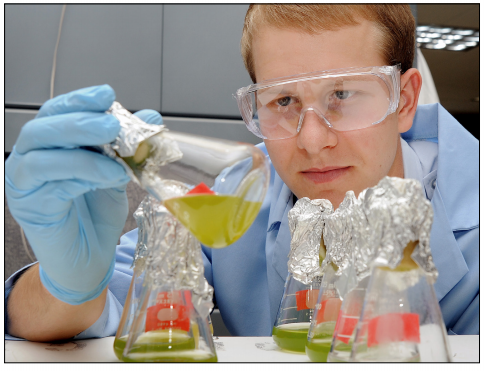 Wastewater as a Feedstock for Algal Biofuel

Wastewater runoff is a known environmental problem that contributes heavily to the eutrophication of its receiving natural water bodies (see Figure 5). This side effect of runoff increases the overall cost of wastewater treatment to cities and municipalities.

A biofuel production pathway based on an oleaginous algal strain, developed by GSR Solutions [13], is being used to capture the free nutrients at the point source of nutrient runoff. This process capitalizes on the presence of excess nutrients in the waste streams. In the long run, it could be a sustainable model for oil and coproducts generation from dairy farm effluents that are typically loaded with excess nutrients, including nitrogen and phosphorus. In 2014, with support from the USDA, GSR Solutions teamed up with local stakeholders and end users of the algal biofuel being produced to bring together the complete supply chain, including members of the Commercial Aviation Alternative Fuels Initiative, the New England Fuel Institute, the Vermont Fuel Dealers Association, and others [14]. The feasibility of using algal biofuel as a crude oil output replacement source in this Northeast-based project was benchmarked to the industry standard, notably, that of Solazyme’s oil production levels that were aimed at serving the Navy’s Great Green Fleet. Attempts to grow algal monocultures in high-rate open ponds for periods longer than three months have not succeeded to date, primarily due to the contamination monocultures by wild algae, or by grazing from zooplankton [9]. Naturally-occurring algal assemblages (or polycultures) are low in oil content compared to the monocultures that have been used for dedicated biofuel production sources, and the natural strains are unlikely to match the biofuel production rates demonstrated by Solazyme. For example, the algal assemblage used by Algal Turf Systems for treating wastewater had a fatty acid content ranging from 0.6 percent to 1.5 percent of dry weight, while recovering more than 95 percent of the nitrogen and phosphorous from the culture [15]. Various low-quality wastewater streams, including municipal, industrial, and agricultural (specifically dairy and piggery farms), have been studied for their feasibility as nutrient sources for growing algae [15,16,17], but, so far, no commercial-scale pathway for algal oil production has emerged.

Several of the aforementioned groups have turned to wastewater as a feedstock for their algal cultures but none have successfully produced high quantities of the lipids/oil necessary for commercialization. Still, wastewater-integrated systems, in theory, hold great potential for future advances in R&D. In addition to the EPA’s well-established regulations for the discharge of dairy farm nutrients, in 2014, the USDA’s Biogas Opportunities Roadmap reinforced the need for anaerobic digesters to improve on their nutrient recovery capabilities (particularly nitrogen and phosphorus) from biodigester effluent and solids. GSR Solution’s 2014 project using wastewater as an algal oil feedstock—supported by local stakeholders and farms—could serve as a potential model for the sustainable production of biofuel.

5. Rickey, T. (2016). When the going gets tough, the tough get growing. Pacific Northwest National Laboratory. Retrieved from http://www.pnnl.gov/news/release.aspx-?id=4298