Although biofuel production has intensified in the last decade, liquid fuels derived from oil remain the largest contributor to transportation. [1] Thus, biofuels have yet to make a significant dent in mitigating climate change, which is due in large part to greenhouse gas emissions from fossil fuels. [2] And substitutes such as electric cars, compressed natural gas and hydrogen fuel cell vehicles remain niche contributors.

The U.S. Department of Defense is the largest government consumer of energy in the United States, with petroleum-based liquid fuels composing approximately two-thirds of the DoD’s consumption. [3] The military is shifting toward renewable energy use as an operational imperative. Utilizing alternative energy sources, such as solar, wind and biomass energy, can increase warfighter efficiency, enhance energy security and cut installation and operational energy costs. Several military bases use renewable energy sources, like solar and wind farms, to offset energy costs and the DoD directs by 2025 at least 25 percent of any DoD facility consumption to come from renewable energy sources. [4]

Biological sources for liquid fuels have a long history. Alexander Graham Bell advocated for producing ethanol from plant biomass nearly 100 years ago. [5] His vision, however, is only partially realized due to technological, economic and policy challenges. Two largescale sources of ethanol are now well developed: the use of sugarcane juice and corn starch. Sugarcane ethanol is widely adopted in Brazil, and presently provides a large proportion of the liquid fuel needs for the country. [6] Corn ethanol produced in the United States expanded rapidly in the past decade, having reached over 15 billion gallons per year. [7] The Army is exploring the use of a fuel cell that runs off of corn ethanol. [8] 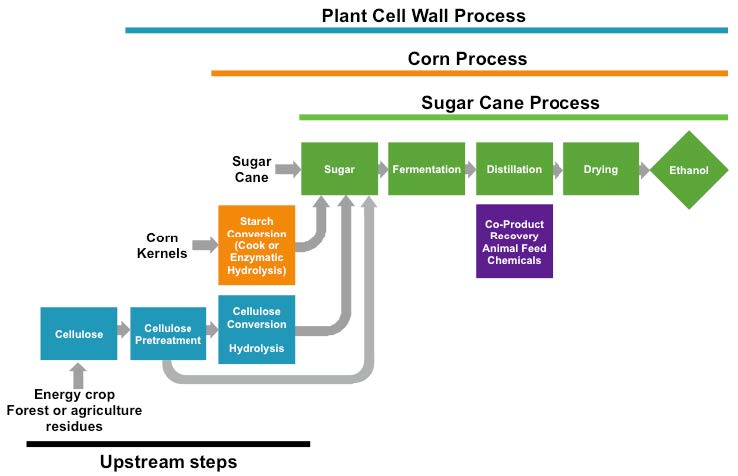 Sugarcane and corn ethanol production, however, are highly sensitive to economic conditions, and have been impacted by fluctuations in the price of oil and the value of the dollar. Further, the American car fleet limits the amount of ethanol that can be blended into the fuel mix, the so-called “blend wall” of approximately 10-15 percent ethanol (E10 and E15 gasoline). [9] This limit is driving the search for biofuels that more closely mimic present hydrocarbons derived from oil.

A far more abundant source of liquid biofuels, termed “lignocellulosic biofuels,” could come from perennial plants, such as grasses or fast-growing trees, in the form of carbon fixed in the architectural component of plants–plant cell walls. In 2011, the Department of Energy extensively modeled how much plant biomass could, in principle, be used in the United States. [10] The DOE estimates that energy crops and food crop residues could provide more than 1 to 2 billion barrels of biofuel per year, or up to about 30 percent of the liquid fuel presently used in the United
States. There are many economic, environmental and policy challenges, however, to scaling up lignocellulosic biofuels. [2,10]

The technological challenges for making biofuels from plant biomass is illustrated in Figure 1. Sugarcane juice requires the least pre-processing before it is fermented by yeast to make ethanol. A step up in technological difficulty and cost, ethanol production from corn requires the additional process of breaking down starch to soluble sugars before yeast fermentation. In the United States, corn ethanol production is highly optimized, but is still being improved, by consolidating starch breakdown with fermentation, for example. [11]

Figure 2. Simplified diagram of reference process of bioethanol production from corn stover. Separate reactor vessels unique to the use of plant cell wall material that require optimization are numbered 1-3. Reference scenario prepared by the National Renewable Energy Laboratory. [13] Other steps not shown include wastewater treatment, burner/boiler for power generation from waste biomass, and ethanol storage. (Released)

Making biofuels from plant biomass is far more complex than making corn or sugarcane ethanol (see figure 1). First, the plant biomass must be transported to a central processing plant, possibly requiring more than 1,000 square miles of agricultural output. [10] Once collected, the plant biomass must be “deconstructed” or broken down to release soluble sugars from the plant cell wall. Breaking down the plant cell wall requires thermochemical treatments, followed by the use of catalysts. Finally, the released sugars must be converted into a usable biofuel. Thus, although
some companies have begun to roll out lignocellulosic ethanol production plants, the Energy Information Administration reports that only about 1.3 million gallons (or about 30,000 barrels) of ethanol were produced between January and July of 2015. [12]

How can lignocellulosic biofuels eventually be produced economically? Many unknowns must be addressed, ranging from how best to break down the plant cell wall to soluble sugars, to the question of which biofuels to make. Should the process be entirely chemical, for example as modeled by the National Renewable Energy Laboratory? [13,14] The main advantage of using an entirely chemical route is the prospect of leveraging scale-up knowledge from the chemical industry. Or would a process that combines biological and chemical steps work more economically, such as the recent rethinking of “acetone-butanol-ethanol” fermentation, followed by chemical upgrading? [15] The NREL devised a reference case for a biological process to convert plant biomass to ethanol (see figure 2). [16] The process uses a thermochemical pretreatment step to increase the exposed surface area of plant cell wall polymers and release the abundant 5-carbon sugar xylose. Pretreatment is followed by enzymatic breakdown of cellulose in the plant cell wall to release the 6-carbon sugar glucose. The enzymes, known as cellulases, are produced in large quantities in a separate reactor beforehand. Finally the xylose and glucose streams are combined in one reactor for co-fermentation by an engineered bacterium, Zymomonas mobilis. The reference case therefore requires three separate reactors, one for the pretreatment step, a second for cellulase enzyme production and a third for enzymatic breakdown of cellulose, followed by xylose and glucose co-fermentation (See Figure 2).

The NREL reference case presupposes the optimal way to convert plant biomass to ethanol should go through glucose and xylose, the most abundant sugars derived from the plant cell wall. But perhaps researchers should learn from nature how microbes consume plants. This is already true for the “cocktails” of cellulase enzymes that are used to break apart cellulose. [16] Many fungi, including those that make the cellulases, figured out how to degrade the plant cell wall and consume both the glucose and xylose components, but do not make biofuels themselves. For example, the fungus Neurospora crassa in nature normally degrades burnt grasslands. The parallel biochemical pathways N. crassa uses to degrade the plant cell wall and consume the resulting sugars have been identified (see figure 3). [17] N. crassa and many other fungi prefer to
consume plant cell wall sugars as short polymers of glucose or xylose, called cellodextrins or xylodextrins, respectively. This natural preference could open up new options for how to produce biofuels from plant material.

Using synthetic biology approaches, the plant cell wall dedicated pathways were moved from N. crassa and related fungi to the yeast S. cerevisiae, to make ethanol by co-fermentation of the 6-carbon and 5-carbon sugars. All of these co-fermentations require more optimization, but they represent a number of new scenarios that hold promise. These include co-fermentation of 1) cellodextrins plus xylose [18], 2) cellodextrins plus xylodextrins, 3) glucose plus xylodextrins, or 4) sucrose plus xylodextrins [17] (see figure 4). In other words, there are now many more options
to choose from compared to the NREL reference case. [16] All of these combinations require rethinking the upstream steps, and could significantly reduce the capital costs of a lignocellulosic biofuel facility. For example, they could lead to less intensive pretreatment and cellulase enzyme requirements. In the longer term, these could be combined with fermentation of other sugars present in the plant cell wall in lower quantities [19], and to produce biofuels other than ethanol that are more hydrocarbon-like. [13-15] 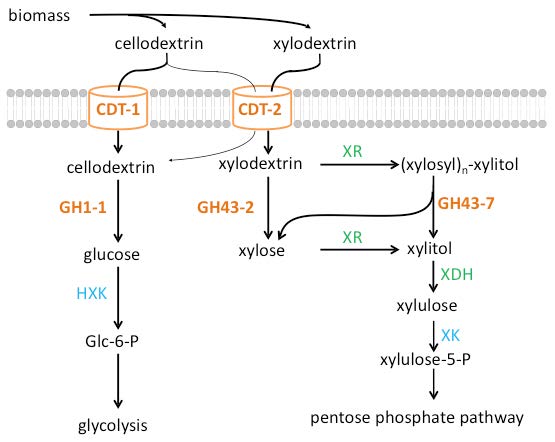 Figure 3. Parallel pathways for oligosaccharide consumption in the fungus Neurospora crassa. The sugars derived from the plant cell wall are cellodextrins from cellulose, and xylodextrins from hemicellulose. Intracellular cellodextrin utilization requires the transporters CDT-1or CDT-2 along with ß-glucosidase GH1-1 and enters glycolysis after phosphorylation by hexokinases (HXK) to form glucose-6-phosphate (Glc-6-P). Intracellular xylodextrin utilization also uses CDT-2, and requires the intracellular ß-xylosidases GH43-2 and GH43-7. The resulting xylose is then assimilated through the pentose phosphate pathway via xylose/xylodextrin reductase (XR), xylitol dehydrogenase (XDH), and ylulokinase (XK). (Figure adapted from Ref. 14/Released)

[17] Although further development of yeast strains capable of co-fermenting different combinations of 6-carbon and 5-carbon sugar streams will be required, the new combinations with cellodextrins and xylodextrins open up many pathways to explore to realize a fully economical lignocellulosic biofuels process.

Often times the most elegant solutions for technical problems come from nature. The newly proposed methods to produce biofuels produced from perennial plants may allow DoD the opportunity to utilize renewable energy and meet mandated goals. The military shift towards renewable energy is both a political and operational imperatives. DoD’s move toward more efficient alternative energy can increase efficiency, enhance security and lower installation and operational energy costs.

Figure 4. New options for co-fermentation of plant cell wall-derived sugars. A) Glucose and sucrose used in first-generation bioethanol production from corn and sugarcane, respectively. B) Glucose and xylose derived from cellulose and hemicellulose proposed for use in co-fermentation of plant cell wall material (ref NREL). C) Oligosaccharides released and consumed by fungi in nature. D) Expanded options for co-fermentation of C6 and C5 sugars. In A) – C), the extra hydroxymethyl in glucose units (C6 sugar) compared to xylose units (C5 sugar) is shown in blue. R=H for cellobiose, xylobiose; R=additional glucose or xylose units for longer cellodextrins and xylodextrins, respectively. (Released) Jamie H. D. Cate is professor of biochemistry and molecular biology and of chemistry at the University of California, Berkeley. He is also a Faculty Scientist at Lawrence Berkeley National Laboratory. His research focuses on the production of biofuels, as well as protein synthesis. He is interested in understanding how microbes extract carbon from plant biomass, an abundant resource for a sustainable chemical industry. Dr. Cate’s lab is using synthetic biology and systems approaches to retool baker’s yeast for biorefinery applications. The lab also probes the molecular basis for protein synthesis, and the structural basis for antibiotic action on the ribosome. Dr. Cate received his Ph.D. in molecular biophysics and biochemistry from Yale University, and has been on the UC Berkeley faculty since 2001. He received a Searle Scholars award in 2000 and was honored with the 2008 Irving Sigal Young Investigator Award of The Protein Society.