Much of the dietary information provided to our military personnel is modeled after outdated recommendations that emphasize processed carbohydrates and sugary sports drinks [1]. Unlike fat and protein, there is no obligate need for carbohydrate consumption in humans [2]. It is well established that organs and tissues in the body readily adapt to fatty acid and ketone fueling [3]. Accumulating evidence indicates that increased availability and utilization of these lipid-based fuels is associated with favorable metabolic and physiologic outcomes, including reduction of fat mass relative to lean mass, enhancement of physical and cognitive measures during aging, and improvement of cardiac performance in response to physical or environmental stress. A well-formulated ketogenic diet (KD) that emphasizes carbohydrate restriction, moderate-protein, fat to satiety, and nutritional ketosis, represents a credible method of supporting physical performance and improving health.

KDs deviate from traditional high-carbohydrate diets, as well as differing from many popular low-carbohydrate approaches (e.g., Paleo diets) that do not elevate ketones. A well-formulated KD includes limited carbohydrates (typically 50g/day or less) and adequate protein (1.2-2.0 g/kg Reference Weight). The remaining calories are derived from fat, which is consumed to satiety (~70-80 percent total kcal/ day on a eucaloric weight-maintenance KD) (see Figure 1).

KDs result in reduced availability of glucose and stimulation of insulin. This metabolic and hormonal state stimulates adipose tissue lipolysis and enhanced fatty acid delivery to tissues that manifests in profound increases in fatty acid oxidation and hepatic ketogenesis.

Ketogenesis and associated metabolic machinery are engrained in human biology as it was necessary to the survival of our ancestors [7]. Following an overnight fast, blood ketone concentrations may reach 0.1-0.3 mM. KDs typically result in ketone concentration between 0.5 mM to 3mM (i.e., nutritional ketosis). The two primary circulating ketones are Beta Hydroxybutyrate (βHB) and acetoacetate. Physiological elevation of blood ketones via KD [8-11] is safe and ensures adequate fuel supply to all organs during periods of decreased glucose availability.

Ketosis is not analogous with ketoacidosis, which is a life-threatening condition typified by hyperglycemia (BG>250 mg/dL), blood acidosis (pH10Mm) hyperketonemia [12, 13]. Risk of ketoacidosis is a concern in uncontrolled type 1 diabetics. Conversely, individuals who produce insulin possess an exquisite feedback mechanism in which βHB provides direct negative feedback inhibition of adipocyte lipolysis, as well as indirect stimulation of insulin secretion—thus preventing ketoacidosis risk [14]. 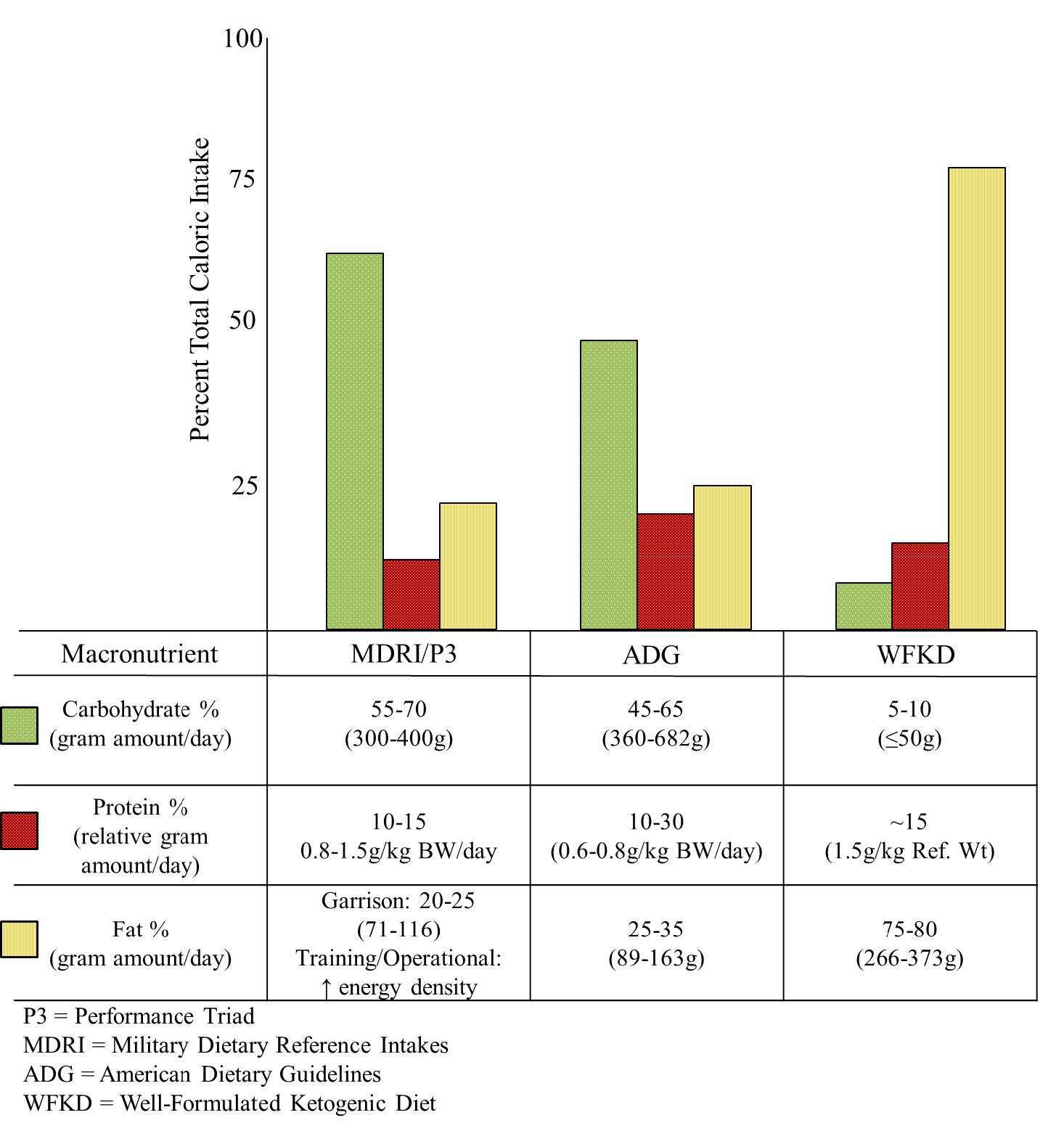 Since the early 1900s, LCDs and KDs have been implemented and studied in neurological diseases [15, 16], weight loss [17-19, 9], insulin resistance [9, 20], cardio-metabolic disease [17, 18, 21, 22], and cancer [23, 24]. Evidence in support of implementing a KD as a therapy to address various pathophysiological and chronic disease challenges in human health [8, 22, 10, 11] has increased dramatically in the past 10-15 years. Healthy, untrained individuals, patients, and athletes are increasingly aware of research related to KDs. As such, KDs should not be dismissed as a fringe concept or fad diet.

A significant body of work indicates that “nutritional” or “physiological” ketosis (defined as circulating ketones between 0.5-5.0 mM) has clinical [25, 26] and performance [27-30] applications due to potent metabolic and signaling changes in humans [31-37]. Additionally, there are many military-relevant health and performance challenges that may be affected by nutritional ketosis, as can be seen in Figure 2.

High rates of overweight and obesity present obstacles in military recruitment and physical readiness. Over two thirds (~71-75 percent of Americans within military age range (~17- 24 years) are classified as unfit to enlist [38, 39]. This issue has been cited as a “national security concern” for DoD recruitment and homeland defense at large [40]. Throughout the military, food selection is being investigated in an effort to improve dietary intake amongst military personnel [41]. Body composition improvements (reductions in fat mass relative to lean mass) are amongst the most consistent outcomes reported with KD interventions [42, 32, 43, 33, 44-46, 31].

Several published primary research studies [22, 19], reviews [17], and meta-analysis [47] conclude that a KD is superior to a low fat diet in promoting weight loss without explicit instruction to reduce calories.

In addition to serving as a preferred fuel, βHB is a potent signaling molecule [48] capable of regulating aspects of gene expression, inflammation, oxidative stress, and longevity [48, 49]. Data published in Science in 2013 [50] demonstrated that βHB inhibits class I histone deacetylases (HDAC). HDAC inhibition enhances expression of several genes which increase antioxidant production. βHB has also been shown to inhibit the NLRP3 inflammasome [51], which is recognized as an important mediator of inflammation and metabolic dysfunction related to obesity. 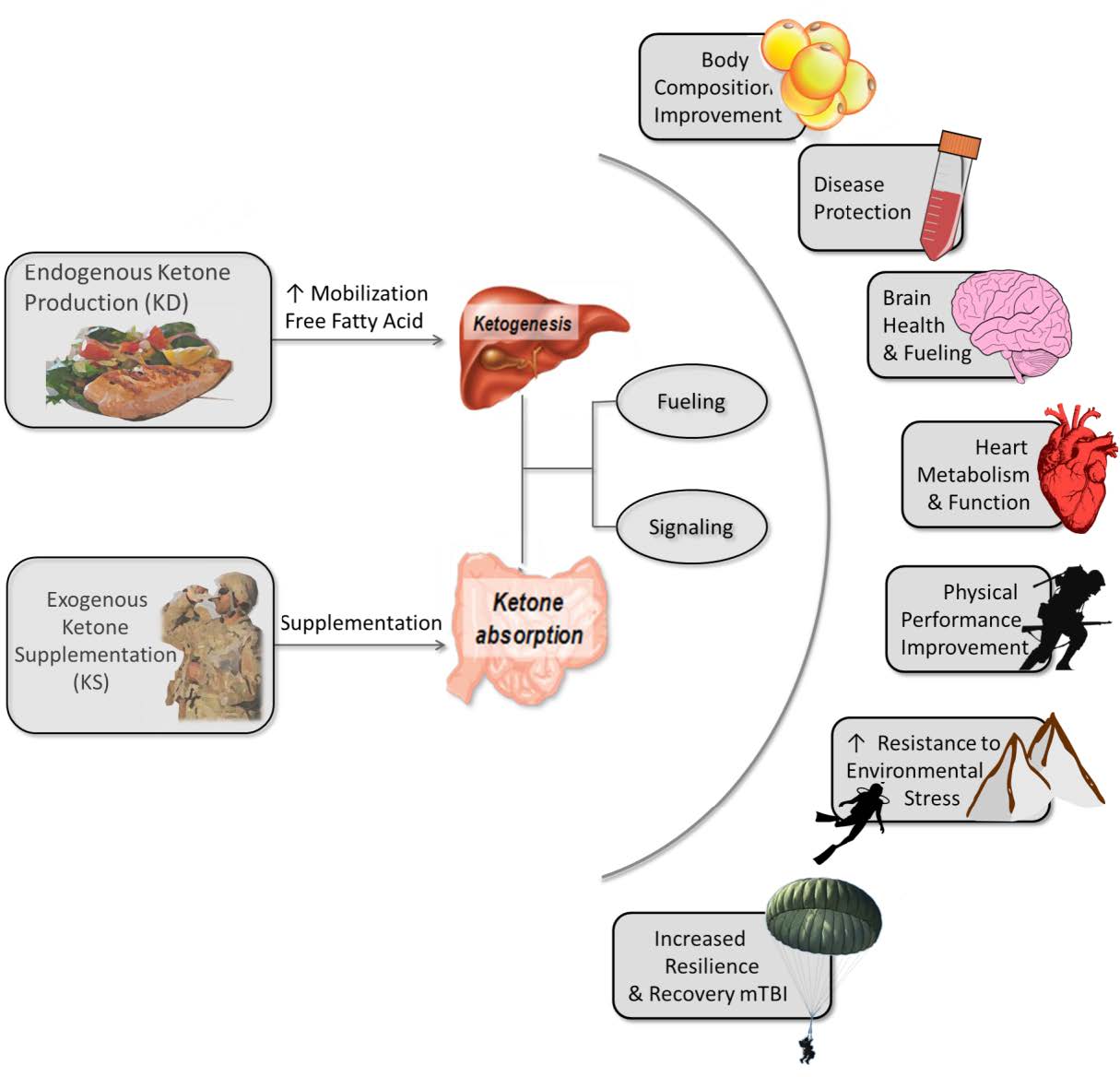 Figure 2. Physiological elevation of ketones in humans may have military relevant effects on health and performance

The brain preferentially uses ketones as a stable and sustainable fuel source. Clinically, KDs were introduced a century ago as an effective treatment to decrease seizures in patients with epilepsy [52-56]. Since then, researchers have produced encouraging evidence for KD use in the prevention and treatment of neurological diseases in addition to epilepsy, such as Alzheimers [16].

According to the results of recent studies, KDs could potentially improve the health and performance of military divers. In a small study of three trained high pressure divers, short duration KDs were shown to lengthen dive time and prevent complications associated with CNS toxicity in divers [57].

Researchers recommended KDs, lasting periods as short as 48 hours, as a tool to improve safety and dive performance. Additionally, results from a separate diver study suggest that a KD may protect against lipid peroxidation and inflammation caused by high pressure enriched air nitrox diving [58].

Human research in tactical groups is needed to establish the direct translation and downstream effects on safety, operational success, as well as precision in training scenarios and combat operations. There are many promising lines of evidence [69, 70] that show improved CNS function with elevated ketone levels based primarily on animal studies [71, 72] and human trials in epilepsy [73], Alzheimer’s [34], and Parkinson’s [74] patients. Ketosis and brain health is one of the most important areas for further study likely to yield significant returns on investment.

Like the brain, the heart has high energy requirements (≥300 kcal/day) and displays impressive metabolic flexibility. The heart readily utilizes ketones in direct proportion to plasma concentration [75]. Increased ketone utilization may positively impact heart function and improve heart efficiency [54, 76]. Cardiac performance is critical in response to physical, environmental, or disease stress [77]. Ketone elevations may provide unique performance advantages to warfighters and tactical athletes in multi-stressor combat scenarios or otherwise. Although in-vivo data are lacking, multiple findings from as recently as 2016 demonstrate that an extended duration KD is a promising strategy for improved heart function in healthy individuals, and may mitigate metabolic dysregulation and consequent functional decline associated with disease states of the myocardium [78, 26].

Ketone fueling has been recommended as potential nutritional enhancement for the warfighter to enhance physical fitness as well as to prevent “avoidable maladies” such as cardiovascular disease [79, 22]. Physiological ketosis is worth investigating as a strategy to optimize cardiac metabolism and function in healthy individuals exposed to external stressors in the battlefield—specifically altitude [80, 81], which exerts additional strain on the cardiopulmonary system during combat scenarios.

In nutritional ketosis, the metabolic needs of organs/tissues are met primarily by ketones and fatty acids. Endogenous fuels storage of fat is, minimally, an order of magnitude larger than carbohydrate storage supply. In various combat scenarios, calorie intake is often inadequate [6] or fasting may be required for >12-24 hours. Keto-adapted individuals would have a significant advantage during these situations in that organs remain well-nourished offering resistance to hypoglycemia induced degradation in performance and cognition.

Coupled with reductions in fat mass, increased fat metabolism [36, 27, 32], relative power output [31], and stamina improvement [37], power to weight ratio enhancement is expected in those that adapt to a KD [29, 84]. Applied across a range of Military Occupational Specialties, this may be an important consideration as non-combat injury rates remain prevalent [85, 86]. In addition to performance benefits, KDs may address injury concerns in two ways. First, leaner soldiers endure less musculoskeletal injuries [87].

Second, KDs alter fueling such that fatigue effects are minimized based upon time to exhaustion performance tests [35, 37]. Leaner soldiers, less affected by fatigue, would have attenuated injury risk which would translate into desirable downstream effects on overall soldier health [88], duty time effectiveness [89], and financial burden [90].

Nutrition is shifting based on accumulating evidence that shows the dietary paradigms such as a KD have therapeutic and health/performance-enhancing effects. There is growing interest in ketones as evidenced by the metabolic dominance program put forth by the Defense Advanced Research Projects Agency [91], which supported work to develop exogenous ketone supplements (KS). It is unclear if KS, which may induce greater elevation in blood ketones than KDs (see Figure 3), produce similar fueling and signaling benefits of KDs outlined in this article.

Strategies which leverage ketone fuels may be advantageous in addressing a range of challenges affecting military [92] and civilian populations [93]. Enhanced fueling and signaling from ketones may provide tactical advantages in personnel exposed to militarily unique scenarios involving physical, cognitive, and environmental stressors [79]. Research evidence has reached a critical mass in support of further investigation of KDs and/or KS strategies in relation to human health and tactical performance across diverse Military Occupational Specialties.