The U.S. Department of Defense is a significant consumer of petroleum fuel. In Fiscal Year 2014, the DoD consumed 87.4 million barrels of fuel. [1] “This fuel supported operations in Afghanistan, Africa, and Iraq, as well as the Department’s global presence, training at home and overseas, and logistical resupply.” [1]

Since Fiscal Year 2000, fuel consumption by the DoD increased, peaking in 2007 and subsequently declining by 30 percent in Fiscal Year 2014. [1] In 2008, approximately 68 million gallons of fuel were supplied per month to support U.S. military operations in Iraq and Afghanistan. [2] Although aircraft used significant portions, the DoD reports the single largest battlefield fuel consumer was generators. A 2008 Defense Science Board Task Force report concluded Army generators consume approximately 26 million gallons of fuel annually in peacetime and 357 million gallons annually during wartime. [2] Furthermore, delivering this fuel to forward operating bases in wartime is hazardous and costly. Cost estimates to ship JP-8, the chosen fuel of the U.S. military based on its one fuel forward policy developed in the late 1980s, [3] to theaters of war in the Middle East are as high as $400 to $600 per gallon. [4]

In June 2008, DoD officials reported 44 trucks and 220,000 gallons of fuel were lost due to attacks or other events during delivery to forward-deployed locations in Afghanistan. [2] A 2010 study found Marine and Army units in Afghanistan averaged one casualty for every 50 fuel and water convoys. [5] Reducing fuel consumption by military vehicles and generators, as well as developing other technologies to provide electricity at forward- deployed locations, would provide financial benefits and reduce casualties.

Micro or mild hybrids offer the least fuel economy and performance benefit, but also the least added complexity and deviation from conventional internal combustion engine powered platform designs. Hence, they provide a distinct retrofit pathway to impact performance characteristics of existing fleets. Mild hybrids are characterized by a motor/generator that is coupled to the ICE often by a belt or in the form of an integrated starter generator, displayed in Figure 1. This motor/ generator can start the ICE and generate electricity to charge a battery or capacitor based energy storage system. 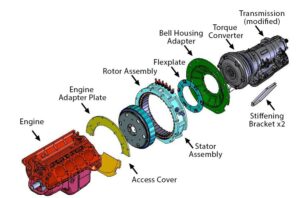 With proper sizing and drive system design, these systems can also take limited advantage of regenerative braking energy availability. In conjunction with an energy storage system, the integrated
starter generator allows for the electrification of mechanical accessories, such as the coolant pump, oil pump, cooling fan, air conditioning compressor and power steering pump. Electrification of these accessories allows them to operate when needed, rather than constantly through mechanical power, therefore reducing parasitic loads on the ICE.

Micro or mild hybrids with electrification of accessories also allow implementation of start-stop technology, where the ICE shuts off when the vehicle is stationary, yet systems such as air conditioning can continue operation. The ICE quickly starts again when movement is demanded.

One obvious benefit of this type of system is silent watch support, where the vehicle is stationary and the ICE can be shut off while an energy storage system supplies electricity to mission-critical equipment. Based on simulations performed at Argonne National Laboratory, such a system installed on a class 8 line-hall truck can provide up to 10 percent fuel economy benefit in urban driving. [6]

Parallel electric hybrids often employ an integrated starter generator, but also utilize another electrical motor(s) (integrated into the drivetrain) to aid in vehicle propulsion, in addition to a direct connection of the ICE to the road (ICE to transmission to differential), as demonstrated in Figure 2. 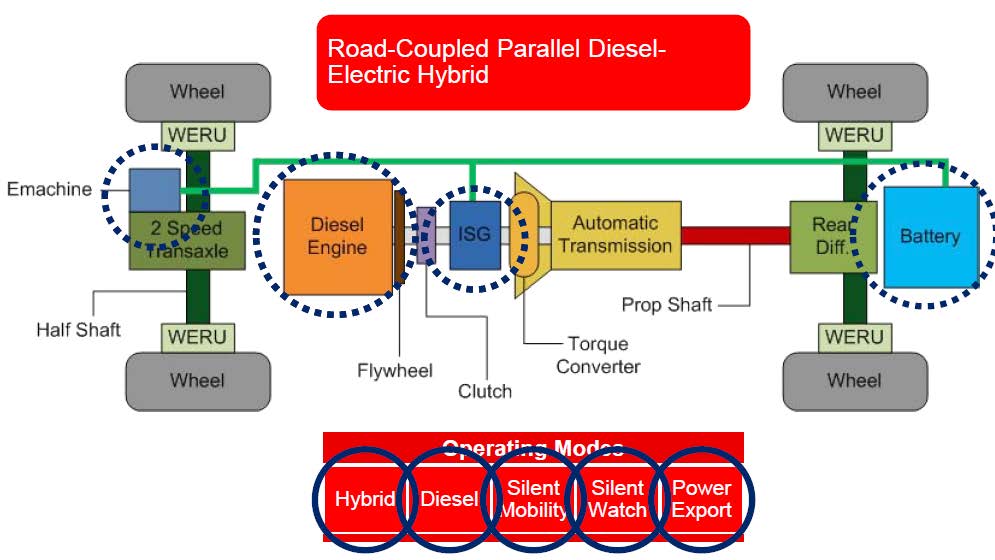 The advantages of this system over a micro/mild hybrid is the enhanced recovery capability during regenerative braking, resultant of larger motor power capacity, and propulsion from the electric motor that is connected to the drivetrain directly or through the road. If the typical operation of a vehicle includes significant brake usage and urban driving, the energy recovered and fuel economy benefits can be more substantial from this type of hybrid-electric system versus a micro/ mild hybrid. However, the system includes more components and its integration is more complex.

Engine downsizing can also provide additional fuel economy benefits with performance levels maintained by the additional power of an electric motor. Another benefit of a parallel hybrid system is, in addition to silent watch support, the vehicle can operate at low speeds with the electric motor and without the ICE, to reduce noise. Simulations of such systems have demonstrated 20 to 40 percent improvement in fuel efficiency over conventional vehicles, depending on operation characteristics. [6]

A series hybrid mechanically decouples the ICE completely from the drivetrain of the vehicle. The ICE connects to a generator, which supplies energy to electric motors. In a similar fashion as the parallel hybrid architecture, an energy storage system can integrate into the system to provide low speed operation without the ICE and regenerative braking capabilities.

Figure 3 provides a comparison of the energy losses from conventional, parallel hybrid and series hybrid vehicles over the urban dynamometer driving schedule and the freeway-dominate heavy duty truck cycle. Note that the magnitude of improvement in fuel consumption is dependent on the operation of the vehicle, among other factors.

In urban driving, represented by the urban dynamometer driving schedule, both the parallel and series hybrid offer more than 20 percent improvement in energy loss, which correlates directly to reduced fuel consumption. However, this improvement in energy loss over a conventional vehicle does not translate to predominantly high speed operation, represented by the freeway-dominate heavy duty truck cycle.

More than 10 percent of the energy loss improvement during urban driving came from the energy capture during braking for both hybrids, but when this mode of operation is reduced (freeway-dominate heavy duty truck cycle), the series hybrid encountered 8.4 percent more energy loss than the conventional vehicle. This additional energy loss can be attributed to increased losses
by the ICE and the motor/generator, and minimal regenerative braking energy available to offset them.

The U.S. military, specifically the Army’s Tank Automotive Research, Development and Engineering Center has been conducting research on hybrid electric military vehicles for more than 20 years. [9] In the second quarter of 2011, TARDEC demonstrated and tested a hybrid-electric Joint Light Tactical Vehicle. [7] This vehicle featured a road-coupled parallel diesel-electric
hybrid architecture displayed in Figure 2.

It also utilized a 4.4 liter high efficiency Ford diesel engine, a 145 kilowatt electric motor positioned between the front wheels, and an integrated starter generator between the diesel engine and transmission. Compared to its predecessor, the M1114 Humvee, modeling and simulation results demonstrated that it could improve fuel economy from 5.19 mpg to 8.15 mpg in wartime conditions, with further gains expected. [7]

Another method of improving the fuel efficiency of ICEs is through capturing a portion of the heat rejected from the ICE with the use of thermoelectric generators and other waste heat recovery systems. In general, a large amount of exergy is available from an ICE in the form of its exhaust gas and cooling systems.

Engine dynamometer results have shown, for a modern heavy-duty diesel engine operating at approximately 40 percent thermal efficiency, nearly 25 percent and 10 percent of the fuel energy input to the engine is lost through the exhaust and cooling systems, respectively. [12]

Obtaining useful energy from these sources, although feasible, has it challenges. Thermoelectric generators are generally associated with less than 10 percent thermal efficiency. During normal operation of a 100 kW engine, for example, this theoretically only allows for less than 7 kW of recoverable energy from the exhaust. In practice, it is found to be even less, generally less than 1 kW. This is because placing a thermoelectric generator directly in the exhaust stream is not necessarily feasible, and heat exchangers or other methods to extract the energy can often impose additional backpressure on the engine causing it to become more inefficient.

Organic Rankine Cycles, developed to recover energy from ICE exhaust, have been calculated to provide up to a 20 percent power increase from the ICE. [13] In practice, these systems are generally only capable of less than 10 percent power increase. In commercial vehicles, which adhere to strict federal emissions standards, their applicability is also limited because modern exhaust aftertreatment systems must be thermally maintained to be effective. This limits where and how much energy can be extracted from the exhaust by waste heat recovery systems.

Military vehicles, however, have the benefit of a lack of exhaust aftertreatment systems because of their incompatibility with world fuels (high sulfur content) and durability concerns due to harsh operating environments. This makes the applicability of waste heat recovery devices more feasible for military vehicles. Integrating any of these hybrid systems or waste heat recovery systems with electrical storage systems has potential to be useful for supplying enough power for onboard systems and other external applications needed in the battlefield.

Cooling systems for military energy storage and export power solutions are complicated by the harsh environmental conditions they must withstand. For example, forced air-cooling systems offer a simple cost effective method of cooling electronic components, but the air must be relatively clean. Dust and dirt buildup on components reduces the amount of heat transferred, which can precipitate failures. [15]

Liquid cooling systems are a solution to this problem, but have their own drawbacks, such as added complexity and cost. To keep electronic components in contact with the cold plate of many liquid cooling systems, compact packaging and space must be sacrificed. [15] Non-conventional liquid cooling technologies, such as immersion in oil, can provide additional heat transfer capability. Circulating cooling oil that immerses components is a technology already in use on commercial hybrid vehicles for battery chargers and transformers. [15]

Other sources of energy generation have been considered and even exist for military applications, especially combat outposts. These include photovoltaic solar panels, waste-to-energy systems, micro-hydro turbines and wind turbines. [17]

These technologies are part of a micro-grid approach, where multiple power generation sources are used to provide electricity to a military installations. Photovoltaic power systems are an attractive solution for energy generation based on their minimal maintenance and environmental impact. Photovoltaic-integrated military shelters are available and offer reduced electrical demand by cooling loads while generating low kilowatt level power. [17]

INI Power Systems, a manufacturer of man portable generators and power systems, offers 360 watt and 180 watt flexible photovoltaic kits for use in conjunction with their power systems. [18] Larger photovoltaic installations could be seen on tactical vehicles, in the form of deployable panels, when the vehicles are stationary. Although photovoltaic technology is not a full replacement
for conventional power generation, as a supplement, and when combined with other technologies discussed, substantial reductions in the U.S. military’s fuel consumption could be realized.