Solar power has been and will continue to be instrumental in the DoD’s efforts to procure more secure and independent energy. On-site solar generation allows the military to be less reliant on aging transmission infrastructure and remote power plants. A solar energy system, coupled with a battery backup, diesel generator or thermal energy storage, can operate in island mode. This allows the solar project to continue to provide power independent from the grid, which provides an extra layer of redundancy and reduces the risk posed by blackouts and potential cyber-attacks. As the military shifts to solar power and away from traditional generation sources, its energy supply will be less dependent on fossil fuels and less susceptible to global supply and price disruptions. Solar power provides the military with locally generated energy insulated from natural or man-made instabilities that could put missions at risk.

Currently, there are more than 36 MW (megawatt) of solar photovoltaic modules installed at different Army bases in at least 16 states. [1] While the Army has enough solar power installed to power well over 5,000 American homes, its solar portfolio is poised to expand significantly in the upcoming months and years. By 2020, the Army aims to produce one gigawatt of energy from renewable sources, earlier than its 2025 mandate. [2[ Two 20 MW solar projects are planned for Fort Irwin, Calif. and Fort Bliss, Texas, as well as a “micro-grid ready” 18.6 MW system at Fort Detrick, Md., which will be able to provide critical power in the event of a power outage. [3] The Army also has plans to install solar panels on the roofs of 4,700 military homes at Fort Bliss, which will total more than 13 MW. [4]

Solar power also has a significant share of the Navy’s current renewable energy portfolio. There are more than 58 MW of solar PV operating at Navy installations in 12 states and the District of Columbia. [5] The Navy has also awarded more than 20 MW of solar PV projects, including installations at Marine Corps Base Camp Lejeune, N.C. and MCB Camp Pendleton, Calif., among others that will come online in the near future. [6]

Solar power will be critical to the Air Force’s efforts to meet its 2016 target. Solar PV power is going to account for over 70 percent of all new Air Force renewable energy capacity added from 2012 to 2017. [7] Currently, there is 38 MW of solar PV capacity operating at Air Force bases in 24 states, enough to power more than 5,600 American homes. [8] A 16.4 MW project at Davis-Monthan, Ariz. became the Air Force’s largest operating solar project in February of 2014, and a six MW solar array at Otis Air National Guard Base, Mass. is expected to come online this year. [9,10] The Air Force has also outlined solar projects at military residences at Los Angeles Air Force Base and Schriever Air Force Base. All of these projects, both at the utility and distribution levels, are anticipated to provide the Air Force with millions of dollars in energy savings over the lifetimes of the systems.

Solar power will continue to be a vital piece of the Army, Navy and Air Force’s efforts to meet their renewables targets moving forward. More specifically, solar PV power accounts for 58 percent of the 1.9 GW (gigawatt) of identified DoD renewable energy capacity additions from 2012 to 2017. [11] That equates to approximately 1.1 GW of planned new PV projects, which is roughly equal to the amount of installed global solar capacity in the year 2000. 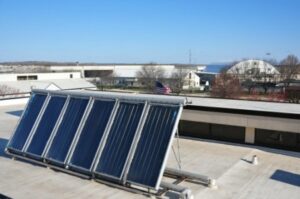 Of all the technologies under research for the practical use of photovoltaic solar cells, perovskite-based solar cells are the single most intensely investigated technology. Perovskites comprise a class of minerals, named after a Russian mineralogist (L.A. Perovski, 1792-1856), that are based on calcium titanate, CaTiO3. The terminology is loosely used these days to refer to any compound of ABX3 stoichiometry that exhibits the perovskite crystal structure. The perovskites that researchers are most excited about are the organometal trihalides, the most commonly studied of which is CH3NH3PbI3, where A = CH3NH3 (methylammonium), B = Pb (lead) and X = I (iodide). Other mixed halides such as CH3NH3Pb(I1-xClx)3 and CH3NH3Pb(I1-xBrx)3 have been studied as well. 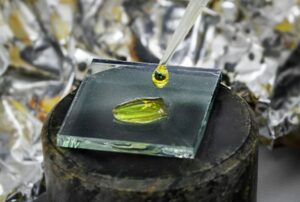 Researchers and research teams are attracted by the potential of perovskite solar cells to be both high-performing and inexpensive to manufacture. Since their first investigation in 2009 by Tsutomu Miyasaka in Yokohama, Japan, the solar efficiencies of perovskite cells have significantly improved from 3.8 percent to upwards of 16 percent in 2014 with most of these advances coming in the two year period of 2012-2014. [12,13] These notable improvements in the photo-conversion efficiencies over this short period, as well as their higher open-circuit voltage (1.1 V) versus silicon (0.6 V), have attracted world-wide attention. In addition, the ability of these materials to be solution-processed via liquid-phase chemical reactions and material coating/deposition by methods such as spraying, roll-to-roll printing and spin-coating make it possible for solar-cell manufacturers to eventually replace expensive clean rooms and sophisticated vapor-deposition equipment with simple, inexpensive benchtop processes. [14]

Moreover, target efficiencies of 20 percent have been identified as a feasible goal, which rivals that of currently available crystalline silicon (20-25 percent). [15] 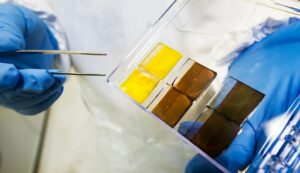 Figure 3. National Renewable Energy Laboratory (NREL) Senior Scientist Kai Zhu holds several perovskite cells he made in his lab using a precursor solution that converts from a liquid base to an absorber in a device. (Photo by Dennis Schroeder/Released)

In these trihalide perovskites, it was experimentally determined that the photo-excited electron-hole diffusion lengths are greater than one micrometer, a value that is about 10X the absorption depth.[16,17] This means that the charge carrier (electrons and holes) diffusion lengths in these solution-processed compounds are comparable to the optical absorption lengths, resulting in high photoconversion efficiencies. A low efficiency photovoltaic exhibits electron-hole diffusion lengths on the order of 10 nm. [17] This means that significant charge recombinations occur, which waste the converted energy as heat and reduce the overall efficiency of the solar cell. In addition, recent (2014) transient laser spectroscopy and impedance measurements of the photoinduced charge-transfer processes in a thin CH3NH3PbI3 perovskite film indicated ultrafast electron and hole injection rates taking place at the film interfaces on the order of femtoseconds (10-15 s) to picoseconds (10-12 s). [18,19] Vapor deposition of these materials has also demonstrated that nanostructuring is not necessary to achieve high (about 15 percent) conversion efficiencies. [20]

Figure 4 illustrates a thin film arrangement of a perovskite solar cell prepared by a spin-coating method over a thin, compact layer of porous titanium dioxide (TiO2). In this arrangement, sunlight passes through the glass substrate and transparent fluorine-doped tin oxide (FTO) conducting electrode through a thin, porous TiO2 layer onto a layer of photosensitive perovskite film (red) to stimulate the creation of electron-hole pairs (e-/h+) called excitons. These charged particles separate and diffuse to the two charge-conducting layers (TiO2, Spiro-OMeTAD) and opposing electrodes to generate a working voltage and current. Porous TiO2 is a conductor of electrons, while Spiro-OMeTAD [2,2’,7,7’-tetrakis-(N, N-di-4-methoxyphenylamino)-9,9’-spirobifluorene] is a solid polyaromatic ring compound that serves as a hole (positive charge) conductor.

Recently, a study showed that this synthetically-complex (and expensive) organic arylamine hole-conductor, Spiro-OMeTAD, can be eliminated by fabricating a perovskite solar cell that does not require a hole-conducting layer. [21] This was accomplished by using a double-layer of mesoporous TiO2 and ZrO2 as a scaffold infiltrated with perovskite material to produce a solar cell with a certified power conversion efficiency of 12.8 percent.

Studies on the analogous solution-processed lead bromide perovskites have yielded cells with higher open-circuit voltages of about 1.3 V, and these materials have been deposited on flexible polymer substrates. [22,23] A recent study has even deposited these materials on graphene/TiO2 composites [24] using solution-based deposition procedures at temperatures below 150 C to produce solar cells with efficiencies up to 15.6 percent.

However, perovskite materials do have some material disadvantages, which are:
1. Sensitivity to oxygen and water vapor, which may necessitate preparation under an inert atmosphere and encapsulation in a final module form
2. Difficulty in preparing large, continuous films
3. Toxic lead (Pb) in the most-used perovskite material (CH3NH3PbI3) may leach out of solar panels into the environment and presents a barrier to commercialization. Several recent attempts have been made to replace the lead with tin (Sn) in these perovskite materials. [25,26] Unfortunately, low photoconversion efficiencies (five to six percent) were observed and Sn (unlike Pb) has a strong tendency to convert to its more stable 4+ oxidation state, which is promoted by moisture (to yield SnO2, tin oxide), and degrade overall cell performance. Nonetheless, efforts are still underway to resolve these issues.
4. A phase transition from tetragonal to cubic at 55 C, which may impact the long-term stability of these materials
Lifetime studies must be done to evaluate this issue. [27]

With these issues in mind, these highly-efficient solar cells will continue to be evaluated and developed. The current overall consensus seems to be that most researchers are optimistic that perovskite solar cells will eventually find widespread application and may ultimately lead to devices that will rival today’s conventional silicon-based versions.

Dr. Richard Smardzewski is currently the Principal Scientist at SciTech Services, Inc. in Havre de Grace, MD and has been so since 2007. He was the former Deputy Director of Research & Technology at the U.S. Army Edgewood Chemical & Biological Center where he held several positions from 1986-2007. From 1972-86, he was a Supervisory Research Chemist at the Naval Research Laboratory in Washington, DC. He obtained his Ph.D. in Inorganic Chemistry from Iowa State University and his B.S. in Chemistry from King’s College. Over the course of his career he has authored/co-authored 109 research publications and one university textbook, presented over 100 technical papers at various scientific conferences and received a number of achievement awards.