There are emergencies we respond to that have relatively short duration with potentially high consequence. For example, tornadoes are over in minutes. A nuclear weapon burst would be over in seconds, and in a matter of hours its radioactive fallout plume would become a discrete and predictable event. A hurricane would subside in hours or days. By the time response teams arrive, the initial event is over. Accordingly, first responders begin lifesaving actions; planners scale the emergency, identify needed resources and create concepts for the follow-on life-sustaining and recovery efforts. In general, most emergencies can be thought of as discrete, non-continuous events; secondary hazards may linger—perhaps natural gas leaks from a tornado or fallout from a
nuclear burst – while the risk from the primary event has ended.

Not all emergencies, however, are single, discrete events. Some emergencies create a continuous hazard to our responders once they arrive on-scene. Consider an active shooter, an Ebola-like disease outbreak, floods or a “secondary device” improvised explosive device scenario in the epigraph are examples of ongoing events that require mitigation. Planners and responders must clearly
know and understand which kind of hazard they are addressing. Failing to correctly assess if an emergency is ongoing in certain situations, like the IED attack in Thailand, may result in a greater number of casualties.

Webster defines an aftershock as, “a minor shock following the main shock of an earthquake.” [2] This definition is dangerously misleading if applied to the New Madrid Seismic Zone. The NMSZ earthquake sequence last presented itself in 1811 as a long series of major (magnitude 7.0-7.9) and strong (magnitude 6.1-6.9) earthquakes. As illustrated by the enclosed timeline, the 1811-1812 New Madrid Sequence was a group of four (including the “dawn aftershock” on December 16) major earthquakes and many damaging aftershocks, spread out over an eight-week period. The aftershocks numbered at least four magnitude 6 events and at least five magnitude 5+ events; all of which would have the potential to cause additional damage, especially if there were buildings already damaged by the main shocks. From detailed eyewitness accounts found in journals, diaries and newspaper stories, there were hundreds of smaller earthquakes/events during this time. 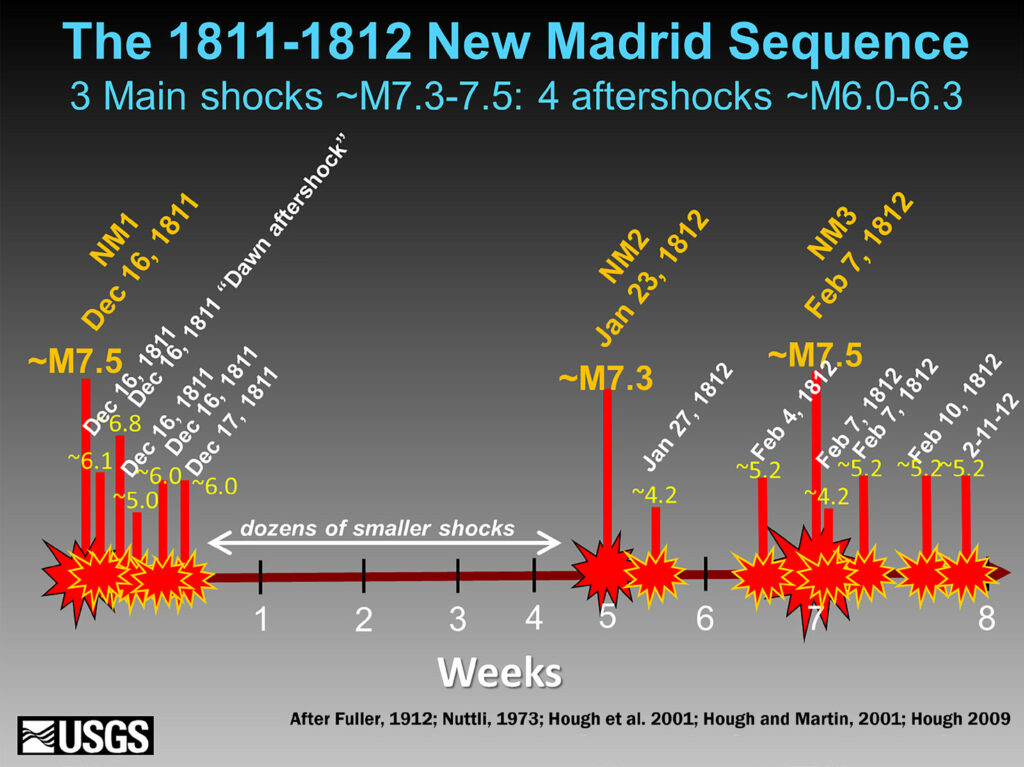 In total, Dr. Otto Nuttli, who was a prominent and respected seismologist at Saint Louis University, published work in the early 1970s in which he estimated that more than 200 moderate to large aftershocks struck the New Madrid region between Dec. 16, 1811, and March 15, 1812: 10 of these were greater than about magnitude 6.0; about one hundred were between M5.0 and 5.9; and 89 were in the magnitude 4 range. Nuttli also found that about 18 hundred earthquakes of about M3.0 to 4.0 during the same period. Geologists studying the New Madrid seismic zone after Nuttli’s work found that the geologic record contained convincing evidence of large pre-1811 earthquakes. We now know that over the past 3,000- 4,000 years, the New Madrid seismic zone has repeatedly produced sequences of major earthquakes that contained earthquakes similar in magnitude to the 1811-1812 events. [3]

The history of the NMSZ demands an “ongoing emergency” concept of response, with the same continuing hazard mindset as a “secondary device” IED attack.

Looking forward, the USGS and the Center for Earthquake Research and Information of the University of Memphis now estimate that there is a 7 to 10 percent probability of a repeat of the 1811–1812 earthquakes (magnitude 7.3 to 7.5) sometime over the next 50 years. The probability of a magnitude 6.0 or larger over the same period is much higher, at 25 to 40 percent. [4]

By studying the geological evidence and the hundreds of detailed personal accounts of people living near the Mississippi River… scientists have built an understanding of the timing and magnitude of the earthquakes occurring during the robust 1811-1812 sequence… Given this history of multiple large shocks… USGS, perhaps in coordination with the Federal Emergency Management Agency and regional State EMA’s, will likely issue a media advisory saying that there is a good chance of additional large main shocks and damaging aftershocks over the coming months. This announcement may cause thousands of people to leave the region seeking shelter outside the strong shaking zone. [3]

Exercises Do Not Reflect History Nor Predictions

Over the years, many exercises have focused on the NMSZ hazard. Unfortunately, participants have the impression that an NMSZ event will be much like that of a tornado, where the initial danger will be over within minutes and responders will be free to execute lifesaving and life sustaining operations and transition to recovery operations soon following. Perhaps there will be aftershocks, but they are not included in the response plans or the training scenarios.

In the scenario, the southwest segment of the NMSZ ruptured at a magnitude of 7.7 from near Marked Tree, Arkansas, to near Ridgley, Tennessee. The shaking from this event triggered a magnitude 6.0 event in the WVSZ near Mt. Carmel, Illinois. The earthquakes caused widespread casualties, displaced households and damaged major infrastructure across eight states — Alabama, Arkansas, Illinois, Indiana, Kentucky, Mississippi, Missouri and Tennessee. [5]

While there is little doubt that this represents a near-worst case initial earthquake, in order to support a four-day exercise, the earthquake sequence was scaled and therefore depicted as a single, discrete event. Geologic activity that took eight weeks to culminate in 1811-12 was compressed to an instant, with a stated goal to “respond to and stabilize areas impacted by a catastrophic earthquake within the initial 72 hours.” [5]

In response to this scenario, players implemented the following actions over the course of the exercise:

The need to employ all aspects of earthquake immediate response, stabilization and recovery within a four-day exercise overrode the need for a realistic NMSZ Sequence. If the 2011 NLE was overlaid on the historical 1811 timeline, the following actions may have been more indicative of the players’ actions over the exercise:

By compressing the “ongoing emergency” of a NMSZ earthquake, exercises like NLE 2011 have generally overlooked the hazards of conducting rescue operations in a seismically active area. As a result, training scenarios do not force local, state and federal disaster planners to experience having to “restart” and “reinitiate” immediate lifesaving recovery actions. There is no requirement to replace injured response teams, rotate fatigued response teams, replace damaged response equipment or re-assess infrastructure. Simple procedures, such as having engineers assess key bridge trafficability and safety, becomes problematic if 14 earthquakes with a magnitude 4.2 or above occur over eight weeks. Infrastructure reinforcement and repairs become impossible under these conditions.

Local, state and federal disaster planners are also not compelled to conduct lifesaving, life-sustaining and recovery operations all at the same time. By training, responders have prioritized lifesaving operations at the expense of the other aspects of recovery, but will lifesaving still supersede recovery and infrastructure repair if damaged pipelines prevent the flow of essential gasoline
or heating oil to the East Coast? Planners must practice and prepare to execute all missions simultaneously.

Liquefaction describes a process where a solid is turned into a liquid. In regard to earthquakes, liquefaction occurs when non-clay soils with a uniform particle size become saturated with water and are then subjected to a shock, such as an earthquake. These soils literally become a flowing liquid and lose their strength. The New Madrid area is notorious for liquefaction for two reasons; first, there is a large amount of sand buried just under the surface, and second, the water table is very high due to the close proximity of the Mississippi River. Liquefaction will primarily impact response operations by removing the underlying support from roads, rendering them unusable. Buildings can also fall victim to liquefaction, as their foundations become unsupported and unstable. Liquefaction also causes the infamous “sand blows” or “sand volcanoes”— liquefied sand jets out of the ground, sometimes producing sprays reaching tens of feet in the air and covering significant areas with sand.

Although the USGS has produced maps of both historical and projected liquefaction hazard areas, such as USGS Professional Paper 1336-B The New Madrid Earthquake: An Engineering Geologic Interpretation of Relic Liquefaction Events and Open-File Report 2011-1203 Liquefaction Hazard for the Region of Evansville, Indiana, liquefaction is usually not included in NMSZ exercises. [6]

When the NMSZ becomes active, regardless if it is with magnitude 6 earthquakes or several earthquakes exceeding magnitude 7, it will be one of America’s worst days. The warnings of scientists and experts as well as the lessons of history convey the risk is real and a comprehensive response must be planned. Rudimentary plans exist, and they have been exercised and rehearsed. Plans at all levels, however, must be reviewed to ensure they are coordinated to address an ongoing emergency rather than just a single, discrete event. 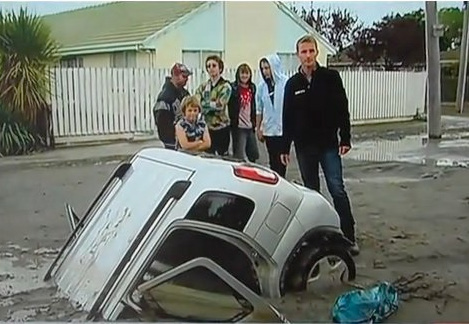 Figure 2: Liquefaction following the Christchurch Earthquake in New Zealand in 2011. While usually not directly hazardous to humans, liquefaction complicates transportation and can damage buildings and infrastructure. (Image courtesy of the Pacific Northwest Seismic Network/Released)

Figure 3: New Madrid’s Riverfront Park is sited on top of the New Madrid Levee (right), protecting the town from the Mississippi River. This levee, completed in 1927, is typical of infrastructure that would have to be inspected and possibly reinforced after each significant aftershock. (Photos by author/Released)

It will be one of the United States’ worst days when the NMSZ becomes active. It is certain that this day will come to pass. By looking at history and heading geological forecasts, we must ensure that our response to this enduring disaster is the best that we can devise. There is no reason for us to repeat the mistakes of the responders in Thailand, who missed the secondary device in their desire to save lives.