A decades-old electronics performance problem is re-emerging as the European Union enacted legislation removing the use of lead in electronics. In the 1940s, electronics were failing due to the formation of “tin whiskers,” which are filaments that can grow and cause interference and short-circuit failure. By 1950, researchers developed a tin-lead solder, which dramatically reduced the occurrence of tin whiskers. [1]

“At the onset of the electronics age, development of electrical devices, wires, and electrical components were joined using tin solder,” said Rusty Hallman of Mission Engineering at Y-12 National Security Complex. “Metallurgical properties of tin tend to be brittle, producing such high stresses within the grain of the metal so that small filamentous ‘whiskers’ are formed from select low-energy grains. These whiskers grow long enough to contact neighboring circuits, causing short-circuit failure. In high-voltage circuits, plasma fires and subsequent catastrophic failure occur.” [2]

As electronics become smaller, the tin whisker problem will grow. The potential for failure is a big military concern in communications and weapons systems. [3] These filaments can grow from several millimeters in length and have been seen up to 10 millimeters long. [1] These whiskers have been the cause of failure in medical devices, as well as satellite and weapons systems and power plants. [1]

The European Union enacted the Reduction of Hazardous Substances (RoHS) legislation, which is aimed in part at reducing the use of lead in electronics. But, with the removal of tin-lead solder, researchers are again seeing tin whiskers failures.

“The impact is significant. Manufacturers around the world have removed lead from solder in manufactured electronics. As a result of RoHS compliance, the tin-whisker problem and other pre-1950 performance problems associated with lead-free electronics have returned,” said Dennis Miller of Program Integration at Y12 National Security Complex. “We’re experiencing tin whiskering, poor ductility, poor shock and vibe tolerance, poor wetting of leads in manufacturing, and other problems.” [2]

The Center for Advanced Life Cycle Engineering at the University of Maryland warns that tin whiskers can “pose major safety, reliability and potential liability threats to all makers and users of high-reliability electronics and associated hardware.”

Y-12 National Security Complex has entered into a cooperative research and development agreement with Foresite, Inc. to tackle the re-occurring tin whisker problem. Y-12 researchers are using the magnetic properties of the tin solder to reshape the structure of the bonds while the solder is hardening. [2]

“Y-12’s approach to the problem is novel and counterintuitive, but scientifically sound,” Hallman said. “This new processing method of solidification within a magnetic field provides a fresh path to reproducibly create structures that lead to desirable material performance for lead-free electronic components and subsystems.” [2]

Researchers at the Savannah River National Laboratory are also working to alleviate the tin whiskers dilemma. Their approach uses gamma irradiation to change the growth mechanism and whisker shape but avoids changing the chemistry of the solder. [3]

Lockheed Martin is taking a different approach to solving the tin whisker dilemma and is studying the use of copper for solder material. [5] Copper is 100 times more expensive than its silver counterpart, but Lockheed Martin says its applications extend from commercial use to wearable electronics and spacecraft. [5] 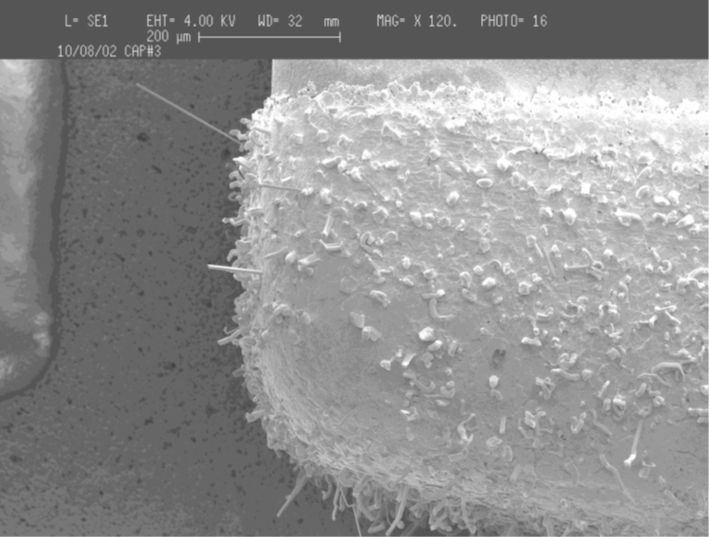