If the nuclear industry is to live up to its immense potential and thrive in a post-Fukushima, post 9/11 world in which public concerns about safety and security are high and the cost of alternative energies is either low (natural gas) or rapidly decreasing (renewables), new plants must satisfy the following requirements:

A new concept for an Offshore Floating Nuclear Plant (OFNP) could transform the nuclear industry.

Researchers with the Massachusetts Institute of Technology Nuclear Science and Engineering Department are developing the OFNP concept, which could provide attractive economics and unprecedented levels of safety. The concept combines state-of-the-art Light Water Reactors, which use normal water as both the coolant and moderator, and floating platforms similar to the rigs used in offshore oil/gas operations. By placing the plant in the ocean, it has unlimited access to emergency cooling water, which would prevent a core meltdown. A reliable global supply chain exists for both technologies; therefore, massive expansion in the use of nuclear energy becomes possible on a time scale consistent with combating climate change in the near future. The OFNP is a plant that can be entirely built on a floating rig in a shipyard, towed to the site where it is anchored within territorial waters (less than 12 nautical miles off the coast) and connected to the grid via an underwater AC transmission line. The crews operate in monthly or semi-monthly shifts with onboard living quarters, like on oil/gas platforms.

The team is developing two designs in parallel, to be used in different markets: the OFNP-300 and OFNP-1100, designated according to their electric power rating. In both cases, the floating structure chosen to house the nuclear plant is a cylindrical hull-type platform that shares many of its characteristics with platforms used in the offshore oil and gas drilling industry. [See Figure 1] Cylindrical hull platforms offer substantial stability gains at the scale the OFNP is designed for. [1-4] The hydrostatic and hydrodynamic behavior of a cylindrical hull can also be tuned with an added steel skirt. The skirt is sized to enable the cylindrical hull to rise up and down vertically while maintaining hydrostatic stability, and lower its draft to better allow for transportation on a heavy lift ship. The cylindrical hull also offers the best protection to the reactor itself when compared to other offshore platform designs, such as semi-submersibles or floating barges. Locating the reactor in a center annulus offers substantial protection on all sides via multiple hulls. Additionally, the cylindrical hull design enables the reactor and containment to be located at an elevation below the waterline, which enhances physical protection from plane crashes and collisions with ships, while also making it easier to access the ocean heat sink. 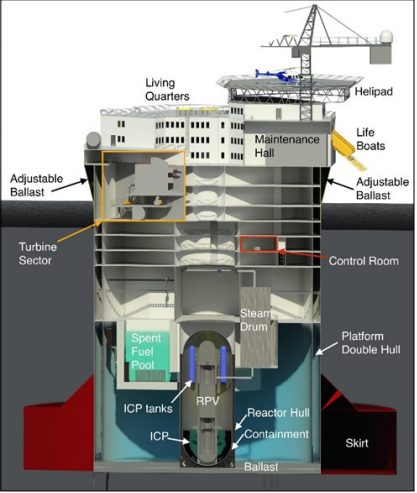 Figure 1: Shows the Offshore Floating Nuclear Plant-300, a concept developed by researchers with the Massachusetts Institute of Technology Nuclear Science and Engineering Department, which could transform the nuclear industry.

The development of the OFNP is one potential opportunity to advance both military and civilian operations. The Department of Defense (DoD) has enormous motivation on finding new energy-saving innovations, since its operations account for approximately 80 percent of all Federal energy consumption. Currently, DoD utilizes nuclear reactors to power submarines and aircraft carriers, which increase their speed and range. For example, the Virginia class submarines can achieve a speed of greater than 35 knots and do not need to refuel for their service lifetime. OFNP could be used to power the needs of large overseas DoD bases, such as Guam, which currently rely on oil and diesel fuel with high cost and complex logistics.

Because of its offshore, floating, platform-based, passively-safe design, the OFNP concept differs from other marine-based reactor concepts such as the Russian floating reactor [5,6], which is an icebreaker reactor mounted on a barge and docked on the coast; the French FlexBlue concept [7,8], which is a small, remotely-operated, submarine reactor sitting on or near the seabed; the old Westinghouse Atlantic Generating Station [9], essentially a large terrestrial PWR built on a barge and moored in shallow waters with a huge breakwater; and the Korean offshore nuclear power plant concept [10], a standard APR1400 plant built on a so-called gravity platform supported by the ocean floor. The economic potential of the OFNP compares positively also to non-nuclear offshore power plant concepts, thanks to its relative compactness and high power output.