The internet of things (IoT) is a growing network of billions of connected devices. In 2015, approximately 15.4 billion devices were part of the IoT, and current research indicates 30.7 billion devices partaking in the network by 2020 [1]. The IoT is now part of the every day, integrated into homes by way of cameras and door locks and into infrastructure through Cyber-Physical Systems (CPS),
such as the smart grid and the Internet of Battlefield Things (IoBT). The IoT provides the framework for internet-connected CPS, which are closely integrated, context-aware, mission-critical systems that perform actions and interact with the physical world (see Figure 1) [2-4]. CPS are evolving and expanding with many applications still in research and development stages. 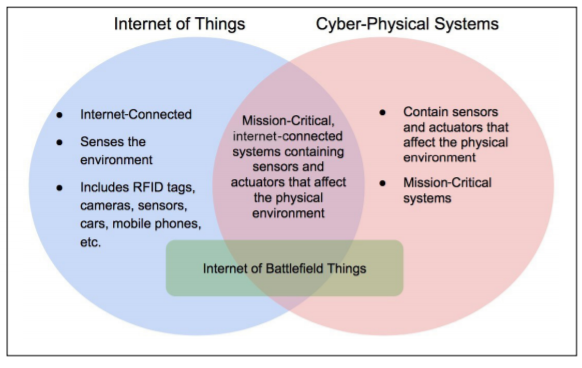 Smart systems (platforms such as CPS that incorporate IoT) have become an important component of infrastructure, particularly those aspects regulated, maintained, and utilized by federal agencies. The adoption of the IoT within the federal government has been largely driven by the Department of Defense (DoD), the Department of Homeland Security, and the National Aeronautics and Space Administration [5]. The expansion of smart systems has affected operations within DoD so much that the Defense Information Systems Agency, which is essentially DoD’s information technology combat support agency, has acknowledged the urgent need to keep demands related to this shift at the forefront of defense architecture [6]. In general, the impact of the IoT has garnered the attention of DoD leadership prompting the release of policy recommendations for the IoT in 2016 [7]. As smart systems, particularly CPS, become more widespread, it is necessary to adopt a standard framework for their integration into existing aspects of infrastructure [8]. When considering the implementation of IoT/CPS into infrastructure, security is a primary concern.

Many cyber security challenges exist for the IoT, CPS, and IoBT. Networking of these devices is accomplished via multiple protocols, such as radio-frequency identification, Wi-Fi, and Bluetooth – among others. Furthermore, the devices composing the IoT/CPS incorporate a variety of hardware
specifications and chipsets. Proper implementation of standard security measures is made more difficult by the inherent abundance of factors that must be considered within a network composed primarily of IoT/ CPS devices.

Additionally, the mobility of IoT/CPS devices raises a unique set of security concerns. Devices not bound to fixed locations (whose distance between other devices and access points is not constant) will have variable connectivity. Additional security concerns that must be accounted for include lost data packets
and unattended devices that may become compromised. In systems composed of distributed devices, communication between the devices is pivotal for facilitating the proper function of the system. A lack
of resiliency is an inability to identify and adapt to the presence of nodes within the system that exhibit weak or outright negative performance, which can cripple the utility provided by the system. Finally, the resource constraints that IoT/ CPS devices face must be taken into consideration. Redundancy and encryption would at least mitigate, and could solve, some of the aforementioned problems, but the devices within these systems must be strategic in the functions on which they choose to expend energy. Thus, it is critically important for less resource-heavy security methods to be strategically evaluated and implemented.

Trust management systems (TMS) are used to establish trust between two entities and are used in many areas of computing including peer-to-peer networks [9,10], wireless sensor networks [11,12], and, more recently, IoT systems [13-15]. The TMS must be adaptable for a wide range of scenarios and applications.
Trust propagation is the method in which peers propagate evidence to one another in a centralized or distributed fashion. In the proposed approach, trust propagation will occur in a hybrid fashion wherein devices propagate information to each other as well as a central trust data store when they are able. The centralized data store enables devices to move throughout the system while maintaining a certain level
of trust. This can keep a malicious device from corrupting one part of the system, being blacklisted from that section, and moving to a new section to cause corruptions. The central data store would provide the information allowing that section of the system to know the device is blacklisted. Distributed trust management is ideal for the IoT and allows the system to compute scores for only small subsets of known neighbors, which are devices within direct communication based on being within one hop of communication. The calculation of the trust scores is accomplished through trust aggregation (the method by which the data will be aggregated for trust score calculations) by fuzzy sets, game theory, and Bayesian analysis [16,17]. Fuzzy logic uses if-then rule sets to solve the trust problem and provide a multi-logic value [17]. Bayesian trust models use Bayes’ theorem as a foundation for aggregation and have been widely used and implemented over the last decade. They are studied in wireless sensor networks, peer-to-peer networks applications, and IoT systems [17-20]. Game theory models compute a trust score using minimal resources, which is an advantage in limited-resource devices, such as IoT edge
devices [21]. Unlike Bayesian trust models and fuzzy logic trust models, game theory models don’t predict what will occur. Instead, they mathematically estimate the behavior of the participants [17].

The same can be done for indirect observation OI as they are propagated. This is used when calculating the probability of success for a device’s reputation through data aggregation.

To aggregate the data to calculate a trust score, a dual approach with Bayesian and game theory is advantageous. Game theory provides a lightweight method for edge devices to determine trust through a trust matrix, whereas Bayesian analysis provides a more in-depth trust score calculation that can occur in a gateway and be propagated to the edge device when necessary. Bayesian analysis attempts to predict the probability of a device performing a desired action given the device’s previous actions. The previous actions are both the direct and indirect observations that are propagated through firsthand experience and by the neighbors. The probability that a device D will successfully complete tasks is calculated using Bayes Theory such that

Given this, the probability of D is all observations of the data such that

To generalize, the trust score TS for device n is

Figure 2 illustrates the lifecycle events of TMS for a device. It shows a device D1 entering into a new system and connecting to a gateway. D1 can be either an edge device or gateway device entering the system. The following steps occur for D1 as the device learns about neighboring devices and maintains status within the system. 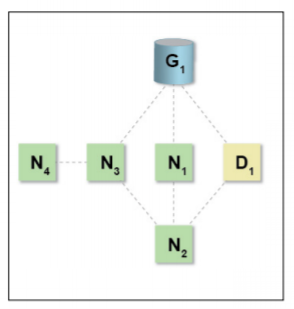 This system provides a mechanism for monitoring devices while they are in use. Through this implementation, misbehaving devices may be detected, both malicious and faulty, and alert the system administrator of the problem.

As IoT/CPS systems become more prevalent, they are also beginning to have an impact on the battlefield – referred to as the IoBT [22]. Figure 1 shows the attributes and intersection of IoT and CPS and how the
IoBT incorporates qualities from both. The IoBT is the collection of devices that can be attached to vehicles or worn by soldiers in the battlefield, such as drones, sensors, and cameras. These devices must maintain secure communication in order to effectively work. If the devices are continuously moving throughout the system, it’s imperative they maintain authentication into the system and continuous correct functionality.

Implementation of a TMS would enable these devices to maintain a trust score as they are used in the system. To accommodate mobility (and in some cases the transient nature) of these devices, a central data store can provide the means for a device to maintain its trust as it moves around. This provides a framework to keep malfunctioning and malicious devices from corrupting the entire system. If a device is blacklisted in one section of the system, it can’t move to a new section to cause corruptions because the trust score propagates. The TMS provides a reliable means of monitoring devices as well
as activity associated with these IoBT-enabled devices used by warfighters moving throughout the system. Earlier this year, the U.S. Army Research Laboratory established a Collaborative Research Alliance to address challenges in IoBT including heterogeneity, connectivity, scalability, and interdependence of networked elements [23]. Another major area of research in CPS is the smart grid. The smart grid is the use of cutting-edge technologies, equipment, and operations to make the delivery of electricity more reliable and efficient [24] than legacy systems. The Department of Energy defines seven key requirements for a smart grid: self-healing, motivates and includes the consumer, resists attacks, provides power quality, accommodates generation and storage options, enables markets, and optimizes assets for efficient operation [25,26]. The goal of the smart grid is to provide an infrastructure capable of handling distributed generation, renewable energy sources, electric vehicles, and demand-side management electricity [25]. As these technologies work together to control the delivery of electricity, it’s imperative they maintain acceptable performance. A TMS can be used to evaluate whether each device in the system is reliable for performing its designated task. Furthermore, a TMS can
revoke privileges to any device that becomes unreliable or faulty. The aforementioned TMS incorporates both dimensions of faultiness and potential cyber threat.

IoT and CPS are quickly becoming integrated into civil infrastructure and the battlefield. ATMS provides a key mechanism for establishing, maintaining, and revoking trust of devices within IoT/CPS systems. This provides a foundation to establish a more secure and resilient system by blacklisting devices not
performing desired actions. It is imperative that such functionality exist in the context of highly mobile devices that would otherwise be capable of compromising multiple parts of a system. On-going research is needed to continue development of TMS for IoT/CPS with the aim of strengthening the speed at which
misbehaving devices are detected and improving the ability to identify malicious versus
faulty devices.

26. National Energy Technology Laboratory. (2007). A systems view of the modern grid (Rep. for the U.S. Department of Energy Office of Electricity Delivery and Energy Reliability).