The individual warfighter now carries more than 100 pounds during combat operations, with a significant amount of that weight attributed to electronic gear and energy needed to power it. [1] In a 2011 memo issued to all U.S. Forces in Afghanistan, General David Petraeus stated, “Energy is the lifeblood of our warfighting capabilities.” [2] Power generation is such an important part of the contemporary warfighter experience that it is key in several initiatives, including Reliance 21, in which energy and power technology is represented as one of 17 communities of research emphasized as part of a larger effort to improve the strategic development of DoD’s science and technology planning.

For land-based warriors, power is required for multiple systems, and reliability is important, especially during missions where maintenance is not possible. [3] Unfortunately, power requirements for sensors, compact communications equipment and light sources have not shrunk as fast as device size and weight. [4] In order to tackle this challenge, alternative forms of energy are proving to be reasonable solutions.

The design of a thermocell is relatively simple (See Figure 1). Electrodes at either end are held at different temperatures. Typically, platinum is used as an electrode material due to its high catalytic activity. [6] Thermocells are filled with a redox electrolyte, which can be an aqueous solution, a non-aqueous solution or a solid-state membrane. [7] Ferri/ferrocyanide is commonly used in order to get high exchange current densities. [6] The movement of electrons between the temperature gradient of the electrodes creates a voltage potential. As long as the temperature difference persists, a steady state is maintained. [7] 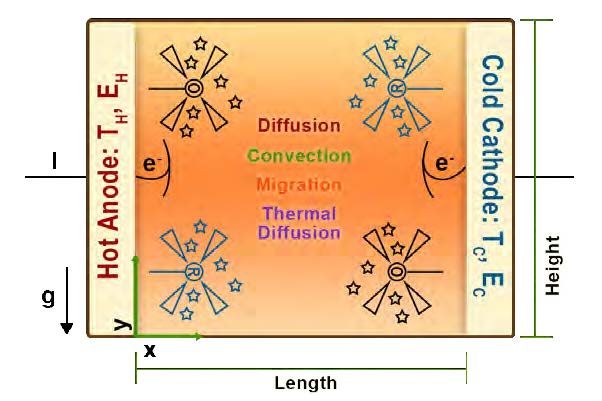 Using flexible materials, such as multi-walled carbon nanotubes, in the electrodes can allow the cells to be molded into a n y s h a p e , which eliminates extra equipment needed to transfer the w a s t e h e a t to the thermocell. [7] Carbon nanotubes have exceptional electronic, mechanical and chemical properties, which make them ideal for use in many electrochemical applications, particularly due to fast kinetics and a large, accessible internal surface area. [5] Recent research utilizing thermocells with MWCNT electrodes and the traditional ferri/ferrocyanide electrolyte demonstrated an efficiency three times higher than conventional thermocell devices with platinum electrodes. [5] In addition, thermocells using MWCNT electrodes have a relative power conversion efficiency that is 50 percent higher than platinum-based electrode thermocells. [6]

Aside from exploring new electrode materials, the use of ionic liquids, such as ethylammonium nitrate, as electrolytes has been investigated as a replacement for ferri/ferrocyanide. Thermocells based on ionic liquids can be highly flexible and would allow placement directly onto human skin, taking greater advantage of waste heat produced by the human body to further enhance the temperature gradient needed to maintain electrical activity from the thermocell. [8]

Betavoltaic batteries, sometimes referred to as betavoltaic cells or just betavoltaics, are a type of nuclear battery that convert the kinetic energy from radioactive decay of a beta-emitting radioisotope into electrical energy through the use of a semiconductor or junction device. [9] The key component in a betavoltaic power source is a beta-emitting material. [10] Beta radiation is essentially a high-energy electron released from an unstable nucleus. Betavoltaic batteries are durable power sources, which can be designed at small sizes because their energy density is 100 to 10,000 times higher than standard chemical batteries where miniaturization is limited by their low energy density. [9,11] Apart from their smaller sizes, betavoltaics can last anywhere from 15 to 100 years and have anti-jamming capabilities, [4,9] making them extremely useful for applications in military equipment and sensor networks that must operate in remote environments such as arctic and mountainous regions. [9,12,13,14] Because of their long lifetime, high energy density and ruggedness, betavoltaics are an excellent option for applications where photovoltaics are not viable power. [9]

Apart from the half-life, another key consideration is what effect(s) any radiation damage may have on the semiconductor devices. [10] Isotopes with long half-lives are more desirable then isotopes with shorter ones, and isotopes with a single crystal material have been typically preferred to minimize the loss of current. [10] In order to increase power output, radioisotopes with high specific power should be used, [9] and they should have a maximum beta particle energy. [10] A list of beta-emitting isotopes that have been explored for battery use is available in Table 1. 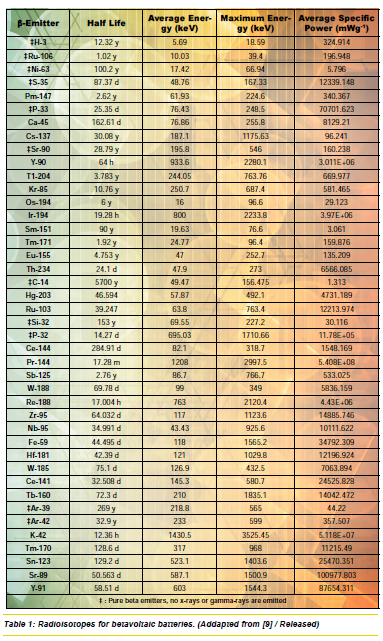 Tritium and Krypton-85 are among the most commonly used beta sources because they are widely available. [10] In fact, tritium is used commercially in night-vision gear. [4] Promethium is another betavoltaic material that was once considered for commercial use particularly in medical devices and military applications. [10] Betacel Model 400, using Pm-147 fueled betavoltaic batteries, was tested for pacemakers by U.S. and German companies. [10] Although Pm-147 was very promising, it was overshadowed by the lithium battery, developed around same time. Lithium batteries only last about 7 years, compared with the 10 years or more of betavoltaics, but since lithium batteries are non-nuclear, they were more preferred for commercial civilian use. [10]

Converting the energy from the radioactive decay into electricity is another very important part of betavoltaic, making the semiconducting material just as important as the beta-emitter. The use of silicon combined with radioisotopes has been well-studied since silicon is widely used in integrated circuits and in microelectromechanical systems, is easy to manufacture and has a relatively low cost compared with other semiconductors. [9] Betavoltaics with silicon diodes irradiated with Ni-63 layer show high efficiency. [15] In addition, non-crystalline betavoltaic structures using hydrogenated amorphous silicon have been used. [9] Hydrogenated amorphous silicon has a band gap of 3.3 eV making it an effective candidate for use in betavoltaics. [9]

One method for reducing the need for large batteries as power sources has been to convert kinetic energy from motion and vibration into electricity to power wireless sensors and ultra-low power microelectronics devices. [16,17] Harvesting kinetic energy requires a transduction mechanism to convert the energy from movement into electrical energy, [18] and electromagnetic transduction is an effective method for energy scavenging applications. [19,17] A simple design used to produce electromagnetic induction includes the use of permanent magnets, a coil and a resonating cantilever beam, [18] although several variations exist (See Table 2). 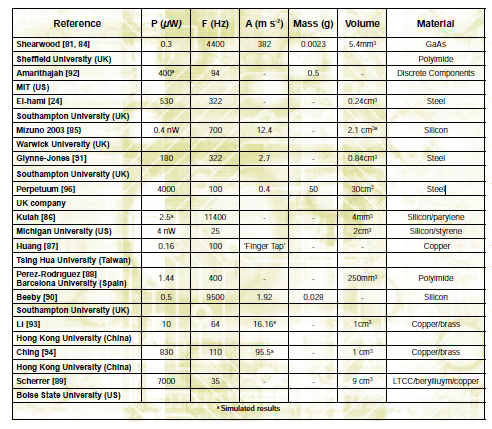 Electromagnetic generators employ electromagnetic induction from relative motion between a magnetic flux gradient and a conductor. [18] As the cantilever moves between the magnets, an electromagnetic field evolves leading to the generation of an electrical current. These systems have been used in a range of technologies, including remote sensors, wearable devices and mobile electronics. [20] While generating electricity through electromagnetic transduction can be a practical and effective means of powering electronic devices, more research is needed especially regarding applications in harsh environments due to inconclusive evidence of the reliability of the device’s moving parts compared with more stationary methods of generating power.

The use of betavoltaics, thermocells and electromagnetic generators were initially not feasible since the power demands of devices and systems grew at an exponential rate and the power capacity of these technologies were too small to handle a growth in demand. Ironically, as power demands increase, it may become more practical to explore utilizing these technologies as a means to power small devices and sensors individually rather than continuing to develop methods of powering entire systems. Although these technologies are over 100 years old, a resurgence in their interest for meeting energy demands of high-power networks may prove effective for military applications in rugged and harsh environments.