With the global population approaching 8 billion by 2020, how societies handle their waste is an important measure of economic development with implications for national security. [1] According to the Institute for Energy Research, global energy consumption is expected to increase by 30 percent by 2020 with corresponding increases in by-products and waste generation. The generation of energy from fossil fuels, including recently discovered shale oil deposits, is fueled by the power sector. Electrical power generation from natural gas results in molybdenum rich waste streams that must be considered. Global coal utilization is also projected to increase resulting in a significant increase in coal ash, which possesses high levels of uranium (U), thorium (Th) and other heavy elements that require isolation and immobilization. [2] The civilian nuclear industry generates waste including spent nuclear fuel. In addition, legacy waste from national defense activities is currently being immobilized in glass vitrification facilities at the Savannah River Site in South Carolina and the Hanford Site in Washington State.

Storing and disposing of radioactive waste is a complex issue for the U.S. government and military from environmental and nonproliferation standpoints.

Currently, commercial spent fuel is stored on site in wet storage or dry cask storage facilities. The technology exists to reprocess the 96 percent of the remaining uranium in spent nuclear fuel for further use, however the resulting waste streams must be considered. [3] The ultimate composition of the streams depends on separation process used, but commonly have components of cesium and strontium streams, lanthanide streams, minor actinides and transition metals. Options to store this waste include encapsulation in glass or vitrification, crystalline ceramics, or some combination of the two approaches. [4] The resulting composite consisting of waste and host matrix is termed a waste form. Ceramics are a materials class defined by primarily ionic and covalent bonding with structural variations ranging from fully ordered crystalline (referred to as crystalline ceramics), to disordered amorphous (referred to as glass).

Glasses and ceramics have also been considered as candidates to make proliferation resistant materials for immobilization of excess grade weapons plutonium. In addition, re-processing of spent nuclear fuel represents a scenario for the diversion of actinide materials. Actinides could be recycled for re-use in nuclear processes. Nonproliferation, and thereby security of nuclear waste, is an important issue for the military.

Immobilization of actinide materials in ceramic waste forms is one strategy to reduce the threat of nuclear proliferation. Ultimately the waste form will be placed inside a metal canister, which will undergo storage in a geologic repository. The waste form can be considered a source term for transport of radionuclides into the environment; the goal of international waste form efforts is to design materials with low release rates over geologic time scales. The focus of this article will be to review technologies based on crystalline ceramics for the immobilization of waste streams resulting from potential commercial fuel reprocessing.

Current research efforts are aimed at making the nuclear fuel cycle more effective by the development of next generation waste management technologies. One envisioned fuel-reprocessing technology would separate the fuel into several fractions, thus, partitioning the waste into groups with common chemistry. Ceramic (or crystalline) waste forms incorporate the radionuclides in the waste as part of the crystal structure. Tailoring of a ceramic waste form is based on the knowledge that there are many naturally produced minerals containing radioactive and non-radioactive species very similar to the radionuclides of concern in wastes from fuel reprocessing. For instance, there are 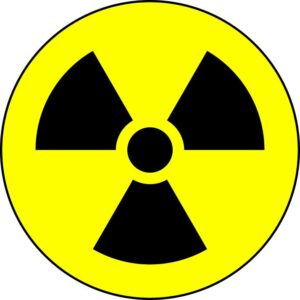 minerals, or simply “rocks” which are natural analogues of the hollandite structure found in the Apuan Alps in Tuscany, Italy. A hollandite-type crystal structures appears to be a good candidates for the immobilization of common fission products such as cesium (Cs). [5] Similarly, in geologic rock formations, the material zirconolite has been found which is an attractive crystal structure for the immobilization of minor actinides. [6] Finally, perovskite and pyrochlore structures are attractive for the incorporation of lanthanide series elements and have known natural analogues found in geologic rock formations. [7]

Once the structures of interest are found by examining those commonly found in nature, the goal is to synthetically make these minerals in the laboratory. In principle, the crystalline systems should be similar to those found in nature which are more thermodynamiclly stable compared to conventional amorphous or glass materials. A family of materials based on titanate ceramics have been thoroughly studied for use in immobilizing nuclear wastes (e.g., the synthetic rock, or Synroc, family) due to their natural resistance to leaching in water. Assemblages of several titanate phases have been successfully demonstrated to incorporate radioactive waste elements, and the multiphase nature of these materials allows them to accommodate variation in the waste composition.

Once the crystal structures have been achieved in the laboratory, the next step is to densify or compact the material to reduce the volume and eliminate porosity. While these materials are typically densified via hot isostatic pressing, recent work has shown that they can also be produced from a melt. For example, demonstrations have been completed using the Cold Crucible Induction Melter technology to produce several crystalline ceramic waste forms, including murataite-rich ceramics, zirconolite/pyrochlore ceramics, Synroc-C (zirconolite, hollandite, perovskite), aluminotitanate ceramics, and zirconia. [8,9] This production route is advantageous since melters are already in use for defense waste vitrification in several countries, and melter technology greatly reduces the potential for airborne contamination as compared to powder handling operations associated with hot isostatic pressing.

An example of one projected waste stream’s composition for immobilization is given in Table 1. The cesium, strontium and lanthanide, CS/LN, composition is the result of a combination of the Cs/Sr separated stream and the Trivalent Actinide—Lanthanide Separation by Phosphorous reagent Extraction from Aqueous Komplexes, TALSPEAK, waste stream consisting of lanthanide fission products. The waste from these distinct separation steps are mixed together in the final stage resulting in a combined waste stream that requires immobilization.

Ceramic host systems for this study were selected based on the objectives of forming durable phases based on natural analogues described above, using a minimum of additives to form the desired phases (i.e., achieving high waste loadings). Many of the elements in the waste stream are known to react with select additives to form stable crystalline phases of the types perovskite, pyrochlore, hollandite and zirconolite. Elements with a +3 valance such as the most prevalent lanthanide in the waste stream, Nd+3, readily form ABO3 perovskite and related pyrochlore structures with titanium resulting in NdTiO3 and Nd2Ti2O7 type phases, respectively. [10,11] The Cs and Rb elements in the waste are known to partition to a hollandite structure with the formula of (BaxCsy)(M, Ti)8O16 with M=Al+3, Mn+3, Fe+3, Ga+3, Cr+3, Sc+3, Mg+2 containing mixtures of divalent and trivalent cations. [12] A CaZrTi2O7 zirconolite crystalline phase has been demonstrated to incorporate the Zr transition metal waste element and minor actinide species resulting from inherent inefficiencies in the separation processes.[13]

Commonly available additives such as Al2O3, BaO, CaO, TiO2, and Fe2O3 are used to tailor waste forms based on the waste streams listed Table 1. The choice of additives and targeted waste form compositions are calculated to form the desired phases:

Different multiphase compositions were prepared in this manner with ~25 weight percent waste loading and varying concentrations of CaO, Al2O3, BaO, Cr2O3, Fe2O3 and TiO2 additives. The microstructures of select samples are presented in Figure 1 along with Table 2 indicating the elemental composition and crystalline phases observed.

There have been several comparative studies of crystalline ceramic waste forms produced by hot pressing and inductive melting. [14,15] These prior studies have indicated that the specimens in general exhibited similar mineral compositions. In addition, there was particular interest regarding differences in phase formation, elemental partitioning and microstructural variation as a function of waste form composition and processing conditions. In recent studies, common microstructural differences observed between samples processed by a melt and crystallization route and solid-state sintering routes include an order of magnitude increase in grain size with melted ceramics along with an increase in porosity. [9,16]

While these materials have been successfully synthesized from a variety of fabrication methods, a greater understanding of the elemental partitioning, microstructural features, and connectivity of the phases and corrosion behavior as a function of processing variations is needed. Current work aims to systematically fabricate and characterize multi-phase waste form compositions with varied microstructures followed by advanced 3D characterization of their interconnected network, including residual porosity. Material system modeling will incorporate elemental release and the interconnected microstructural network of phases to better understand the material systems’ performance and degradation. In order to address this need of advanced characterization, we are currently interrogating the 3D structure of multi-phase ceramic waste forms using Focused Ion Beam-Scanning Electron Microscopy techniques and full-field, x-ray computed tomography performed on synchrotron-based transmission x-ray microscopes. [17,18] The use of high-brilliance synchrotron sources permits the use of a tunable, monochromatic beam to perform imaging with elemental and chemical bonding sensitivity. The incident beam can be tuned to just below and above a characteristic absorption edge for one of a material’s constituent elements, producing contrast in the resultant images as data are collected at either side of the absorption edge. Contrast appears wherever that constituent element is present in the sample, and the magnitude of the contrast is dependent on the prevalence of that element. Such a procedure can be repeated in succession for multiple elements within the sample, thus creating an imaging capability with elemental sensitivity. 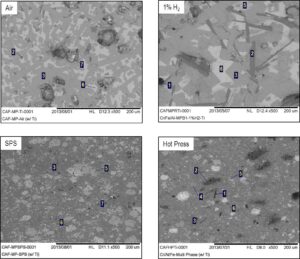 Crystalline ceramics are a promising strategy for the immobilization of nuclear waste. These materials have been successfully fabricated with a range of waste elements and under a wide variety of processing conditions. Differences in microstructure and elemental partitions have been observed with different processing methods. For instance, melt-processed samples displayed a high degree of substitution and variation of composition within grains was observed along with large (10-200 micron), irregularly shaped grains along with large voids. The impact of processing induced microstructural differences on the long term durability of these material systems requires additional attention. Currently, advanced 3D characterization of the interconnected network using electron microscopy and synchrotron X-ray techniques, including residual porosity is underway. Material system modeling that can incorporate elemental release and the interconnected microstructural network of phases to better understand the material systems’ performance and degradation is also a need that is being addressed.

Kyle Brinkman is an Associate Professor in the Department of Materials Science and Engineering at Clemson University. Kyle has authored or co-authored over 70 peer-reviewed technical publications and government reports. He was the recipient of the TMS Young Leaders International Scholar Award in 2015, the Clemson University College of Engineering and Science Outstanding Young Alumni Award in 2015, the DOE-NE Fuel Cycle Research and Development Early Career Researcher Award in 2013, and the SRNL Laboratory Director’s Early Career Exceptional Achievement Award in 2011. Kyle’s current research is in the area of energy materials including ceramic materials for electrochemical gas separation and processing, structure/property relations in solid oxide fuel cell systems, and radiation tolerant crystalline ceramics for applications in nuclear energy.