Photo illustration created by HDIAC and adapted from U.S. Air Force photo by Staff Sgt. Armando A. Schwier-Morales (Available for viewing at: https://www.ramstein.af.mil/News/Article-Display/Article/726360/airmen-soldiers-survey-terrain-for-rock-proof-v/) and Adobe Stock.

Lightweight batteries are highly consequential to a wide range of Department of Defense (DoD) applications, including the use of unmanned aerial systems (UAS), wearable devices, and light combat vehicles. Additionally, the use of increasingly sophisticated equipment has caused DoD power requirements on the battlefield to rise substantially in recent years (see Figure 1). For example, a typical Army platoon in Afghanistan in 2001 required just 2.07 kilowatts per hour to power their devices. That requirement now stands at 31.35 kilowatts per hour [1–3]. Technologies
that enable the production of higher-capacity batteries at the same weight (or lower) will bolster warfighter mobility and readiness.

Although several high-energy materials have been discovered in recent years, the batteries used today in everyday applications are made of materials mastered several decades ago [4]. This is due to the fact that most novel battery materials suffer from serious reliability issues: namely, the large volume change that occurs during battery charge/discharge cycles [5].

Additional efforts have concentrated on improving the electrolytes, the electrolyte-electrode interface [6], and advancing the technologies behind Li-metal batteries and Li-air batteries [7]. However, none of these improvements are currently available for practical application.

One of the most promising routes for increasing battery capacity is the geometric optimization of internal electrode structures. In conventional modern battery technology, electrode particles are mixed with binders and pressed into laminated structures. Such simple electrodes typically leave about 30– 50 percent of the volume unutilized due to limitations in the diffusive process.

A 3D electrode, on the other hand, can permit the facile transport of ions via short diffusion path and enhanced interfacial area. Furthermore, creating a controlled porosity inside the 3D electrodes allows the electrolyte to deeply penetrate the electrode volume, leading to a very high volume utilization. This, in turn, is expected to eliminate unutilized electrode volume and reduce battery weight. To date, the major hurdle in achieving this new concept has been the fact that current 3D printing techniques are mostly limited to extrusion-based methods, which only allow
interdigitated geometries [8], sometimes referred to as 2.5D structures (multiple stacked 2D layers). Note that the interdigitated geometries cannot endure load effectively and are not useful as structural materials. Therefore, with conventional 3D extrusion-based printing technology, it is impossible to realize a truly 3D structure with controlled porosity throughout the entire electrode volume.

In this article, we introduce a new concept in 3D printing technology that allows the production of battery electrodes that are lightweight, high-capacity, and display superior mechanical properties. The electrodes have a 3D lattice architecture and a controlled hierarchical porosity distribution over their entire volume. The new printing method leads to a near-full utilization of the electrode material. The technology will lead to a 50 percent (or greater) increase in specific capacity for batteries, effecting a proportional decrease in their weight. In addition, the electrodes can support a significant amount of load while storing the electrochemical energy. This addresses another attribute of batteries with potential implications for military applications: our proposed battery can be integrated into/with structural components, such as UAS wings. These superior properties may be achieved by leveraging the expertise from two complementary areas of advanced manufacturing research and development (Carnegie Mellon University) and battery design and analysis (Missouri University of Science and Technology). 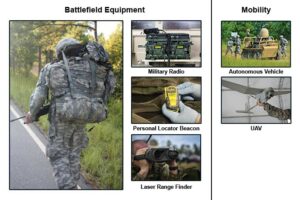 The 3D electrodes were fabricated using an aerosol jet-based (AJ) 3D printing method, which allows for the deposition of nanoparticles dispersed in a solvent (i.e., the nanoparticle ink) onto a substrate by creating a mist of particles guided by a carrier gas. The AJ printing system includes two atomizers (ultrasonic and pneumatic), a programmable XY motion stage, and a deposition head. Figure 2(A) depicts the printing process. The platen on which the electrode was built was heated to 110 degrees Celsius, which helped dry the mass of nanoparticles (diameter of about 20 μm in the present case) by removing the solvents. The next set of droplets was then dispensed at an offset, as shown in Figure 2(A).

In order for these to adhere to the previously formed pillar, we rely on the fact that the surface forces of the droplets scale as r2, while the inertia forces scale as r3, where r is the radius of the droplet. This allows for strong adhesion forces for the droplet as compared to its inertia forces (i.e., weight) at length scales of 100 μm or less. As a result of this scaling, the printed droplet adhered to the pillar rather than falling off of it. The platen heat then removed the solvent, so that the pillar is ready to receive the next droplet containing silver nanoparticles.

This process was continued until a full lattice was formed. Figure 2(B) presents a schematic of the lithiation for a 5×5×5 lattice and a dense block of equivalent overall size. The charge carrying capacity of the lattice electrodes is significantly higher than that for the block electrode for the same amount of charging time. Figure 2(C) presents representative scanning electron microscope (SEM) images of printed 3D electrodes showing complex lattice geometries and porosities at different length scales. The printing produced controlled porosity at an approximately 100–300 μm length scale, while a smaller porosity at a 1 μm length scale was obtained from sintering of the nanoparticles [9]. The percentage of smaller porosity can be controlled from 1 percent to 20 percent by varying the sintering temperature [10]. The hierarchical porous electrode structures shown in Figure 2(C) are, to the best of our knowledge, the first such reported. 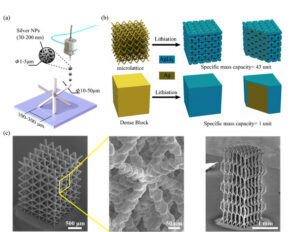 Figure 3(A) shows a 450 μm thick lattice electrode fabricated by 3D printing. Figure 3(B) shows the comparison of the electrochemical performance of the lattice samples (chart lines A1 and B1) and block samples of similar overall dimensions (C1 and D1) in terms of specific capacity. The lattice samples have a significantly improved specific capacity— up to four times that of the block samples— and nearly the highest reported value in the literature for Ag (290 mAh/g) [11]. Note that our samples are much thicker than those discussed in Jung and Lee [11]. We also measured the areal capacity, which showed that the lattice sample (A1) has achieved an areal capacity of 5 mAh/cm2 in the first cycle, which is twice that of the block sample.

Figure 3(C) compares the average specific capacity for both lattice and block electrodes. Despite some variation among the samples (which might be caused by different material batches), it can be confirmed that the lattice electrode structures significantly enhance the battery performance when compared to the block electrode structures. Further, after 40 electrochemical cycles, the electrode lattice shape was intact upon disassembly of the coin-cell battery during our tests, which implies a robust electrochemical-mechanical property [9].

The mechanical properties of the proposed electrode are also very promising. In order to examine any possibility that the porous electrode structures fabricated using 3D printing could act as structural materials [12], we conducted a mechanical test. The 3D lattice electrodes shown in Figure 2(C) were subjected to compressive loads in an Instron machine with an appropriate load cell, and simulations were carried out to capture their behavior. Figure 4 shows the results of the structure under compression and the corresponding stress-strain diagrams for lattices.

At first, the material acted as a cellular structure (similar to honeycombs), absorbing a large amount of deformation without failure. Strains in excess of 50 percent could be tolerated by the structure. The plateau stress could be increased by 400 percent by coating the electrode structures with a nanometer scale metallic layer. This demonstrates that the 3D printed battery electrodes can be used as structural materials.

The 3D nanoparticle printing process is extremely rapid. For example, a droplet of electrode material (20 μm diameter) can be printed in 4–10 milliseconds. Commercially available aerosol jet machines allow up to four printheads to operate in tandem, which further increases printing speed. And heating the platen can quicken the evaporation rate, allowing the structure to form rapidly with optimized printing programs in commercially available software (such as AutoCAD/AutoLISP). It is possible that the printing could be extended to the inkjet process, existing systems of which have thousands of printheads working in tandem. With this rapid printing process, it is possible to manufacture electrodes in high enough quantities to serve DoD power requirements.

We have established that our 3D printing method leads to the production of lattice electrodes with controlled hierarchical porosity present in three dimensions. Such electrodes enhance electrolyte transport through the electrode volume, increase the available surface area for electrochemical reaction, and relieve the intercalation-induced stress. Combined, these advances lead to an extremely potent high-capacity battery system. Future work will involve building 3D-architected electrodes from various anode and cathode materials by considering unique material properties of individual materials. Furthermore, the developed 3D-structured electrode can be integrated with structural components. We will explore building a prototype that demonstrates a hybrid structure (such as UAS wings) that also acts as a battery device—leading to versatile transport technologies that allow the structural parts to act as batteries themselves.

Figure 4. 3D printed electrode acting as a structural material. (A) Results showing the stressstrain response of the lattice electrodes under compressive load. The plateau stress reached about 5 MPa (stress calculated using area of a solid block of equivalent dimensions). The strength could be further increased by 4x by a nanolamination process in our lab. (B) Schematic of a drone wing having lattice batteries forming its wing.

Conclusions and Implications for DoD

In this study, we demonstrate a 3D printing method that can create lattice electrode architectures for robust Li-ion batteries with high capacity. The specific charge capacity and areal capacity of the 3D electrodes are shown to be several times that for comparable solid block electrodes, indicating the effectiveness of electrolyte penetration in the porous structure and improved utilization of electrode active material during the lithiation/de-lithiation cycles.

These improvements could have significant implications for DoD’s provision of mobile, battery-based power to the dismounted warfighter. Using the electrode system discussed in this article could potentially result in a battery weight reduction of up to 50 percent (for the same energy density). The load of a battery pack on a warfighter in combat is considerable, and any weight reduction that doesn’t compromise functionality will provide significant benefits. The improved power characteristics of our battery design could also extend to small- to medium-sized UAS and other vehicles that could store charge within structural components, thus increasing their operational range. The 3D printed lattice technology presented above may lead to an important battery solution for multiple DoD missions and needs.

The authors would like to thank Chunshan Hu and Rit Bezbaruah for several images.