Shape Memory Alloy as an Artificial Actuator for Exoskeletons – HDIAC

Shape Memory Alloy as an Artificial Actuator for Exoskeletons

Whether for injury rehabilitation or performance enhancement, the ultimate goal of exoskeleton research and development is to produce a wearable, human-like robot capable of detecting and enhancing the intended movement of the user. During rehabilitation, exoskeletons can be used to assist in the muscle retraining process. An example of this is when a neuromuscular injury is sustained that affects the injured warfighter’s ability to walk. An exoskeleton can be used to move the person’s leg to mimic their gait cycle, which retrains their muscles and can quicken the recovery process [1]. Exoskeletons can also be designed to enhance user strength and increase battlefield performance—such as the United States Special Operations Command’s Tactical Assault Light Operator’s Suit (known as TALOS) and those being developed through the Defense Advanced Research Projects Agency’s Warrior Web Program. Exoskeletons may also be used to redistribute the load carried by the warfighter, which may reduce the number of injuries sustained by members of the U.S. Armed forces.

The most predominate actuation methods of modern exoskeleton designs include electric motors [2,3] or hydraulic actuators [4]. While these actuators can replicate simple joint movements such as knee flexion and extension, they are not able to replicate the naturalistic motion achieved by human skeletal muscles. These traditional forms of actuation are also limited to rotation about only one axis even though most joints in the human body have multiple degrees of freedom.

Unlike classical rotational or “pin” joints actuated by electric motors, rigid bones in the body are connected at the joints via soft tissue, such as ligaments, that restrain movement but still allow for multiple degrees of freedom. A more naturally operating actuator would allow for exoskeletons to account for these additional types of joint motions and create a more fluid, human-like movement of the exoskeleton.

Due to the limitations associated with traditional actuators, research into novel actuators and soft robotics has increased. This includes, but is not limited to, shape memory alloys (SMA), shape memory polymers, dielectric elastomer actuators, and pneumatic artificial muscles. These actuators look to improve on the degrees of freedom, weight, and noise limitations of traditional motors and hydraulic actuators. These advancements could have an especially significant impact on performance enhancing exoskeletons by allowing a warfighter performing
complex motions to wear additional armor while moving naturally and silently.

Shape memory alloys are typically manufactured as cylindrical wires and have been used as micro-actuators because they have a high strength-to-weight ratio compared to traditional actuators [5, 6]. Nitinol, an SMA that has a nearly equiatomic composition of nickel and titanium, is one of the most commonly used SMAs because it is commercially available (~$2 per foot), biocompatible [7], and has a functional strength of 25,000 pounds per square inch [8]. Nitinol exhibits two interesting effects that cause large amounts of recoverable strain in the material. When the temperature of nitinol is held constant and the stress is varied, the material exhibits the pseudo-elastic effect, also known as the super-elastic effect.

An increase in stress results in the formation of stress-induced martensite which causes the wire to extend. When the stress is reduced, the material returns to the austenite phase and recovers the strain. (This effect has been demonstrated by a protype glove, as illustrated in Figure 1.) The shape memory effect occurs when the stress is held constant and the temperature is varied. For linear nitinol actuators, the applied load will stretch the martensite phase and increase the wire length.

The temperature is then raised to the austenite transformation temperature and the nitinol contracts and the wire length is decreased. The shape memory effect is the dominate effect when nitinol is used as a linear actuator, but if the stress of the system varies, the super-elastic effect plays a role as well. SMAs do have limitations such as their actuation strain, which is normally 4 to 6 percent of the actuator’s entire length [9]. Along with limited strain, large force SMA actuators have shown to exhibit a high power consumption to achieve realistic actuation times for use as an artificial muscle [10].

Biomimicry is the practice of imitating naturally occurring structures or processes to solve complex engineering or design problems. Since SMAs possess the ability to contract and expand in a similar fashion to human muscle, they are often referred to as “artificial muscle actuators.” However, the geometry of human muscle fiber groupings are more intricate than simply bundling multiple wires together in a parallel configuration. A sarcomere forms the base unit of skeletal muscle and is constructed with overlapping layers of myosin and actin filaments that achieve a decrease in length by sliding over each other. This is known as the sliding filament theory [11]. Sarcomeres are connected in series along the length of the muscle to form a single myofibril (see Figure 2). This article proposes to use biomimicry of natural sarcomere and myofibril organization by placing an additional fiber into the center of a bundle of SMA wires (see Figure 3). This additional fiber will serve the purpose of conducting heat directly to the surrounding SMAs, thereby contracting the SMA fibers and replicating the sliding filament effect.

Nitinol is the SMA chosen for this design as it is commercially available and inexpensive. This alloy can also be pre-trained to contract when heated and extended when cooled. In most applications of SMA actuators, resistive heating is used to raise the temperature of the material and free convection with ambient air is used to lower the temperature [12,13]. However, resistive heating causes a high power consumption for the system. This is especially evident when multiple wires are aligned in a parallel configuration.

In order to increase efficiency, this design calls for a secondary material to conduct the heat directly into the SMA. The material chosen as a secondary heating element is nichrome. Nichrome, a nickel-chrome alloy, is commonly used in resistive heating applications due to its resistance to oxidation and high temperature stability. Electrical current is passed through the nichrome, which results in a temperature rise. This design is configured similar to that of a natural myofibril, with a central nichrome wire and 10 smaller Nitinol wires placed around its circumference, as shown in Figure 3.

In the model, the nichrome core was wrapped in Kapton tape (orange layer in Figure 3) to prevent current passing directly to the SMAs, and then thermal paste was applied to increase heat conduction between the nichrome and SMA. The diameter of the SMA was set to 0.008 inches, which corresponds to a published maximum pulling force of 1.26 pounds per wire [8], totaling 12.6 pounds pulling force for the proposed artificial myofibril design. The overall effective diameter of the configuration is 0.035 inches, which is approximately 20 times smaller than the diameter of a U.S. dime. The effective diameter includes a 0.016 inch diameter nichrome core, a 0.008 inch SMA wire, and a 0.0015 inch thick layer of Kapton insulation. 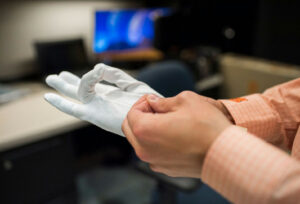 Figure 1: Demonstration of how nitinol actuator woven into glove would assist in finger flexion.

For this analysis, the operational temperature range of the nitinol wire was set from 70 C to 105 C, which corresponds to an actuation strain of 4 percent the length of the wire [8]. A finite element thermal analysis in Solidworks was applied to the configuration to assess the transient thermal behavior. A contraction time of less than 1 second was chosen as a desired output of the design, as this roughly corresponds to the natural cadence of human gait. The input power was increased until the transient response yielded a contraction time of less than 1 second and found to be 4.25 watts. 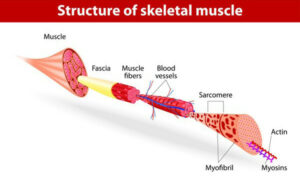 The proposed artificial myofibril design utilizes multiple nitinol wires positioned circumferentially around a secondary material, nichrome, used as a heating element. With this design, multiple actuators can be grouped together to form an artificial muscle fiber similar to the natural groupings in human skeletal muscle. Furthermore, since the actuator is a single artificial myofibril, the overall strength of the actuator can be altered by increasing or decreasing the number of actuators in a single muscle grouping.

Ultimately, an exoskeleton can be fitted with an actuator of this type, which would allow for the development of a custom artificial muscular system that would move more naturally, like the muscle system of the individual using the exoskeleton. This type of actuation holds the potential for an improved machine-human interface as the artificial muscles can be stimulated by electromyography signal of the warfighter’s muscles. Additionally, this design will allow for actuation of exoskeleton joints around multiple axes. If exoskeleton limbs could replicate complex joint motions, it would allow the user to accomplish more complex tasks without inhibiting their own motion.

This technology is not limited to exoskeletons but can be applied to robotics in general. For example, Military Services members may sustain injuries resulting in the loss of a limb, which could require a prosthesis. Many common prostheses have no means of active actuation, and the SMA actuator would allow prostheses to be actuated by a low-cost, low-weight, and silent actuator. Actuated prostheses would increase functionality by allowing the user to be able to do tasks that they could not do otherwise. 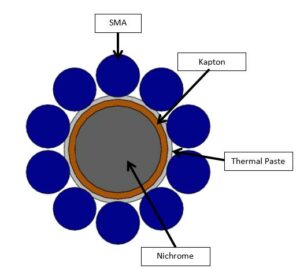 This simulation has limitations that must be considered. First, it does not take into account the latent heat of transformation that occurs as the material transitions from martensite to austenite. Also, as the material changes phase, its properties (such as electrical resistivity, thermal expansion coefficient, and elastic modulus) also change. Lastly, the simulation does not account for the relative length change between materials during operation. Future work will involve incorporation of each of these effects during more advance simulations.

The presented design and theoretical model of a novel artificial actuator utilizes shape memory alloy wires positioned circumferentially around a central nichrome heating element to produce muscle- like contractions. Utilizing biomimicry to replicate the geometry and microscale movement of human skeletal muscle has the potential to lead to an efficient, high strength artificial muscle actuator for use in exoskeleton technology for the warfighter. An exoskeleton with greater ability to produce more natural, human-like movements will improve the ability of the device to contribute to neurological injury rehabilitation as well as improve the performance of the warfighter on the battlefield.